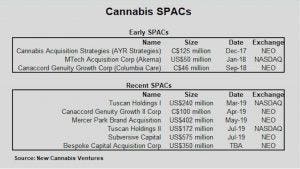 Publicly traded cannabis companies have been slumping through the spring and summer, but investors are still willing to throw nearly wads of cash at cannabis companies, with nearly $2 billion of blank check companies gone public or pending since March, according to New Cannabis Ventures.

There have been five blank check companies that have gone public since March on the Nasdaq and NEO, a Canadian exchange, with more than $1.46 billion in capital to deploy, according to New Cannabis Ventures, an industry news and research firm. Another, Bespoke Capital Acquisition Corp., has filed to go public with an aim to raise $350 million. That total, $1.8 billion, dwarfs the $210 million raised through three blank check cannabis funds listed since late 2017, according to the publication. Blank check companies are formally known as Special Purpose Acquisition Companies (SPACs), companies that raise money for a future, often yet-to-be-determined, investment purpose. After a long lull in the SPAC space after last decades financial crisis, SPACs have returned in recent years, most notably as a vehicle for known oil executives to launch new energy companies and in the acquisition of Chuck E. Cheese.

“The investment into these SPACs is a clear sign of the interest in our sector, and the deployment of this capital is quite bullish for privately held cannabis companies looking to go public,” writes Alan Brochstein in his July 21 New Cannabis Ventures newsletter. “The trend, though, may be a slight negative for current public companies, as investors are opting to bet on these blank check companies, without even knowing what they will ultimately acquire rather than those that are currently trading despite the recent pullback in prices. Additionally, the ability to use cash to fund acquisitions may put the SPACs in a competitive advantage over other public companies looking to pursue M&A.”

There’s a spate of SPACs for cannabis

Indeed, publicly traded cannabis have been weak of late. The two largest cannabis companies, Canopy Growth (CGC) and Aurora Cannabis (ACB) are down more than 30% from their recent highs in March and April, respectively. The leading cannabis ETF, Horizons Marijuana Life Sciences Index (HMMJ.TO), is down 32% since March – in part because it is more than 20% weighted in Canopy and Aurora. Blank check companies likely won’t do much for the largest cannabis firms – SPACs typically look to acquire privately held companies, a move that is particularly attractive in cannabis where the questionable federal status in the U.S. makes going public by traditional means more difficult.

Are cannabis SPACs a buy? Brochstein rightly notes that investors are better off waiting until these firms have announced or closed their acquisitions. SPACs have historically been highly speculative investments.

In addition, recent SPACs that have completed their acquisitions have been volatile. “The Columbia Care (COLFX) deal has suffered a substantial price decline that prompted a share repurchase announcement, AYR Strategies (AYRSF) has given up a lot of gains, and Akerna (KERN) went on a rocket ride and quickly returned to earth. We look forward to sharing with our readers how this capital is deployed over the next couple of years,” Brochstein notes (emphasis and tickers added.)

Any inflow of capital into a sector is a positive, so take the spate of SPACs as a plus for the long term. But the biggest beneficiaries right now are likely to be the private equity investors of cannabis companies looking to cash out.