Nobody recommends driving while high.

But years into legalization, it’s not clear if stoned drivers have become a hazard that demands a response. Even if they were, nobody would know what to do about them.

Blood alcohol content and impairment generally rise in parallel, and the alcohol leaves the body relatively quickly. Breathalyzer tests are a quick and non-invasive way to tell if a driver is drunk.

But testing for stoned drivers isn’t as straightforward. Some jurisdictions, including Colorado, have set standards for what constitutes cannabis impairment, such as five nanograms of THC per milliliter of blood. But there is no linear correlation between blood THC concentration and impairment, and testing requires a blood or saliva sample.

What’s more, THC stays in the bloodstream for weeks – so compared with alcohol, its presence reveals less about a driver’s condition. These complications have made it a challenge to gauge whether legalization makes the roads more hazardous. Some areas have laws that define a pre-determined concentration of THC in the blood as illegal whether or not the driver appears impaired.

As a result, while marijuana can impair motor skills, the available data, as discussed in a 2017 report by the US National Highway Traffic Safety Administration, suggests the odds of being involved in a crash immediately after using cannabis are significantly lower than crash rates after drinking. 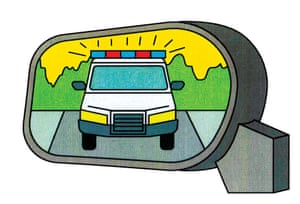 The stock explanation is alcohol makes drivers more aggressive and accident prone, while drivers who are high are more likely to drive too slowly. Several studies cited by NHTSA suggest this is broadly correct.

So while it’s generally illegal to drive while high, it’s not clear if stoned driving is a serious problem or if police tactics can do much about it. Nonetheless, public safety considerations require places with legal cannabis to think about the issue and sometimes take action.

Before legalizing recreational use in October, Canada approved one device, the Dräger DrugTest 5000, as a roadside spit tester for THC. But questions have been raised about its accuracy; it is known to deliver both false positives and false negatives. And when it measures correctly, it doesn’t claim to assess the subject’s fitness to drive. Another problem: the device only works at temperatures between 4C and 40C. It’s useless during Canada’s long cold winters.

The country has recently approved a second THC saliva test, the Abbott SoToxa. Six months after legalization, Canada’s federal law enforcement agency, the RCMP, said there had not been a surge in charges for driving high.

But driving high happens. The California delivery service Eaze recently surveyed cannabis users on how they get around.

It found 64% of cannabis consumers self-report driving within four hours of consuming cannabis and 20% say they drive within an hour after consuming. There was no consensus among consumers about how much cannabis is safe to take before driving. (They were less likely to drive stoned with a child in the car.)

Of adults who consume and drive, 77% believe it doesn’t affect their driving and 16% believe it improves their driving, according to the survey. Men and younger drivers are more likely to drive within eight hours of consuming.

A new law in California directs the state highway patrol to research better ways to determine an evidence-based response to stoned drivers. Until we have one, it will be another aspect of marijuana legalization that raises more questions than answers.