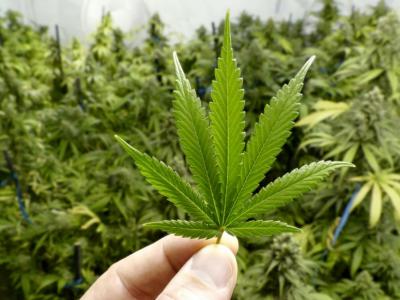 Previous studies have shown that both marijuana and CBD could be used as a potential exit drug out of opioid addiction, with other, less widely used options like buprenorphine and methadone also available for those struggling with opioid dependency. But for those with cannabis use disorder, the available strategies have been far more limited.

Now, an Australian study published Monday in JAMA Internal Medicine demonstrated that one substance that could potentially curb cannabis dependency is cannabis itself. This doesn’t mean patients should consume more marijuana or anything like that. Instead, Australian scientists used a cannabis-based medicine called nabiximols to provide the first evidence that “cannabinoid agonist medication” targeting receptors in your brain can diminish the rate of relapse.

In a series of experiments, researchers tested regular marijuana smokers with two different substances. One group was given nabiximols, which is a spray placed underneath your tongue and comprised of equal parts cannabidiol (CBD) and tetrahydrocannabinol (THC). The other group was given a placebo. The study found those on nabiximols smoked 18.6 less days than those on the placebo.

“We’ve never had the evidence before that medication can be effective in treating cannabis dependency—this is the first big study to show this is a safe and effective approach,” said Nicholas Lintzeris, Ph.D., the lead study author and addiction medicine specialist at the University of Sydney School of Medicine.

“The principles are very similar to nicotine replacement; you are providing patients with a medicine which is safer than the drug they’re already using, and linking this with medical and counselling support to help people address their illicit cannabis use,” he added.

Lintzeris said an important element of the study was recruiting only cannabis users who had previously attempted to lower their marijuana usage but could not on their own. Another key component was adding cognitive behavior therapy (CBT) as well as therapeutic support to elicit a more holistic approach.

Said Lintzeris, “Our study is an important step in addressing the lack of effective treatments—currently, four in five patients relapse to regular use within six months of medical or psychological interventions.”

This article was originally posted on The Fresh Toast.

Is It Possible To Be Addicted To Cannabis?