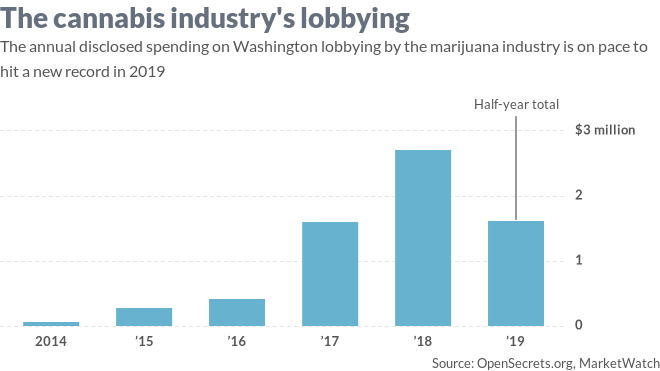 As the cannabis industry keeps growing, it’s on track to set a fresh record in its spending on lobbying Washington.

After shelling out $2.7 million to influence lawmakers and regulators in 2018, the industry has disclosed outlays of at least $1.6 million in 2019’s first half, putting it on pace for a new spending record by year’s end. This year’s total at the halfway mark already slightly beats 2017’s overall figure.

The outlays on lobbying come as members of Congress roll out a range of bills that would affect the industry, such as the STATES Act, which aims to protect U.S. states that have legalized marijuana, and the SAFE Banking Act, which seeks to help banks that serve cannabis companies.

Related: Republicans and Democrats agree that U.S. marijuana laws are a mess

To be sure, the sums involved fall short of the lobbying spending by bigger Washington players. Facebook Inc. FB, -1.93%  alone, for example, spent $7.5 million on trying to influence Washington in this year’s first half. But the stepped-up lobbying is another sign that the pot industry is becoming more like other sectors. One cannabis company executive — Mark de Souza, CEO of Illinois-based Revolution Enterprises — said in an interview this month that the increased lobbying also has to do with conflicts with other types of companies.

“The cannabis industry is definitely coming up against several industries, whether it be Big Alcohol, Big Tobacco, maybe even Big Pharma,” he said. “So I could see the justification for the industry as it’s growing to start to want to have a voice and a seat at the table. Any time an industry comes in and is disruptive on any level, there’s always going to be some friction.”

Disclosures of second-quarter spending that were filed this month show that two cannabis companies that were among the industry’s biggest spenders in Washington last year — Curaleaf Holdings Inc. CURLF, +0.68%  and Surterra Holdings Inc. — spent $200,000 and $120,000, respectively, in Q2, as they lobbied on matters such as the STATES Act and the SAFE Banking Act. The Cannabis Trade Federation laid out $190,000 in the period and lobbied on issues like the STATES Act and the Marijuana Justice Act, which aims to legalize the drug at the federal level and expunge criminal records. Other cannabis-industry players lobbied in Q2 on matters such as patent and trademark protection or medical-marijuana regulations.

Cannabis Trade Federation CEO Ned Levine said Thursday that the STATES Act continues to be his industry association’s “top priority,” noting that it would “resolve the state-federal cannabis conflict.”

“We are pleased to see significant momentum building behind the push for cannabis-policy reform at the federal level,” Levine said in a statement. “From our perspective, it is especially pleasing to see the growth in bipartisan support for the STATES Act, which now has 60 co-sponsors in the House, including 15 members of the Judiciary Committee.”

Revolution’s de Souza also sounded upbeat on the SAFE Banking Act’s prospects in the next year and a half, even as analysts are pessimistic on its chances of becoming law in the near future.

“Given the pace that people are holding hearings and committee meetings, I would think there’s a possibility something comes to fruition or at least to a vote sometime in 2020,” he said.

Curaleaf and Surterra didn’t respond immediately to requests for comment.

Pot stocks are underperforming the S&P 500 this year, hurt in part by scandals and regulatory issues. The ETFMG Alternative Harvest ETF MJ, -1.70% — which tracks a basket of such stocks — is up 14% vs. the broad equity benchmark’s SPX, -0.53% gain of 20%. This week, the marijuana ETF has dropped to levels last seen in January, while the S&P has achieved a fresh record close.