For those Americans who have been introduced to the legend that is cannabidiol (CBD), they have found themselves smack dab in the middle of a bizarre circus that rivals a Bangkok ping pong show. Only in this performance, one that can be found on nearly every street corner in the nation, there is a bearded hipster in an Arcade Fire t-shirt screaming at the top of his lungs “Get Your CBD Here!”

Yesiree, step inside one of these trend dens of the cannabis-lite movement and prepare to be fed a long-winded spiel about how this non-intoxicating cannabinoid is a miraculous cure-all put here by the gods of the universe to keep all of humanity from succumbing to the despicable sick sent here to obliterate us. Having trouble sleeping? Anxious? Are traditional cancer treatments not working? Having trouble staying dry in the rain? Well, well, well, CBD might be right for you!

It’s no wonder so many folks believe this lone cannabinoid is either modern-day snake oil or the magical spawn of aliens and unicorns. They are on sensory overload with all of the non-stop jibber jabber.

The ones that have listened to the sales pitch and said to themselves, “whatever, I’m not buying into the hype” they are well on their way to getting out of this big top of insanity with their dignity still intact.

But these folks are the minority.

There is no denying that a lot more people than not are sold on this alien-unicorn CBD baby. But then again, these blind faith believers are presumably among the same cult of popular American culture who yell out “Freebird” down at their local tavern, eat at Red Lobster and support Donald Trump. So, let’s just say they might not be the brightest of the bunch.

Now, before anyone gets too upset, there is evidence to support this. I’ll touch on that in a few paragraphs.

Regardless of whether the health benefits of hemp-derived CBD are real or a scam, this business sector, one that was given new life with the passing of the 2018 Farm Bill, is raking in more cash than a Mississippi pimp.

Depending on which study you choose to accept as gospel this week, the CBD industry is well on its way to being worth somewhere in upwards of $20 billion. That’s a heck of a lot of money for a product that may not be as miraculous as they say, and a whole lot more for one that can’t get you high.

It’s strange because it’s not like America is on the wagon or anything.

The US population possesses more drunken enthusiasm than a night out with Jackson Pollack, Earnest Hemingway and Martin van Buren. Studies show that 40 percentof the population is getting hammered in ways that put them at risk of hangovers, DUIs and liver disease. The American people also have a real love affair with opioids, methamphetamine and cocaine. What can we say, we’re big fans of the buzz. And this obsession with mind-altering substances is not because they have special healing powers, it’s because they make us feel freaking fantastic. In the immortal words of a 20th-century poet by the name of Kramer, “Here’s to feeling good all the time.”

Heck yeah, America is onboard!

But when it comes to this CBD craze, for whatever reason, the people are content with spending their hard-earned money not to feel anything at all. And I mean zilch, nada, zip, isn’t happening.

There is even evidence that this buzz-free cannabis movement could eventually surpass the money machine in legal marijuana states – where they are selling products that actually get people stoned – and become the king of swinging ding dongs on the US cannabis scene. What the hecking f**k?

It’s just difficult to imagine that unregulated hemp-based CBD products that don’t produce the buzz that Americans are so crazy about are becoming such a huge hit. But all you have to do is step inside any given truck stop, mall or convenience store and you’ll see this wild scene in action. Just last week, I spotted a CBD display next to lottery tickets. Want to guess which one I bought? Hey, at least with the lottery ticket, there was a chance I might feel something, even if it was only buyer’s remorse.

So, is this hemp-derived CBD really worth a damn?

Also, I doubt eating CBD-infused bratwursts and smoking hemp flowers is the key to a healthier lifestyle.

But these things are trendy right now, and that’s all some folks need to jump in with both feet.

So just who in the heck are all of these people buying CBD products, anyway? 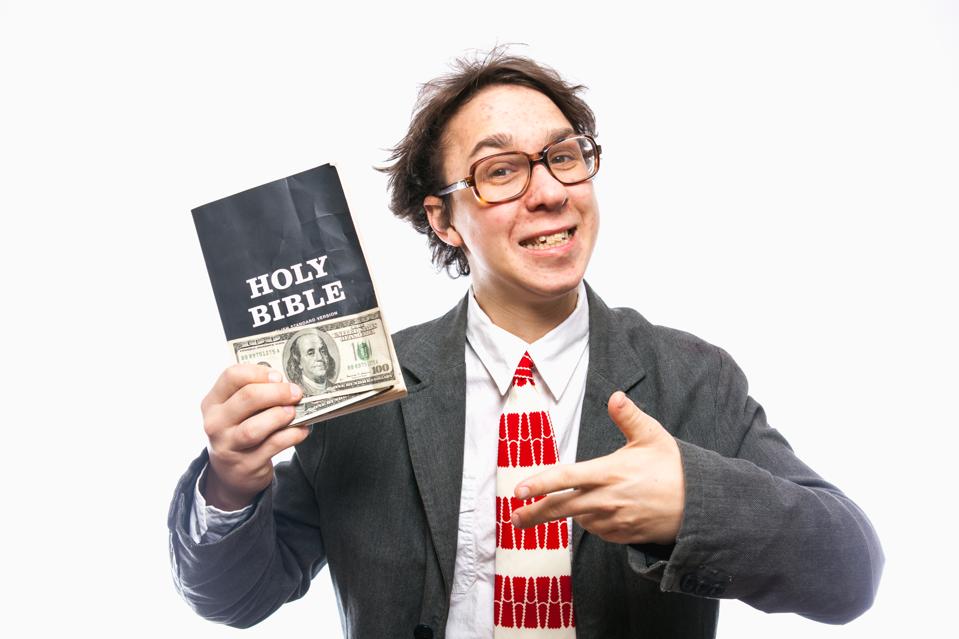 „God, church, money, and the state. An image showing these four things in one. Conceptual open ended image. Shot on white background.”

Well, considering that a religious materials store called Christian Bookstore Distributors (CBD) recently had to change its name because a legion of CBD customers kept calling their offices to check on the status of their orders, I’m going out on a limb and saying that these people might be at the lower end of the food chain.

Listen, you can’t make this stuff up.

There were apparently hordes of CBD fiends calling this bible dealer regularly to see what the heck was taking him so long to ship their gummies. Not even that they were dialing 1-800-CHRISTIAN tipped them off to their mistake. Seconds before the call, I imagine it sounded something like:“Maybe that there Christian fella can tell us where them CDB gummies went?”

It’s just funny that grown adults are so in the moment that they’re not even paying attention to where they’re ordering this stuff. I wonder what other critical details they are missing?

For the record, there is no universal cannabis store responsible for selling Americans CBD. If you order it from a certain dealer, they’ll be the ones to help you find your missing gummies.

Owner Ray Hendrickson, who probably wishes by now that he would have gotten into the CBD business, told the New York Times that the CBD craze had overwhelmed his brand, giving him no choice but to change the company’s name. It is now called Christianbook. But he’s smart. He still owns the domain CBD.com.

Again, who are these people?

Some of the latest statistics from High Yield Insights show CBD users are mostly “stressed out millennials” between the ages of 21-and-35 and baby boomers 56 and older. These folks are buying up a variety of CBD products to treat every condition from anxiety and depression to chronic pain, inflammation and insomnia. Most CBD customers are not well educated, the report shows.

This might be part of the reason they are seemingly unaware that a lot of these CBD products – at least the ones sold online – are not manufactured under the highest standards. And maybe their oblivion gives them the courage to disregard the potentially dangerous counterfeit CBD products showing up in smoke shops and convenience stores all over the country. Let’s just say if you’re buying CBD “medicine” from a 7-Eleven, it might be time to reconsider everything.