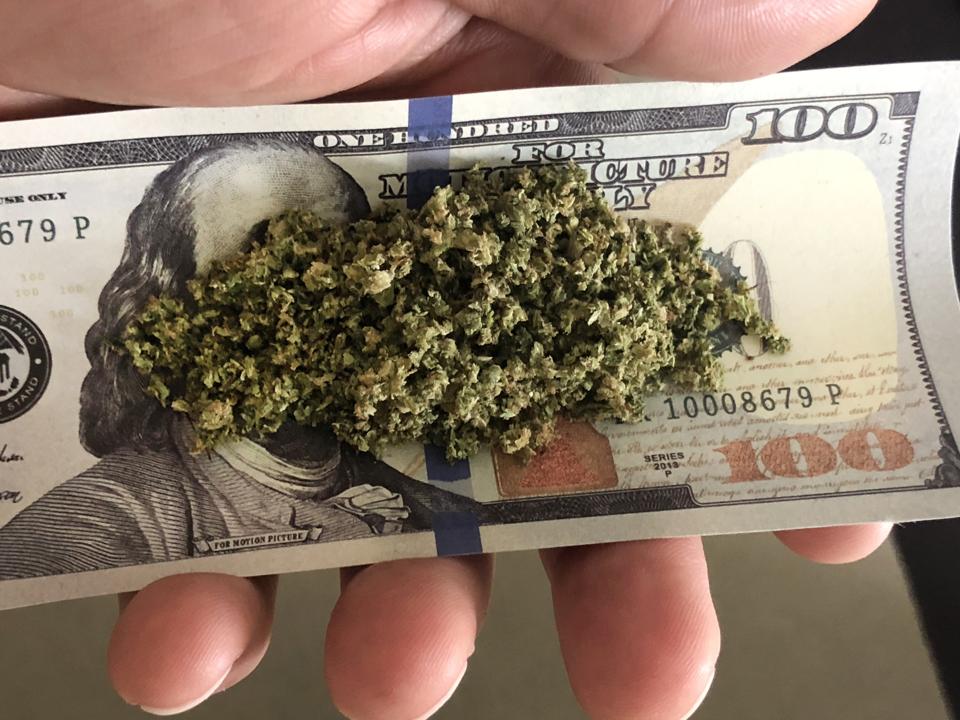 A bunch of marijuana on a $100 bill that a man is holding.

There might be some significant changes coming to the Florida cannabis industry as a Florida court rules that vertical integration is „unconstitutional.” This ruling comes four months after the Florida House rescinded a ban on smoking medical marijuana. Meanwhile, Florida Governor Ron DeSantis’ reversed his position and walked back his stance on vertical integration.

A timeline of Florida’s pot politics

In January, newly-appointed Florida Governor Ron DeSantis’ dropped a bombshell announcement to drop his predecessor’s appeal against legalizing cannabis flower for medical marijuana patients. His surprise announcement contained a largely unreported nugget that he is also in favor of getting rid of vertical integration for licensed cannabis operators in the state. Doing so would allow for individually licensed cannabis businesses instead. Governor DeSantis’ remarks about wanting to eliminate vertical integration came as a shock to most, considering Florida’s historical stance on limited cannabis licensing in the state.

„The way they did this vertical integration is not [based on] free market principles,” said the Governor.

In March, the Florida House rescinded the medical marijuana smoking ban. On March 12, the Florida Medical Marijuana Legislative Policy Conference, at Florida State University Conference Center, decided that it is better for the Sunshine State and the environment to have an open hemp program. The hemp program is regulated much differently than the marijuana program. Florida’s hemp program does not have any license caps. Anyone who wants to participate can apply for a license for industrial hemp or CBD consumption. Additionally, several other cannabis bills were pending in Florida.

On May 3, leading politicians gathered in South Florida to discuss potential modifications to the state’s marijuana laws.

What is Vertical Integration?

Phasing out vertically integrated licenses is suitable for the inimitable Floridian market because it will allow for more products and more selection, plus smaller companies will be able to participate. Currently, cannabis companies may only sell the products they make. Therefore, MedMen, for example, cannot sell Harvest products and vice versa.

Abolishing vertical integration should open the market to the point where retailers can sell practically any product they choose. Mixed retail is especially important for patients because currently, there are few dispensaries in the state. Therefore, if one dispensary runs out of stock of a patient’s preferred product, that patient will likely be forced to go to a local competitor who does not necessarily carry the same products.

A 1st District Court of Appeal decision in Florida’s capital of Tallahassee called the current, vertically integrated system „unconstitutional” for the way it caps licenses and allows a few select companies to have a monopoly on the cannabis supply chain — they must cultivate, process, package and sell medical marijuana without bringing on ancillary businesses to handle different aspects of the pot pipeline.

Because this case deals with the constitutionality of a state statute, it will ultimately reach the Florida Supreme Court. The briefing and arguing of such cases usually take a year to 18 months from start to finish.

Florida-based Attorney John Lockwood explains the court’s ruling and how it will effect the state’s market. He predicts that Florida will end up with a hybrid system that will grandfather in the existing 22 vertical licenses. Then the state will issue some dispensary and cultivation permits, and other grants of a similar nature. Beyond that, the legislature is going to have to work at creating perhaps some additional licenses that are horizontal in scope, while ensuring that there is no product diversion. Additionally, it should be handled in a way that can be easily regulated and monitored by the Department of Health.

Florida’s policymakers have historically had issues with having a marketplace where multiple companies could potentially be involved in the product offering from seed to sale. Predictably, if Florida does convert to a market inclusive of horizontal licenses, it will be limited in scope and highly regulated.

„Most likely, the conventional wisdom is that those licenses will also be limited in scope and will be tied to the patient population. I don’t envision a scenario in which we are essentially an unlimited license type jurisdiction. Almost every type of industry in Florida of this nature, including alcoholic beverages, gambling, is highly-regulated and a limited market in Florida. And the legislature is very involved in policymaking,” Lockwood says.

Lockwood believes whatever stems from the court’s decision will proceed similarly. „The legislature is keen on keeping this as medicinal as possible. Concern about product and version is what triggered the desire originally to have a vertical marketplace, seed to sale. You had one company that was in charge of the product at all points,” he says. „Certainly having a market place where it’s unlimited license, and it’s a completely horizontal scheme, the Department of Health just isn’t capable of regulating something of magnitude, especially in a state size of Florida.”

According to News Service of Florida, the July 9 ruling by a trio of male judges –comprised of Scott Makar, James Wolf and T. Kent Wetherell (who incidentally is now a Federal judge)– provided Florida Department of Health officials “a reasonable amount of time” to begin registering medical marijuana operators.

The court’s decision “is of exceptional importance because it implicates whether the entire regulatory framework currently in place for the licensing of medical marijuana treatment centers should be overturned,” lawyers for the state argue..

Governor DeSantis has completely reversed his position on the matter of vertical-integration. He initially spoke strongly in favor of breaking up the vertically-integrated cartels that currently monopolize the Floridian market. However, his office recently asked the appellate court to reconsider its ruling. DeSantis and health officials on Wednesday asked the 1st District Court of Appeal for a hearing by the full court, known as an “en banc” hearing.

His initial aversion to vertical-integration, followed by his full circle reversal, is potentially attributable to backchannel pressure. Lobbying on behalf of the six vertically-integrated medical marijuana businesses that currently operate 122 of the 144 dispensaries statewide, is par for the course.

For example, the majority of True Leaf’s revenue comes from the Florida market, and they’re one of the highest-ranking income-producing cannabis companies in the country. A footprint in Florida, is significant, especially for multi-state operators, with millions –potentially billions– of dollars in future revenue at stake.