An employee has a beer or two with colleagues at a local bar after the work shift is over. Another heads home for a glass of wine with dinner. The next day, there is no alcohol impairment in the worker, and that’s why an employer would not have a problem with either of these scenarios. But even in states where cannabis has been legalized, drug testing continues to search for signs of marijuana use that in no way necessarily reflects worker impairment.

THC, the active ingredient in cannabis, can linger in the body and show up in the screening process for up to 30 days after the immediate impairment of the user. Traditional THC screening cannot differentiate between actual impairment and presence due to past use of cannabis. Equating presence to impairment groups all individuals — those who use marijuana on a daily basis, for medical or recreational purposes, and those who sporadically do it — in the same category.

Backers of legalization say that is unfair and the world of work needs to adapt to changing societal norms regarding cannabis.

„There are some states, like California, where employers are completely allowed to sanction based on a drug test, even medical marijuana patients,” said Tamar Todd, vice-chair of the California Cannabis Advisory Committee and lecturer on marijuana law and policy at Berkeley Law. „An employer can basically refuse to hire you or discipline you for a positive THC in your blood even if you’re a lawful medical marijuana patient using lawfully under state law. And the legislature has not changed that law yet.”

„We get off work after a tough day, we have a glass of wine, and then go to sleep. If the next morning we were drug-tested at work, it would not show a positive level of alcohol in our system because we have honed those testings so that we can focus on the actual impairment,” said Lee Flores.

Positive results for marijuana are on the rise leading more job candidates to fail drug screens. 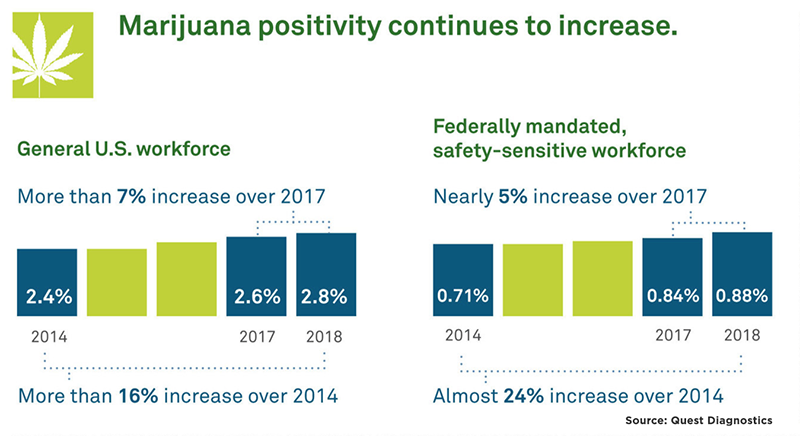 The number of positives for drugs in the workforce has reached a 14-year high of 4.4%, according to an annual analysis conducted by Quest Diagnostics, one of the nation’s largest clinical laboratory testing companies. The rates of drug use are now more than 25% higher than the 30-year low of 3.5 percent recorded between 2010 and 2012.

„Our analysis shows that marijuana is not only present in our workforce, but use continues to increase,” said Barry Sample, senior director of science and technology at Quest Diagnostics, in the study release.

Marijuana is the outlier in test positives as drug test results for opiates and cocaine decline, according to Quest’s study. Among the general workforce, opiates (mostly codeine and morphine) declined nearly 21% year over year, which was the largest drop in three years and positive test results are down nearly 37% since the peak in 2015. Positivity for oxycodones (oxycodone and/or oxymorphone) declined more than 29% between 2017 and 2018 and are down more than 46% since the five-year high in 2014.

Alaska (1.6%) is the only state among those that have had legalized marijuana where positivity rates for the drug are not above the national average, which is 2.3% of test results, according to an analysis of Quest by state. Maine (5%), Oregon (4.3%) and Nevada (4%) have the highest rates of marijuana positivity among these states.

„As marijuana policy changes, and employers consider strategies to protect their employees, customers and general public, employers should weigh the risks that drug use, including marijuana, poses to their business,” Quest said in its annual survey release.

The test of whether you have THC in your system is unrelated to whether you’re impaired at the time. It shows positive even if you used marijuana a week, two weeks ago. It’s basically like a morality test.

The number of states legalizing cannabis is increasing — Illinois just became the 11th state. Medical marijuana is now legal in 33 states. But even as drug test usage is declining, the majority of companies — 57% — still test, according to a poll conducted by the Society for Human Resource Management (SHRM) and Drug & Alcohol Testing Industry Association (DATIA).

Requiring candidates to take, and pass, pre-employment drug tests long has been a crucial part of the hiring process for many companies. But with a tight job market — the unemployment rate recently hit a level it had not seen since 1969 — and a growing legalization state map, the pool of qualified, drug-free candidates is narrowing.

This has forced companies like Excellence Health Inc., a Las Vegas-based health-care company, to stop testing for marijuana completely. And other businesses like Rye Electric, an Orange Country construction company, to overlook positive drug test results in order to fulfill staffing demands.

Companies utilizing traditional testing for THC to screen out applicants during the hiring process, could be kept from hiring a qualified professional due to the test’s inability to differentiate between actual impairment, past use or simply a false positive.

„The test of whether you have THC in your system is unrelated to whether you’re impaired at the time. It shows positive even if you used marijuana a week, two weeks ago. It’s basically like a morality test,” Todd said.

Tests need to show a stronger correlation between presence of THC in the system and impairment in order to be a justifiable reason for refusing to hire an otherwise qualified job applicant, especially in the states where medical and recreational marijuana are legal.

„With technology and time, and the fact that now there are 11 states that have recreational cannabis, I think that they are going to have the technology and the ability for a THC marker to be much more correlated to one’s impairment by THC as compared to just 'I’ve utilized this in the last 30 days’,” said Lee Flores.

Nevada recently decided the risk of excluding job candidates due to use of legal cannabis was unfair. In Nevada, where the unemployment rate is the lowest it has been since 2006 and recreational cannabis sales have been legal since 2017, a law was recently passed to prohibit employers from refusing to hire someone due to the presence of marijuana in their system.

Republican Governor Steve Sisolak signed the law in early June, which mandates that no employer fail or refuse to hire a prospective employee because the candidate submitted to a screening test and the results of the screening test indicate the presence of marijuana. The law includes an exemption for employees who operate machinery that could put at risk their own and others’ safety when under the influence of marijuana.

In California, which has struggled to grow its legal cannabis market to initial growth expectations, employers are allowed to do a post offer, pre-employment drug test. „Basically you get an offer and it’s contingent upon you successfully passing the drug test,” said Lee Flores.

Workplace consultants say employer views are changing, even if state legislation is not.

„We have companies that have been working with us for years who have always had a pretty strict drug testing policy. And they have dropped that policy now, or have dropped pieces of it,” David Lewis, president and CEO of OperationsInc, a human resources outsourcing and consulting firm, said in a recent CNBC interview.

JudI Braswell, vice president of business development at Behavioral Health Systems, which works with employers on health-care services, said companies with which her firm works are considering making changes to their policies because of how difficult finding qualified workers has become.

„For some time we have seen some industries, like hospitality and some manufacturing, hesitant to conduct pre-employment drug screening based on the difficulty in adequate staffing.That’s been a very recent thing as more states have started looking at this and looking at legalizing the drug,” she said.

Other industries have removed marijuana from their drug panels. „The labor pool is so tight that they feel like drug testing is going to prevent them from being able to staff adequately so they don’t drug test at all,” Braswell said.

Todd believes it is only a matter of time before more companies equate recreational cannabis use with a drink had on a worker’s own time.

„I think companies are making the decision themselves to move away from drug testing and basically disciplining employees based on something that’s not affecting their performance whatsoever,” Todd said. „Once the idea of legalization and people lawfully using marijuana becomes more normalized in people’s minds, it’ll lead to 'Oh, it’s sort of like alcohol. And why would we discipline or not hire a qualified candidate because they engaged in lawful activity off duty?'”