The B.C. SPCA is reminding dog owners who have cannabis in the house not to hesitate to get help if their furry friend accidentally ingests some of their supply.

Last week, an 11-week-old husky puppy named Bear was brought into the SPCA’s Vancouver branch with some alarming symptoms of a THC overdose.

Branch manager Jodi Dunlop said it wasn’t known how the dog ingested cannabis, but a toxicity test found high levels of THC in its little body.

„He seemed to be a bit tired for a puppy,” said Dunlop, who noticed right away something was wrong, after the former owners surrendered the puppy last Monday.

Soon, the husky collapsed, and Dunlop contacted an emergency veterinarian.

„By the time we got to the vet he was unconscious,” she said. „I’ve never seen a puppy that is actually unconscious from ingesting marijuana.”

Dunlop said the emergency vet bill quickly surpassed $2,000, as Bear’s system was flushed out and it was put on IV fluids for 24 hours. 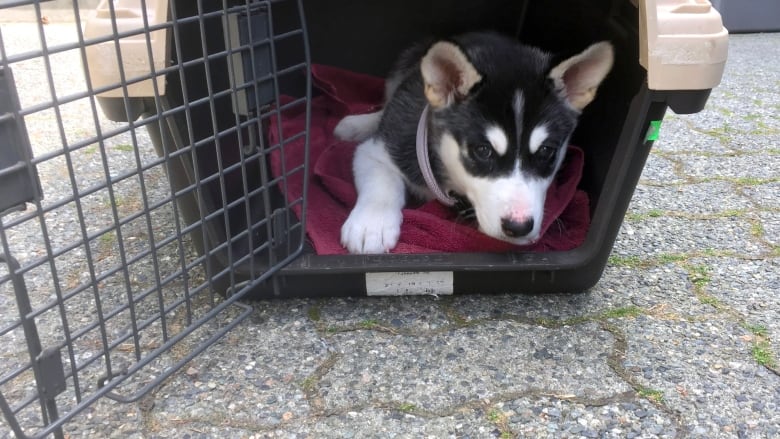 Bear, a husky puppy that was dropped off at the B.C. SPCA’s Vancouver branch, showed symptoms of having ingested cannabis before collapsing and losing consciousness. (B.C. SPCA)

The episode should serve as a cautionary tale for anyone whose pet accidentally ingests cannabis, according to Dunlop.

„I was angry, I’m not going to lie. I was kind of angry at first,” she said. „If people see this happen, come forward — don’t be embarrassed about it.”

Fatal cannabis overdose in humans is unheard of, but according to Dunlop, the frightening incident nearly killed the little dog.

She said there’s no plan to recommend charges against the former owners. On Friday, Bear was adopted into a new home.