Aphria to open pot shop in Jamaica – at a legit, real location

Aphria is opening a pot shop in Jamaica. The Leamington, Ont.-based cannabis producer said its Jamaican subsidiary Marigold Projects received a retail licence from the country’s Cannabis Licensing Authority to open its first store in Kingston this August. The company said it will open the doors to the Sensi Medical Cannabis House at Peter Tosh Square, Unit #51, noting that “yes, it is there” – a slight nod to a short seller report published in December that alleged the company’s Jamaican operations did not exist at that specific location. The retail store will include a smoking lounge for on-site consumption, accessories and proprietary cannabis strains for sale. Marigold plans to open another four retail stores in Jamaica, pending licensing approval.

Friendly Stranger gets a little (financing) help from its friends

Toronto-based cannabis accessory story Friendly Stranger Holdings landed a $5 million investment from several strategic partners, including Canadian licensed producers VIVO Cannabis and 48North. Green Acre Capital – which has a couple of sizable investment funds targeting the cannabis space – is also listed as an investor to the retailer. Friendly Stranger said it plans on using the financing proceeds to open more accessory stores as well as to launch premium adult-use cannabis retail locations across Canada, adding it will work with VIVO and 48North to obtain the proper licensing.

U.S. CBD producer Charlotte’s Web announced it is expanding its product offerings to 1,350 Kroger stores across the U.S. Factoring in its partnership with Kroger, the biggest U.S. grocery chain, Charlotte’s Web now ships its CBD products to five retail companies across 22 states with more than 8,000 locations. The company recently announced it planted its hemp in 862 acres in several U.S. states including Colorado, Kentucky and Oregon, representing a 187 per cent increase from what the company planted last year.

15%
— The amount of products sold at Planet13’s dispensary – the world’s largest – that are developed in-house, the company said in a statement. It aims to eventually raise its in-house sales to 50 per cent of total sales 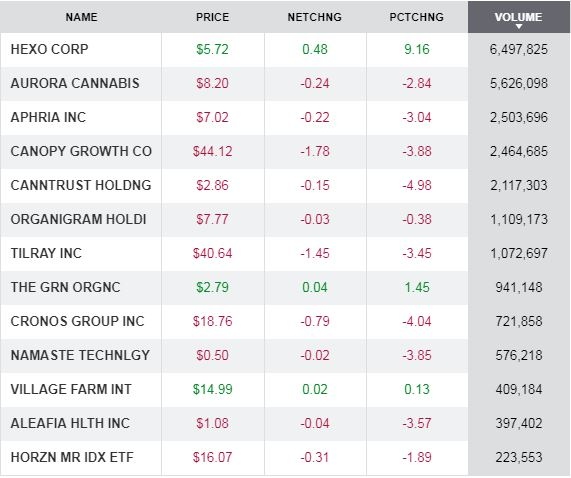