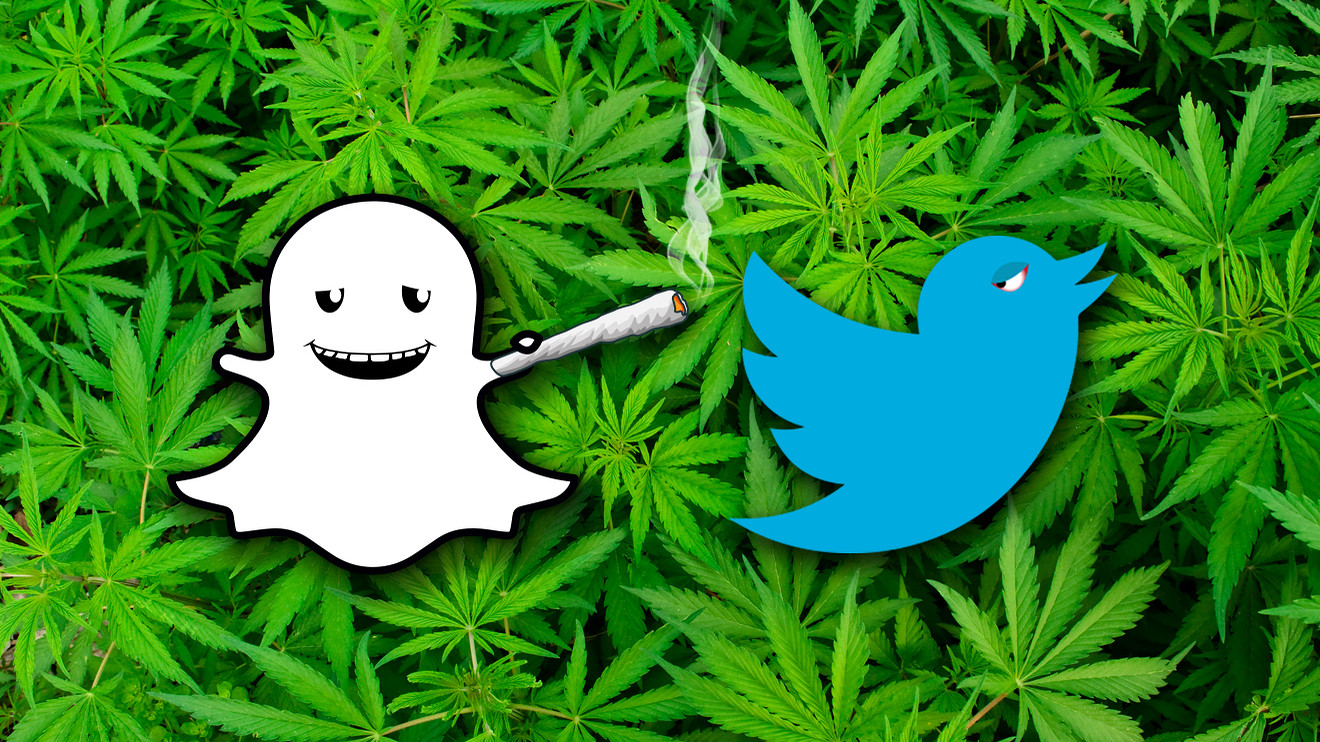 Snap Inc. and Twitter Inc. are gambling that they can profit off the growing marijuana industry by running ads for cannabis products from licensed Canadian producers, testing restrictive laws in Canada on marketing weed.

Regulators in Canada declined to comment on an ongoing investigation into ads Hexo Corp. ran on Snapchat, the app run by Snap Inc. SNAP, -2.57%.

Both Snap and Twitter TWTR, -0.43%  have published ads for some of the largest marijuana companies in Canada such as Aurora Cannabis Inc. ACB, -0.40%  , ACB, -0.61%  and Hexo, who advertise brands, medical pot and other products on the social networks, according to screenshots of ads obtained by MarketWatch. As the Toronto Raptors fought their way to the National Basketball Association championship, Hexo even went as far as sponsoring a Snapchat filter for users at a playoff game in Toronto.

Smaller rivals such as Zenabis Global Inc. ZENA, +7.69% have also been interested in advertising on social platforms. Zenabis was one of the first companies that participated in Twitter’s beta tests for the ad platform, according to Mandeep Khara, Zenabis’ chief marketing officer.

Facebook Inc. FB, +0.95%  and Alphabet Inc. GOOGL, -0.77% GOOG, -0.78%  subsidiary Google do not allow advertisements for recreational drugs, which includes pot, according to the companies’ advertising policies.

“All cannabis and marijuana advertising and keywords are covered by our dangerous products or services policy, even in regions where it is legalized and/or allowed for medical uses,” Google spokeswoman Nicole Bell wrote in an emailed statement. “This policy applies to all Google ads and in our ad network including search, display as well as in-app ads and video ads. There are no current plans to change the policy.”

In an email message to MarketWatch, a Twitter spokesman acknowledged the company would accept cannabis ads and pointed to its policy. The company declined to comment on whether it had banked revenue from pot ad sales.

A Snap spokesman declined to comment on how large of an advertiser base licensed cannabis producers in Canada are, saying only that it allowed pot ads after it became legal Oct. 17.

Via a search conducted with FactSet, MarketWatch was unable to locate examples of executives uttering the words cannabis, marijuana, or cannabidiol in Snap or Twitter’s public transcripts at investor conferences or earnings calls.

Previously: How Facebook decided not to allow marijuana sales on its platform

Cannabis advertising in Canada is tightly regulated and the country’s national health agency placed strict guidelines on the practice following the legalization of recreational pot sales last year. The regulations include outright prohibitions on event sponsorship, use of celebrities and appealing to youth, according to Health Canada documents, among other measures.

Snap executives have testified in the United Kingdom that some elements of its age verification system are imperfect, specifically regarding how users who first sign up for the social network through its app, according to media reports in March. It was not immediately clear the extent to which Twitter suffers from similar issues.

As a result of the age restrictions in Canada and other requirements for ads, cannabis companies and publishers have to come up with creative ways to generate marketing materials or risk running afoul of the law. Under the Cannabis Act both publishers and the pot companies risk punishment if ads fail to adhere to the guidelines.

“Health Canada collects information and facts and considers each situation on a case-by-case basis,” spokesman Eric Morrissette said in an emailed statement regarding a recent promotion by Hexo. “A range of factors including, but not limited to, the purpose of any promotion, its content, its context, and its intended audience would be assessed when enforcing the prohibitions on promotion in the Cannabis Act.”

Quebec-based Hexo HEXO, -4.70% HEXO, -4.72%  has been running ads for cannabis products on Snapchat, the company admitted to MarketWatch on Monday after the ads were first reported by a short seller.

Morrissette did not comment specifically on Hexo’s Snapchat ads, but said that the agency was “aware of the situation and is looking into the matter.”

Hexo director of communications P.M. Rendon wrote in a statement that the company is “scrupulous in adhering to rules and regulations surrounding cannabis promotion, both federally and provincially.” Rendon added that Snap geo-fences the ads so they will only appear in provinces where advertising is legal and the company closely monitors ad campaigns for compliance.

The Snap spokesman pointed out several techniques beyond asking users for their age to ensure the company serves ads appropriately to potential customers targeted by Hexo and other pot companies.

Twitter did not answer questions about its age verification procedures.

Whether Snap and Hexo took sufficient steps to ensure that ads could only be seen by users age 19 and older may be a crucial issue for regulators determining whether either company ran afoul of the law. According to several sources familiar with advertising guidelines produced by Health Canada, the regulations leave details of what promotions are allowed up to interpretation.

“It’s extremely strict, but there is a lot of gray area,” HelloMD director of marketing and business development Megan Henderson said in a phone interview.

Henderson helped develop the advertising guidelines and approved all cannabis ads for Postmedia, a large Canadian publisher, and said both Hexo and Snap could face repercussions if they aren’t in compliance. In Canada, not only cannabis companies themselves, but entities that publish cannabis ads can also be subject to regulatory crackdowns if the promotions break the rules.

Henderson says that because Health Canada has yet to outline the precise practices allowed, it’s unlikely that the agency would subject either company to severe punishment. The strategy Hexo is using is no more aggressive than other large licensed producers such as Canopy Growth Corp. CGC, -0.99% WEED, -0.82%  or Aphria Inc. APHA, +2.06% APHA, +2.71%, she noted.

However, Henderson said that advertising on Snap’s platforms does carry risks because the perception is that Snapchat is heavily skewed toward younger users.

“Snapchat is synonymous with teens and young millennials,” Henderson said. “To use that as a platform — you’re taking a big risk, perception wise.”

The Snap spokesman, who declined to be named or quoted, disputed that characterization, saying anyone with access to the company’s self-serve ad platform can confirm that people 18 and older make up the bulk of its users.