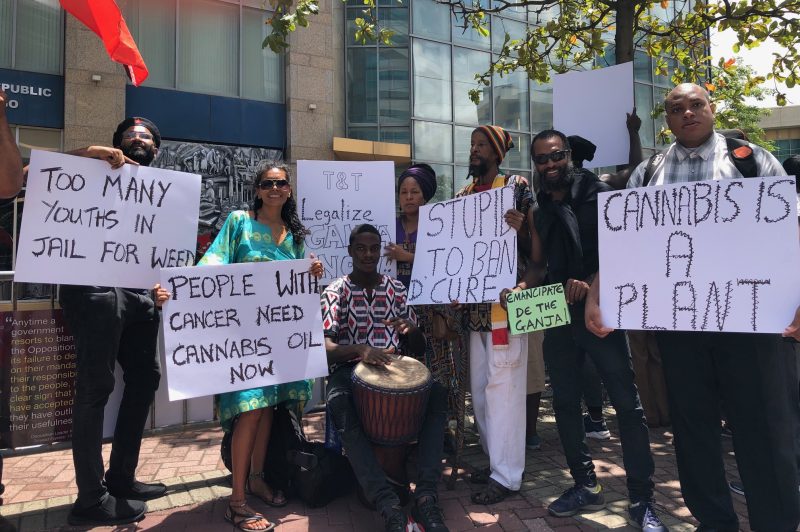 Activist Nazma Muller, second from left, and other supporters of cannabis legalisation, outside Trinidad and Tobago parliament in Port of Spain, July 31, 2019. Photo by Janine Mendes-Franco, used with permission.

Nazma Muller, founder of the Caribbean Collective for Justice and a staunch advocate for the legalisation of marijuana in the region, has long maintained that it’s unconscionable that Trinidad and Tobago’s Ministry of Health has never exercised clauses to amendments made to the Dangerous Drugs Act in 2000, which allows for licenses to grow, import, export, sell and distribute marijuana, and regulates “the use, purchase, sale or possession of any dangerous drugs for medicinal or scientific purposes.”

In 2016, Muller’s group started a petition asking for the government to legalise cannabis. They presented the petition — which has now garnered close to 12,000 signatures — to Prime Minister Dr. Keith Rowley, in 2018. The government later announced that cannabis would be decriminalised as early as June 2019, but that has not yet come to pass.

Such delays prompted Muller to upload a YouTube video asking for citizens’ support at a protest outside the country’s parliament on July 31, 2019. “People who need cannabis,” she explained, “cannot have access to it”:

On the eve of Emancipation, the parliament is being recalled to discuss the Bail Amendment Bill to deal with the crime situation. We cannot deal with crime without dealing with ganja.

Trinidad and Tobago recently saw a spate of murders, one of which was the fatal shooting of an alleged drug dealer.

In her video, Muller called for the repeal of existing restrictions on cannabis which might ease some of the pressure on violent crime. She says “it is time for peace, love and healing to return to Trinidad and Tobago,” and wants to reframe the public debate around cannabis, referring to it as “medicine”.

She said the government is “playing with lives” by dragging their feet on the issue of legalisation. 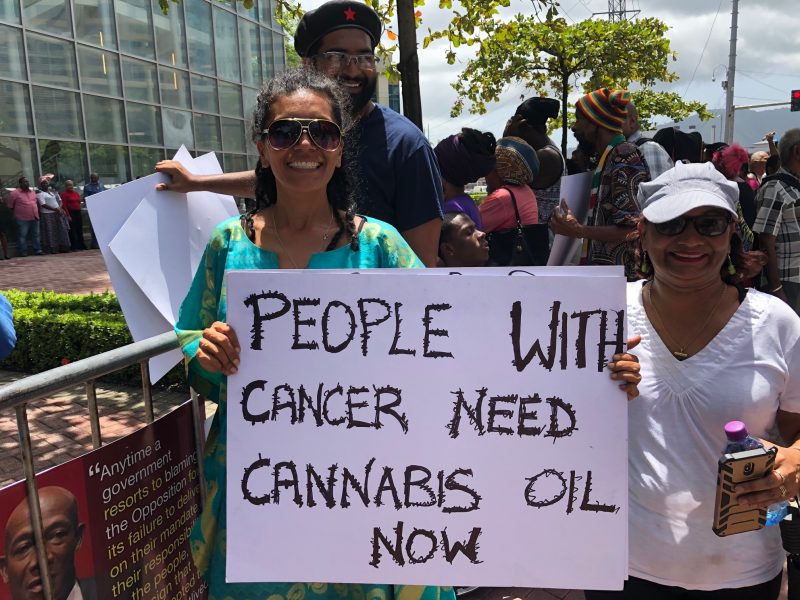 I went to parliament on July 31 to talk to Muller, where she and a modest crowd gathered behind barriers outside the International Waterfront Centre in Port of Spain, the capital. The small group of cannabis law repeal activists stood quietly — between other protest groups with different agendas — their only sound coming from an African drummer who beat out a steady rhythm of resistance on the eve of the Emancipation holiday.

Muller and the group of cannabis supporters held signs and stated their case: “Cannabis is a plant — if they could ban cannabis, they could ban garlic!”

Janine Mendes-Franco (JMF): Why is this important?

Nazma Muller (NM): This is important because there are a lot of people complaining that they have relatives with Stage 3, Stage 4 cancer and everybody has now realised that cannabis oil helps. So, while the government is saying wait until September [for them] to bring the legislation, that means a lot of people are going to die [in the interim] and suffer until this legislation is passed. And then, once it’s passed, to be enforced, to be enacted, to be ratified, takes some time.

So what we’re saying is, the legislation for medical marijuana already exists in Trinidad; we’re asking the MPs [Ministers of Parliament] to bring a motion to enact the legislation.

JMF: Why do you think ministers of health have failed to put it into action — to give people licenses for medical use?

NM: Mr. [Terrence] Deyalsingh and Mr. Fuad Khan […] are still in the parliament and have a right to answer that question, because we asked Mr. Khan to write the regulations when he was health minister and he pretended he didn’t know what we were talking about. We actually have correspondence from the legal adviser to the Ministry of Health that says yes, that is actually correct, that legislation does exist. You can see it; it’s online, so I don’t understand why Mr. Deyalsingh is not writing the regulations and giving people licenses to import oil and to produce oil and to grow ganja. This is a right that people have and […] at this point we are very sure about the science, so we’re saying, please stop delaying and give people a chance to heal.

JMF: You made the link between the Bail Bill — which they’re going to be debating in parliament — and crime, saying the marijuana legislation is an integral part of that.

NM: Yes, because so many institutions are being affected by these laws. The Ministry of National Security, the judiciary, the prison service, the Trinidad and Tobago Police Service … everyone’s resources are being misused to enforce a law [for a practice] that hurts no one, including the person who’s using it, because we’re seeing that it has medical benefits. 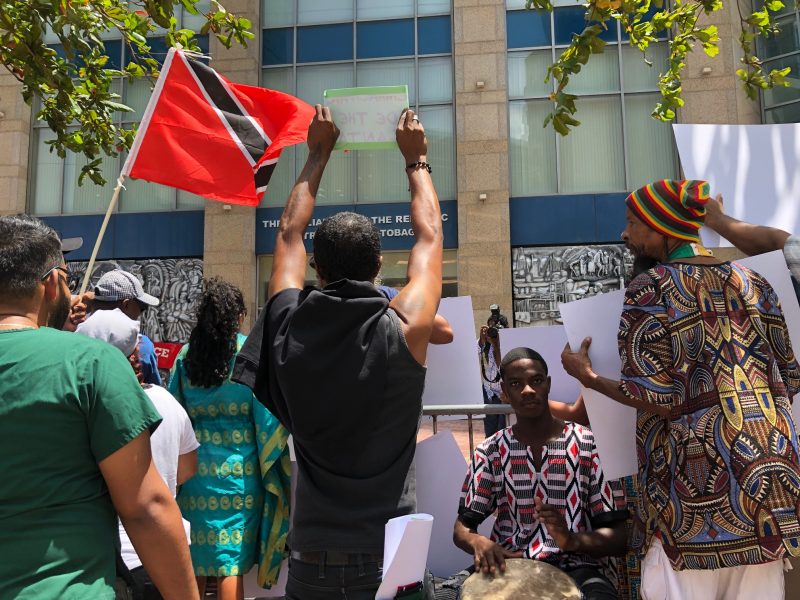 A group of advocates for cannabis legalisation fly the Trinidad and Tobago flag as they petition the country’s parliament on July 31, 2019. Photo by Janine Mendes-Franco, used with permission.

JMF: And why the delay?

NM: I think time was spent trying to find a way to lock down the cultivation so that when licenses are given out, they will be given out to people who they can tax. I think the lockdown will continue. I think the police are going to be used in the future to enforce this new legislation that’s coming to ensure that nobody else but the person who gets the license produces cannabis. I think all this time is being spent to close all the loopholes that would allow traditional farmers, the Rastafari [from producing cannabis]. I was told that’s what the draft legislation contains.

JMF: But you haven’t seen it yet?

NM: No, which is an issue in itself, because we took so long, with so many consultations, trying to find out what it is the people want…you’d think you would show them the draft legislation so that any concerns will be dealt with, and when it comes to parliament it will pass sooner.

JMF: I’d like to compare the situation in Jamaica, where you currently reside, with ours. Jamaica has decriminalised — but not legalised — cannabis, and I know a lot of the smaller farmers are trying to get a seat at the table. Is the process working in the Jamaican context, or is it still exclusionary?

NM: The Jamaican government has said they’re bringing something called the Alternative Development Programme for traditional and Rastafarian farmers, but that, to me, is not working either, because you’re still trying to control what is produced and they’re putting regulations in place that are prohibitive. It’s too expensive: They want walls, fences, barbed wire, security cameras — and this is also what Trinidad and Tobago is famous for — finding ways to make things exclusive. We call it “all-inclusive”, but it’s actually exclusive — to keep certain people out and keep the profits within a certain sector. It has not worked for Jamaica, in the sense that certain people are making a lot of money, they have the licenses [but] I’m not seeing a lot of jobs being created. I’m still seeing the small man hustling to sell a 50-bag, a 100-bag in Jamaica — and still at risk of being prosecuted for selling.

In Trinidad, we have to take into consideration what is happening all over the world and apply it to our situation: We are on the shoulder of South America; we are a trans-shipment point, so we need to deal with the fact that it’s so easy to get Venezuelan and Colombian kush into Trinidad. And what it is doing is draining our foreign exchange [so] what we’re concerned about is the cultivation, that it remains local, [that we] create employment, and that local people benefit.

JMF: So what’s the next step?

NM: I have a meeting with [Attorney General] Faris Al-Rawi on Friday [August 2]. He had called me and asked me to come to have a meeting with him so he could show me what the problem is and why this is taking so long, but I would like to speak to him about licenses for people. A lot of people have contacted me about the oil, so that is my next step. That’s our focus: to keep the pressure on to save lives, whatever it takes.

In a Trinidad and Tobago Newsday report on August 2, the attorney general said that the draft legislation will go to the legislative review committee today, with the hope that Cabinet will consider it next week. He said they must carefully work out details related to expunging convictions of those jailed for marijuana use. Saying that Muller had a right to advocate under Trinidad and Tobago’s Constitution, Al-Rawi added that “this was not simply a case of demanding a law be passed and it is passed”.

Legalisation may be one thing, but the law relating specifically to the medical use of cannabis has already been passed. Muller is asking that they use it.