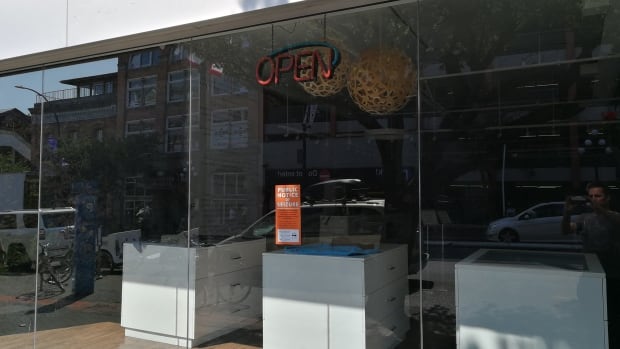 Trees Cannabis closed all its Victoria outlets after the stock in its flagship store on Yates Street was seized by provincial Community Safety Unit officers Thursday Aug. 1. (Trees Cannabis)

British Columbia’s solicitor general says the government is stepping up enforcement against cannabis retailers which lack provincial approval, following raids this week on four stores in Kamloops and Victoria.

Farnworth issued the statement after officers from the province’s Community Safety Unit, a unit created to enforce cannabis laws, seized all cannabis products from two Victoria stores operated by Trees Cannabis on Wednesday and Thursday.

„Illegal retailers that do not obtain a provincial licence will have to close,” the statement said. „And as more legal retail stores open across the province, you can expect to see increasing enforcement action.”

After officers seized products on Wednesday from the Trees store on Alpha Street, company CEO Alex Robb said the company would shut its four other Victoria outlets and two in Nanaimo on August 16.

In the meantime, Robb invited anyone aged 19 or over to visit those stores and sign letters of support for a provincial non-medical cannabis retail licence.

But following the second seizure at the downtown store Thursday, Robb announced all Victoria stores would close immediately until provincial licensing was obtained, followed by the Nanaimo stores on Monday.

Robb noted that Trees Cannabis began its application for a licence 12 months ago but delays in processing applications have allowed only a few Victoria stores to receive approval so far.

With the closing of the five Trees outlets in Victoria, Robb said 92 people will be laid off, along with 50 more in Nanaimo.

With files from CBC Radio Daybreak Kamloops and All Points West