CannTrust Holdings’ independent auditor KPMG has withdrawn year-end and interim reports on the pot company’s financial statements. The embattled company said Friday that KPMG’s decision was prompted by “newly uncovered information” shared by CannTrust’s special committee of directors, which was formed after a regulatory breach was disclosed in July. While CannTrust did not provide specific details, the firm said it included information that led to its July 25 management shakeup that included the ouster of its CEO and chairman.

Toronto-based 48North Cannabis has made its foray into the recreational market after delivering its first shipment to the Ontario Cannabis Store on Friday. The company has committed to supplying 5,000 kilograms of cannabis to retailers in Ontario, Alberta and Quebec by the end of 2019. Co-CEO Alison Gordon said in a release that 48North is “well-prepared to deliver on all of its supply agreements.”

Delta 9 Cannabis is graduating from the Toronto Venture Exchange. The Winnipeg-based cannabis company announced late Thursday it has received conditional approval to list on the TSX. CEO John Arbuthnot says the “major milestone” will help Delta 9 increase trading liquidity and raise capital for further investments. The date of the company’s trading debut has not yet been confirmed as it still needs to meet final requirements by a Nov. 5 deadline.

Some U.S. farmers opt for hemp over soybeans as trade war rages

To soften the blow from the vast decline in agricultural exports to China, some American farmers are shifting production from traditional cash crops to hemp, a more lucrative and less export-dependent commodity. That’s according to a Bloomberg News report citing John Boyd Jr., a soy farmer in Virginia and the founder of the National Black Farmers Association. Hemp is prized for its concentration of cannabidiol, or CBD, a non-psychoactive ingredient that’s become ubiquitous as the wellness trend sweeps the U.S.

$6.98 per gram
— The price of a gram of cannabis in Canada, down 4.3 per cent from the prior week, according to the Cannabis Benchmark’s Canada Cannabis Spot Index. 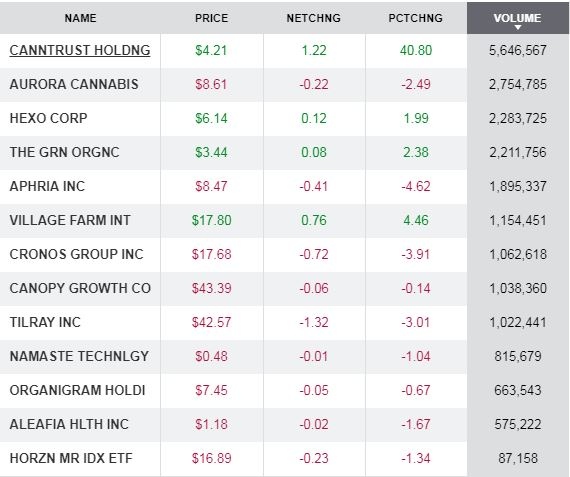