The multi-billion-dollar cannabis industry in the U.S. is largely restricted to cash-only transactions. Will Congress or technology companies be the first to provide a solution for this growing industry?

I was attending the closing party for the Green Market Summit in Chicago, when a colleague handed me a translucent tube that looked like the hybrid between a flux capacitor and a graduated cylinder from high school chem class. It was a cannabis concentrate dabbing device—the kind you press a button, take a hit, and strong cannabis vapors flow through you.

That’s what happens at events like these when you’re with the adventurous crowd, the ones who do more than just talk about cannabis.

As an expert dabber who uses cyclical breathing techniques, I eagerly took a hit from the device and exhaled a mass of cloudy vapor that nearly set off fire alarms. The experience was delightful. Not for the faint of heart, but exciting for those with an appreciation for vaporizer technology innovation and a healthy hit of weed. And it just so happened, a big burly, redhead fellow standing next to me shared my appreciation.

I tossed this „Space Rocket” as it’s called, over to him like the final relay of a baton. He fearlessly grabbed it, flipped the switch, and masterfully demonstrated the most impressive dab hit I’d ever seen. As if it were an unspoken competition, I stood in awe and humbly offered up a declaration of defeat.

He extended his hand and asked, „Do you want to hear about the cannabis banking solution that’s going to solve our banking problems?”

The Problem With Cannabis Banking

The man who out-dabbed me was Ryan Lewandowski, the Director of Outside Sales at CannaTrac, a software that provides qualified companies with a cashless system that allows for “full traceability” for consumers, retail merchants, and financial institutions while “satisfying their regulatory requirements that benefit all” parties in a cannabis transaction. CannaTrac provides a unique solution for a problem that affects nearly every company in the cannabis industry: relying on cash transactions.

I’m getting a head of myself here. Before we talk about how we arrived at a place where a solution like the one CannaTrac is offering is necessary, you need to understand how we got to this point.

You may have heard that the cannabis industry is exploding into $66.3 billion dollar global industry over the next six years, but what these headlines tend to leave out is that it is turning into a $66.3 billion cash industry. And that’s a monumental problem for such a highly regulated industry.

In spite of the majority of states in the U.S. legalizing some form of marijuana sales, the federal ban on marijuana means banking—itself a federally-regulated industry itself—is unwilling to run afoul of federal laws when it conflicts with state laws. Even when the federal government rescheduled hemp, marijuana’s less-psychoactive cousin, to allow for industrial farming and commerce, they conspicuously left banking out of the bill.

Since most people (and start-up cannabis companies) don’t have millions or billions worth in cash to finance the growth of the industry, the oversight on the part of the federal government to not create strong regulations for cannabis banking are hampering the industry. The American Bankers Association in a letter to U.S. financial agencies took them to task for leaving the banks—and the hemp industry—in limbo.

“Banks want to serve their communities and support their local economies,” the ABA’s letter read, “but need clear, unequivocal assurance from their regulators that hemp is distinguishable from cannabis, and that serving the industry will not expose them to criminal and civil liability, or regulatory censure.”

Though the hemp industry is still unclear on its financial future, it’s path forward seems much more obvious than the medicinal and recreational marijuana industry. For the marijuana industry, the cash-only way of life creates a deluge of problems. As The Economist noted last year, cash-only cannabis businesses run into security problems (safeguarding and transporting all that cash), entrepreneurial and consumer limitations for those who rely on credit, and general inefficiencies. Computer software is much better at balancing books than people hand-counting thousands of dollars in cash every day. Plus, cash transactions encourage unscrupulous business practices like underreporting taxes.

Nevertheless, marijuana businesses, from dispensaries to producers to logistics, find themselves forced to work without bank accounts, credit card payments, and the security of electronic transactions. This runs counter to the regulatory needs of the industry, which places premium importance on the ability to track-and-trace every movement of cannabis products, from cultivation to sale. Banking would provide a much more accurate record of a cannabis companies’ finances for authorities to monitor and audit. And, despite the risk of running afoul of federal laws, the finance industry is slowly forging ahead anyway. 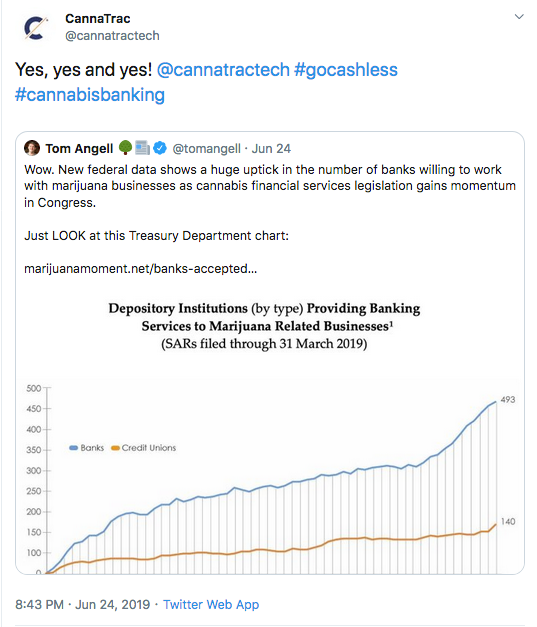 At this point, federally-sanctioned cannabis banking will take an act of Congress—or perhaps an act of God. If certain members of the U.S. Congress, have their way, that act will happen sooner than later. The Secure and Fair Enforcement (SAFE) Banking Act was introduced in 2017 by pro-cannabis, Oregon Senator Jeff Merkley, with the express intent to clear the regulatory hurdles that prevent federally-insured banks from working with cannabis companies.

Though it has been a slow road, the SAFE Banking Act picked up more steam in late July, with a hearing in the Senate Banking, Housing and Urban Affairs Committee led by Senator Mike Crapo (R-ID). Crapo is an example of growing bi-partisan support for the bill, even among senators who don’t support legalizing cannabis itself. While the senator remains opposed to any form of marijuana legalization, he’s open to the banking issue even if it is a derivative of the SAFE Banking Act, and not necessarily the existing bill.

“Senator Crapo’s willingness to hold a hearing recently on the SAFE Banking Act was very encouraging,” Michael Correia, director of government relations for the National Cannabis Industry Association, told Marijuana Moment. “We’re thrilled to learn that he is open to solving this important issue and we are looking forward to working with the senator,” he added.

In the interim, some have pointed to cryptocurrencies as a basis to introduce a bill to allow taxes to be collected in stablecoin, a more stable (see what they did there?) cryptocurrency pegged to real world assets. While cryptocurrencies would add a missing layer of security and transparency, the high bar for understanding the technology and lack of adoption among consumers make it a farfetched savior for now.

That’s where technological solutions like CannaTrac come in to play. I was so struck by my interaction with Lewandowski, that I reached out to Thomas E. Gavin IV, the company’s CEO to learn more about the company and what’s happening with cannabis banking.

Gavin, who prior in his career spent nearly two decades in residential and commercial real estate finance, worked his way up from a marketing consultant with the company. His life experiences laid the foundation for his role tackling the challenging, highly-regulated cannabis industry’s financial woes. But, as he discovered, even the stringent paperwork involved in mortgages pales in comparison to the due diligence paperwork required for a cannabis business.

CannaTrac works with many cannabis companies, but they’re not a growth-at-all-costs company. They’ve built their reputation as a viable solution to the cannabis cash crisis by carefully vetting each of their clients. “Prior to any of these clients even coming on our system,” Gavin told me, “we do a very elaborate know-your-customer background check to make sure we’re not basically bringing criminals onto our platform.”

Historically speaking, there have been banks that have done business with cannabis companies, especially the ancillary players like Canna-Trac. But banks are closing those avenues and increasing their due-diligence processes. “When [CannaTrac] opened our first bank accounts, it wasn’t as difficult as the second bank account. I have two full drawers in my office dedicated to that application. Banks are taking due diligence to a whole other level to prepare themselves for when everything goes legal.”

Gavin sees banking reform for the industry in the future, but not right away despite the SAFE Banking Act making progress. The ultimate solution, according to Gavin, is that marijuana should be declassified, which would not only clear up the banking issues, but a lot more issues stifling the industry.

For now, smaller steps will take us towards cannabis banking reform, and in most cases, cannabis-legal states are trying to take the lead. The California Senate passed legislation to create state-chartered cannabis banks, which could circumvent the federal restrictions on the industry on a state-by-state basis and provide a working model for federal legislation. Midwestern states like Illinois and Colorado, which feature some of the most progressive cannabis laws, may be central to the cannabis banking reform movement. “The SAFE Banking Act,” according to Gavin, “would give us a lot more freedom than we have now. Banks would be more comfortable to work with the cannabis industry.”

When that day comes, CannaTrac will be well-positioned, since they already provide a cashless payment system for the cannabis industry that meats HIPAA-compliance and allows for full transparency into every transaction, so both banks and retailers can confidently track and audit every dollar and every sale.