On a misty morning Saturday in San Francisco’s Golden Gate park, Janna Lutz sat sheltered in a grove of Monterey pine and eucalypus trees carving a bong from an eggplant.

Lutz, 65, was on the West Coast visiting her son, Brian Lutz, 24, a software developer in San Jose. He’d brought his mother, an interior designer and former city council member in Chagrin Falls, Ohio, to Outside Lands, the Northern California music festival that draws around 200,000 people over its three-day run.

They were taking part in a milestone moment, one that attendees called “historic” and “cool” and that the elder Lutz called “a long time coming” — the largest event in California, and the country, to allow legal sales and consumption of cannabis. It is a preview of what may eventually become commonplace for other big gatherings such Southern California’s Coachella Valley Music and Arts Festival (though no such permit has yet been requested) as marijuana rules solidify.

On this second day of the festival, the Lutzes were checking out Grass Lands, a cordoned off, 21-and-over area where about two dozen vendors were, for the first time, hawking joints, infused chocolates, THC-laden nonalcoholic beers and more.

Grass Lands is a test case for California regulators trying to create boundaries for the expanding marijuana industry. For marijuana brands, it was a chance to woo new customers as cannabis morphs into an everyday commodity.

The Lutzes had purchased a pre-rolled joint earlier, but decided before partaking they would compete in a contest to create the best smoking device from vegetables. The winners would be chosen at 4:20 that afternoon.

“We’re saving ourselves because if we smoke right now the bong is going to look like sh–,” said the younger Lutz. “So we’re going to wait until we finish more of it.” 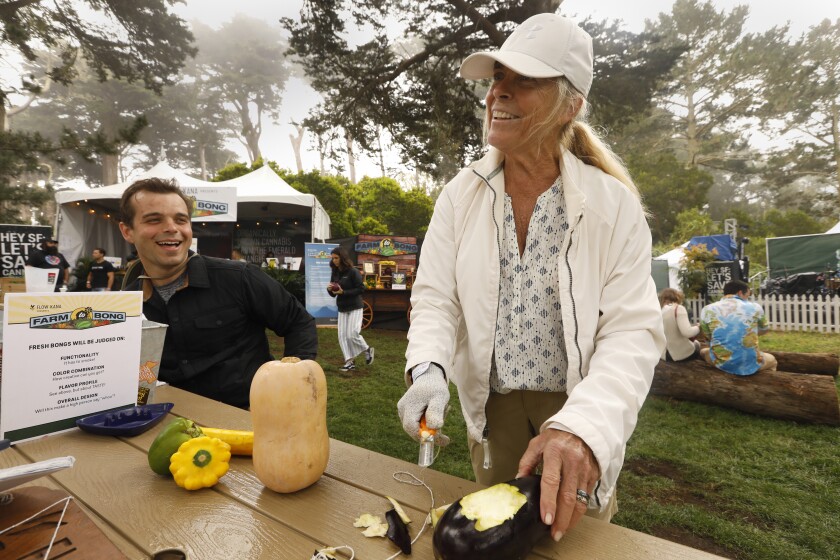 Janna Lutz, 65, of Ohio, and her son Brian Lutz, 24, of San Jose, make a bong out of vegetables for a farm to bong contest at Grass Lands at the 2019 Outside Lands festival in San Francisco. (Carolyn Cole/Los Angeles Times)

Their restraint made them a minority in Grass Lands, where enthusiastic crowds filled “consumption areas” on raised platforms, posing for selfies, painting on a communal mural and exhaling thick billows of smoke to add to the light fog lingering into the afternoon.

Though cannabis has been legal in California since voters approved its recreational sale and use in 2016, it remains illegal to consume it in public or sell it outside of licensed dispensaries without a special event permit from both state and local authorities. While more than a dozen such licenses have been issued for mostly cannabis-centric events across California, Outside Lands broke new ground through size and scope, and because alcohol was sold widely at the event, a mix state lawmakers have placed strict rules on.

“It’s kind of surreal,” said Kaydee Perreira, 29, as she passed out squares of white chocolate mixed with matcha tea, a non-laced sample of candy bars sold by Nug, a dispensary with locations in Sacramento and Oakland. “I think this is a good start for what’s going to happen in the years to come.”

Retailers and sponsors at Grass Lands saw the event as an opportunity for branding as much as profits.

The largest-growing market shares for cannabis products are among those seeking something more refined that a quick high, said Sheena Shiravi, spokesperson for cannabis-delivery company Eaze, which sponsored the festival and a lounge inside of Grass Lands. “Parents, soccer moms, women and baby boomers” are target demographics for her company, she said, instead of the stereotype of the “couch-locked videogamer.”

“There is a huge push for wellness, to make consumers understand this isn’t just a recreational drug,” Shiravi said. “What Eaze is trying to do and what the state is trying to do is create something that is sustainable to combat the illegal market. By Outside Lands doing this, it is a huge moment in history.” 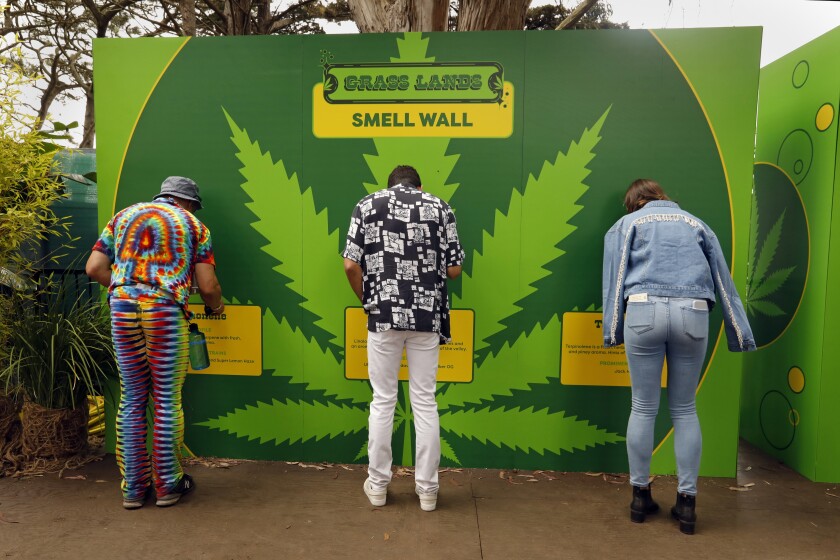 The smell wall allowed visitors to pump puffs of scent from canisters filled with different terpenes, the oils that give cannabis its odor. Thousands came to Grass Lands to buy and sample a variety of pot products for the first time at the Outside Lands festival. (Carolyn Cole/Los Angeles Times)

That high-end, high-concept aesthetic permeated the scene as much as the smoke. The green tea in Nug’s bars? Ceremonial grade, imported from Japan.

“It reminds me of like sommeliers,” said Caleb Lee, 22, a geography student at UC Berkeley. Lee was standing in front of the “smell wall,” a display that allowed passersby to pump puffs of scent from metal canisters filled with different terpenes, the oils that give cannabis its odor.

Similar to recognizing the flavors in wine, cannabis companies hope to educate users on the nuances between the aromas, the herbal character of alpha-pinene, for example, compared to the earthy tones of myrcene — two common terpenes Outside Lands consumers were sniffing.

“It’s like a whole industry now,” said Lee. “The smell, the quality, the origin.”

Though Grass Lands offered the same polished authenticity of the rest of the festival, it came together at the last minute.

The license to sell cannabis at the festival is part of a pilot program authorized by the San Francisco Board of Supervisors earlier this year that made it possible for seven large events in the city to apply. Started in 2008, Outside Lands has grown over the years to become one of the nation’s largest music festivals, in the same league at Coachella and Lollapalooza in Chicago. The name refers to the fact that Golden Gate Park once belonged to Mexico, which transferred it to the United States by signing the 1848 Treaty of Guadalupe Hidalgo.

Events previously known for illegal cannabis consumption were targeted for the pilot permits, with the idea that legal sales could help regulate behavior that was already taking place. State leaders said California, by issuing a permit with restrictions, is simply regulating the use of a drug that has been ubiquitous at rock concerts since before Woodstock, which took place 50 years ago this week.

“Let’s be clear — this is not the first time in history that cannabis will be consumed at a music festival,” said Assemblyman David Chiu (D-San Francisco). 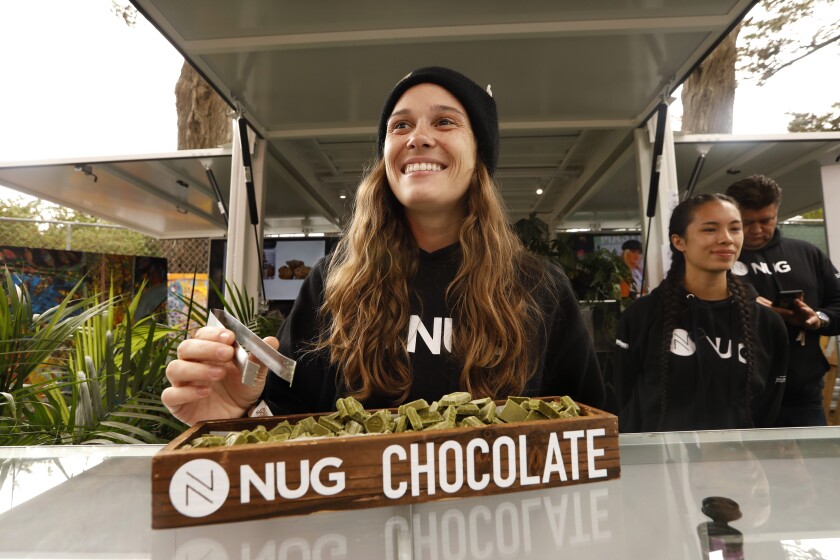 Kaydee Perreira at Grass Lands hands out non-laced squares of white chocolate mixed with matcha tea, a non-laced sample of candy bars sold by Nug, a dispensary with locations in Sacramento and Oakland.

The pilot program runs only through the end of the year, putting pressure on the city to approve a test case before it expires. Other events in the pilot, including the cannabis-centric 4/20 at Hippie Hill in April and the Pride celebration in June, have already passed, narrowing the options further.

“We are running out of months, so we have to do this,” said Marisa Rodriguez, a former prosecutor who took over as head of San Francisco’s cannabis office four months ago.

Though Outside Lands organizers applied for a state permit months ago, the city didn’t finalize its application until Tuesday at 5 p.m., about 67 hours before the festival started, due to ongoing changes to address concerns.

Rodriguez said their rules went though eight rounds of revisions to “make sure the community feels heard.”

“It has never been done before,” Rodriguez said. “We are really trying to be mindful and thoughtful and serious about how we are controlling this process.”

Those rules were still being tweaked as the weekend progressed. Hours before opening, regulators requested more fencing to block views of the consumption area, and the removal of large pot plants.

Employees were asked not to wear their festival ID badges while smoking. Later, the wireless connection kept failing, forcing some sales to be recorded by hand to meet the strict state guidelines for documenting every step of the production and sale process — but making it harder to enforce purchasing limits.

But both regulators and sellers said they were worked to make the weekend a success, and by Sunday morning, Rodriguez said there had been no security or medical issues associated with the cannabis sales. Grass Lands is part of a pilot program in San Francisco, but the approach has its critics who contend such areas will encourage people to legally light up and then later drive while impaired.

“We are all learning together,” said Abel Charrow with Kiva Confections, whose pineapple habanero and wild berry gummies were drawing long lines at $5 for a package of two. “We all want to be able to represent to everyone that … we are above board.”

Outside Lands may also offer lessons in what the state and the legal industry can’t control. Even as marijuana’s presence is rapidly mainstreamed, cannabis has also remained a robust source of illegal activity through public use and black market sales.

During the first six months of this year, state authorities served 19 search warrants on unlicensed sellers, confiscating more than 2,500 pounds of illegal marijuana products with a retail value of $16.5 million, according to data released last month. The state has also seized $219,874 in cash from illegal pot shops.

Some California law enforcement leaders say the Outside Lands experiment will only encourage more people to abuse weed.

“We certainly have concerns when you have that many people at an event ingesting cannabis or alcohol or anything that will cause someone impairment, particularly with people driving, said Ronald Lawrence, president of the California Police Chiefs Assn.

Away from Grass Lands in the acres of Outside Lands stages and fields, it was easy to spot illegal marijuana use — and sales. Though police presence was heavy, with SWAT team members openly patrolling for the first time in the wake of mass shootings in Gilroy, El Paso and Dayton, enforcement of cannabis laws seemed thin.

Sitting on a sunny hillside watching folk rockers Caamp on Saturday afternoon, Dan and Helsi Robino were smoking a joint of the potent Gorilla Glue strain. Dan Robino said they purchased it legally outside the festival and sneaked it in because it was cheaper. Helsi Robino, a project manager who lives in Oakland, said she doubted they would visit Grass Lands because it was out of the way and she worried the crowd would be “amateur hour.”

“I feel like the people who buy it here … they probably only smoke at festivals so they don’t know what they are doing,” she said. 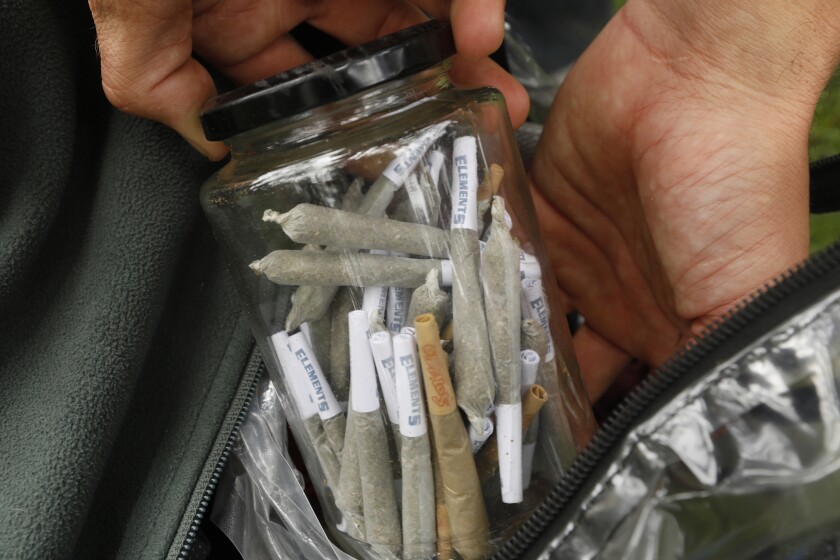 Despite legal sales going on in the Grass Lands area, there were were some illegal sales happening at Outside Lands.

Closer to the main stage, Zoldt, who asked that his last name not be used because he was illegally selling joints out of a glass jar, said the legal trade hadn’t affected his business.

This is the second year the 25-year-old has sold pre-rolled joints at the festival, made from what he describes as an “old-school” sativa strain called schrom, and he thinks he will make enough to fund up to two semesters at San Francisco State University where he studies political science.

Mostly, he said, people told him they were buying from him because they didn’t like the Grass Lands prices. Like many items at the festival, where beers are $13 and a glass of champagne can run to $24, cannabis can cost a premium.

“It almost seems easier just because I can be like, ‘Well, this is an actual average price, like this is what you would normally pay somewhere else as opposed to like Outside Lands prices,’” Zoldt said. “At the end of it, it’s mostly capitalism.”