The chief executive officer of Supreme Cannabis says that CannTrust Holdings’ ongoing regulatory scandal is shifting how investors view pot companies. “It’s going to separate good operators from the rest of the pack, because now you’re getting a lot of attention,” Supreme CEO Navdeep Dhaliwal told BNN Bloomberg Tuesday. “People are really looking at the operation, looking at profitability; are you really running a good business?” Dhaliwal added that Supreme – which anticipates an approximate 97 per cent quarter-over-quarter and a 449 per cent year-over-year revenue jump in its fiscal fourth quarter – is well-situated to capitalize on that shift. “It’s not just about hype anymore,” he said.

If you were wondering what caused some of the wild swings in pot stocks in the final minutes of trading last week, you may want to look closely at the biggest cannabis exchange-traded fund. According to Bloomberg News, the US$1 billion ETFMG Alternative Harvest ETF recently scooped up about 5.5 million shares of CannTrust. On Friday, shares in the Vaughan, Ont-based producer had jumped about 40 per cent in the last hour of trading on Friday, despite spending most of the day in the red. Meanwhile, the ETF has significantly cut positions in Auxly Cannabis, Vivo Cannabis, Supreme Cannabis and Canopy Rivers – which all fell by at least 13 per cent that day.

SOL Global Investments will hold a meeting in October at which shareholders will be asked to approve a change in the company name to Bluma Wellness, according to a release. SOL shareholders will also be asked to vote on the company’s proposed change of business from a pot investment firm, to that of a U.S. multi-state cannabis operator. SOL, which is listed on the Canadian Securities Exchange, was highlighted in a short-seller report late last year alleging that it sold Latin American assets at inflated prices to Leamington, Ont.-based producer Aphria.

Shares of Village Farms International climbed Tuesday after the pot company reported that its joint venture Pure Sunfarms’ quarterly net income increased 226 per cent to $37.2 million from the previous quarter. This marks the third consecutive quarter of profitability for Pure Sunfarms, Village Farms said. – The cannabis JV – which is shared with Emerald Health Therapeutics – achieved a full run-rate of 75,000 kilograms of cannabis at its Delta, B.C. greenhouse in the second quarter, the Vancouver-based company said.

$94.6 million
— The amount of private cannabis retail sales in Canada this July, up 20 per cent from June, according to Cova Software, which provides point-of-sale services for North American cannabis retailers. These sales estimates are based on 306 private Canadian cannabis stores operating in July. The data does not include government-run cannabis stores. 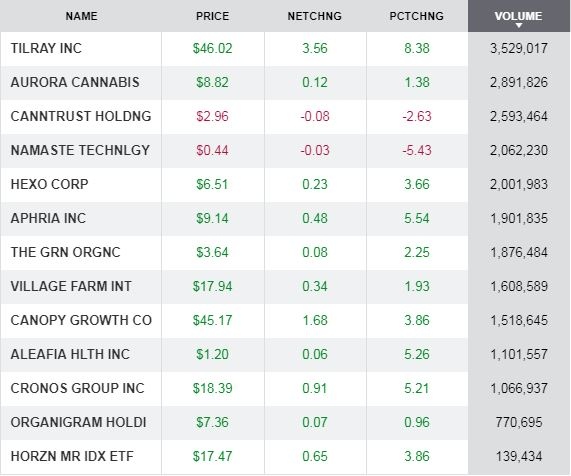