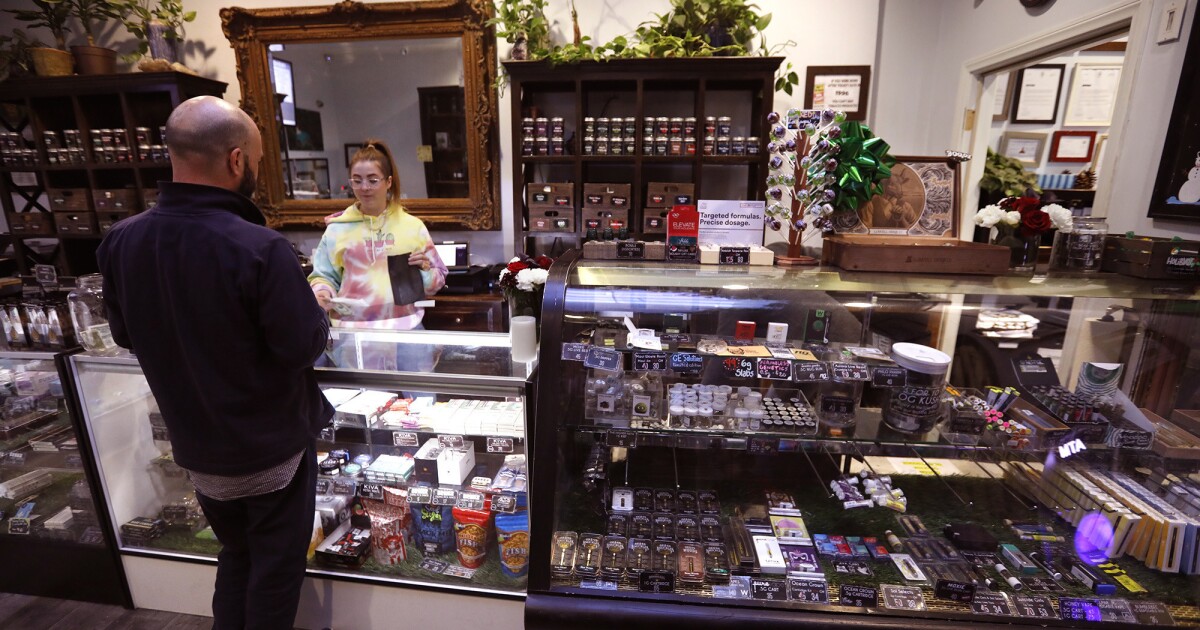 California is on track to post a record $3.1 billion in licensed cannabis sales this year, solidifying its status as the largest legal marijuana market in the world, according to a study released Thursday by financial analysts who advise the industry.

Legal sales are up significantly from an approximate $2.5 billion in 2018, the first year of licensed cannabis sales in California, according to the analysis by sales-tracking firms Arcview Market Research and BDS Analytics. After a rocky start in 2018, retailers that have survived California’s tough licensing, testing and packaging regulations are “battle hardened” and stronger because of an influx of investment that has allowed them to take advantage of the state’s large population and pent-up demand for legal products, said Tom Adams, managing director and principal analyst for BDS Analytics.

“Any market in the world would be ecstatic about a 23% growth rate,” Adams said. “That is fabulous for any industry to have that kind of growth.’’

But California’s black market for marijuana continues to flourish as high taxes and a refusal by most cities to allow licensed shops makes it cheaper and easier for people to buy from illicit dealers, he said. An estimated $8.7 billion is expected to be spent in the illegal cannabis market in 2019 — more than double the amount of legal sales.

The size of the black market continues to trouble many supporters of Proposition 64, the statewide initiative approved by voters in 2016 that legalized growing and selling cannabis for recreational use.

“The illegal market is competitive because legal marijuana is so expensive to produce under Prop. 64,” said Dale Gieringer, director of Cal NORML, which supported the initiative though it preferred other regulations.

Tamar Todd, an attorney who lectures on cannabis law at UC Davis and UC Berkeley and is vice chairwoman of a state advisory panel on marijuana, said the growth of the legal market and the continued existence of a large illicit market is not a surprise.

More than 20 years after California became the first state to legalize the sale of medical marijuana, it will take years more to move many longtime growers and sellers into a complicated licensing system, she said.

“I personally take a really long view of the transition toward legalization, especially in California that had a really large illicit and quasi-legal market under medical [marijuana law] for 20 years that operated without state oversight and state enforcement,” Todd said.

California remains easily the biggest government-sanctioned market in the nation, topping the $1.6 billion in legal sales projected this year for Colorado, which legalized cannabis in 2014. Legal pot sellers here are expected to sell nearly triple the $1.1 billion in legal cannabis that will be sold this year in Canada, which began allowing pot shops in October.

Adams said California’s legal market this year is also larger than those in Germany, which he projected to reach $240 million this year, and the Netherlands, which he expects will have smaller sales.

The first year of licensed cannabis sales in California saw spending drop from $3 billion to $2.5 billion because many medical marijuana shops closed once licensing began or kept operating outside the legal market. There are currently 583 licensed pot shops in California and 263 licensed home-delivery firms.

The climb back this year is happening “despite these huge levels of taxation and regulatory woes that we think add 77% to the cost of a gram in the legal market versus what it costs on the open market,” Adams said.

Jerred Kiloh’s Sherman Oaks store, the Higher Path, has seen sales hold steady after spiking in the first months after legalization. He said many licensed stores in the San Fernando Valley have seen an uptick in sales because of the city’s enforcement against illegal operators in the area.

But he is skeptical of the $3.1-billion projection because many other pot shops have seen sales declines in the last year as they struggle with a competitive disadvantage against the illegal market.

“If you look at Los Angeles, it’s 10 to 1 when it comes to illegal operators versus legal ones,” said Kiloh, who is president of the United Cannabis Business Assn.

Contributing to the size of the illicit market, industry officials say, some 76% of cities and 69% of counties have banned cannabis stores. Proposition 64 gave local governments the power to prohibit legal marijuana sales in their jurisdictions.

The local control provision of the initiative “requires by design that there is going to be a very long transition period because it’s saying there are communities in California that are going to wait and see and are going to opt to keep an illicit market,” Todd said.

As more states allow cannabis and the federal government changes laws, more cities may decide that it is better to license pot shops than have home deliveries they can’t control come from outside their jurisdictions.

If federal and state law change to allow California cannabis to be legally exported out of the state, that also could reduce the illicit market, Todd said.

The release of the report coincides with the return of the California Legislature for its last two months of work for 2019, and is likely to add urgency to the debate on a cluster of bills aimed at bolstering the legal market and reducing illegal sales.

Lawmakers have shelved a measure that would have cut the state excise tax on cannabis sales from 15% to 11% for three years, but bills still under consideration would fine websites that advertise unlicensed pot dealers and create a state-sanctioned bank for use by cannabis firms.

Assemblyman Phil Ting (D-San Francisco) was unable to get the votes needed for a bill that would have required cities to allow pot shops if their voters supported Proposition 64. But he noted enforcement is stepping up.

“California’s cities and counties need our support to go after the illicit cannabis market,” Ting said. “At the same time, local governments need to do their part and help bring legal cannabis businesses to light, so they can thrive and pay taxes that help fund public services.”

Without changes to make it easier for illegal pot sellers to get licenses and compete, the illicit market will continue to be a significant part of cannabis sales in California, according to the report released Thursday.

Adams’ Colorado-based firm projects legal cannabis sales in California will grow to $7.2 billion in 2024, but illegal sales will still be $6.4 billion that year. More cities are expected to allow pot shops, and state efforts to get illegal operators licensed, in part through tougher enforcement, will help with the shift, officials say.

“Unless the state acts to lower the taxes and lower the regulatory load, they are making the illicit market participants happy campers by keeping them in business,” Adams said.