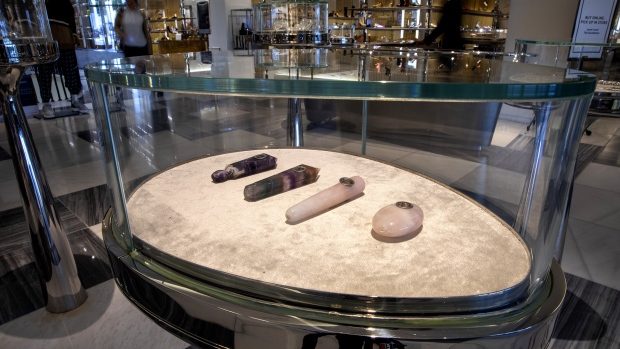 (Bloomberg Businessweek) — In July, to commemorate their first anniversary, a Colorado couple in their 30s wanted a treat that would help them extend the high of their special day: custom gold-foil-tipped marijuana cigars.

They went to Made in Xiaolin for a US$1,200 set of “cannagars,” made with premium flower and bearing the wedding date stamped on the rolling paper. “We compare it to popping bottles,” says Christopher Louie, the founder of the company 30 miles southwest of Denver. He has aims on Aspen’s party scene next.

Four-figure blunts are but one part of a burgeoning market for personalized, high-end cannabis products, especially on the West Coast, where growers often have a glut and are trying to find new ways to market their harvest. Oregon and California, two states with a long history of cultivation, have experienced oversupply since marijuana was legalized. (Interstate commerce is federally prohibited, and Oregon produces more legal weed than its residents can consume, while California still has a robust black market on top of its new legal industry.)

Legal cannabis sales were north of US$10 billion last year in the U.S. and are forecast to grow to US$30 billion in 2024, according to BDS Analytics. Eleven states plus Washington, D.C., authorize recreational use, while 24 more allow some form of medical marijuana. Almost 80 per cent of Americans live in a state with some kind of access.

As marijuana loses some of its historical stigma, and pushes into the mainstream, it’s getting a luxury makeover. Aesthetics has been “a big point of differentiation between us and anyone else on the shelf,” says Brett Heyman, founder and creative director of luxury handbag label Edie Parker. She introduced her own strains of marijuana in stylish, gold-capped jars as well as smoking accessories in May. “The vibe [of other cannabis brands] is very much old-timey apothecary, or medical, or stonery—none of those things spoke to me.”

To create the Flower by Edie Parker line, Heyman worked with craft cannabis brand Flow Kana and traveled to farms in Northern California to test product, eventually settling on three lines—cherry cheesecake (a heady indica strain), pineapple rising (an energetic sativa strain), and banana jam (a hybrid hyped as “a unique hostess gift for any dinner party”). All are outdoor and sun-grown by farms with at least one female partner. “We wanted the THC levels to not be crazy high and [the production] small batch—that narrows down your options,” she says. “Plus, they all had fruit names and all of our pipes are fruit [shaped].”

Heyman leaned on San Francisco-based Flow Kana’s expertise in producing and packaging, then bought its batch wholesale to sell through Edie Parker and distribute via weed-delivery company Emjay in and around West Los Angeles and Oakland. There was no additional cost for Heyman’s input on the strains and design aesthetics.

“Flow Kana was surprised that a fashion New York brand wanted to do it, but I think our story helps with the mainstreamification of cannabis for them,” Heyman says. Another client: David Bronner, the CEO of Dr. Bronner’s soaps who launched Brother David’s weed line earlier this year. Flow Kana has also helped Sundae School, a streetwear label that sells at Barneys New York, branch out from cannabis-inspired clothing to actual cannabis.

“I’m a firm believer that cannabis is part of culture. If you’re a brand that speaks through the rhythm of culture, it makes sense,” says Jason White, former global head of marketing for Beats by Dr. Dre and now chief marketing officer for Cura Partners Inc., which has a robust white-labeling business for dispensary partners and celebrity projects. The company is being acquired by Curaleaf Holdings Inc., the most valuable U.S. marijuana company with a market value of roughly $3 billion.

Creating a tailored cannabis line reflective of your brand—hypothetically, a Lululemon weed would have a different high and aesthetic than a Monster Energy weed—is a way to be in that conversation. “There is money to be made, and brands know that,” says White. “You want to put out a product that works for you, and you want your followers to understand what you get behind.”

There’s still a high barrier to entry. Laws vary by state; they limit how much a consumer can purchase at a time and how product can be distributed. A bride couldn’t buy enough for a 300-person wedding, for instance, but she could work with a dispensary to create custom joints for a bachelorette party, then bring in her friends to purchase the products individually.

Plus, the cannabis market is bifurcating, says Douglas Cortina, chief executive officer of NorCal Cannabis Co., a vertically integrated company with an 85,000-square-foot campus in Santa Rosa, Calif. The price of high-quality weed—typically high-THC and indoor-grown—is increasing, fetching $100 an eighth of an ounce or almost $13,000 a pound in California. Lower-quality weed is becoming a commodity, ranging from $500 to $3,500 a pound.

For NorCal, creating an order of custom joints, as it did for Georgia rap trio Migos, isn’t typically worth their while. But “if Drake asked for it, we’d do one for him,” Cortina says. The company can produce about 2,000 pounds a month, and even 500 joints only comes out to about a pound of weed.

Richard Batenburg Jr., chairman and president of Clear Cannabis Inc., says it is smaller growers, increasingly pushed out of the industry by more scalable operations, that could benefit most from white labeling. An operator could grow a special strain for a customer and sell it with personalized packaging for about 10 per cent or 20 per cent more than what it would normally fetch, he estimates. “You’re getting at how some of these mom and pop operations could continue to be successful,” he says.

“The interesting thing we will be seeing is more movement of bigger name brands that wouldn’t have touched [cannabis] with a 10-foot pole even two years ago,” says Pamela Hadfield, co-founder of HelloMD, a digital platform for cannabis consumers. If Dolce & Gabbana can release a branded pasta, could a D&G weed be far off?

Asked if he’d ever consider a marijuana product, Greg Chait, founder of L.A. luxury cashmere brand the Elder Statesman, says: “The short answer is yes, but just like anything we do at the Elder Statesman it has to be very genuine to the company, so the process, the flower, the exploration, and the creativity has to feel right for us.” He could very well be talking about belts or socks.

Martha Stewart and Snoop Dogg have developed second careers as pot connoisseurs, and Willie Nelson is well known for his cannabis brand Willie’s Reserve. This July, San Jose-based pot company Caliva announced Jay-Z would be its chief brand strategist. And in April, NorCal announced a joint venture with comedian Chelsea Handler to develop a female-focused line of vape pens and low-dose edibles.

Cortina says NorCal was initially skeptical, because such licensing deals are a common way for celebrities to slap their name on weed and get paid. But Handler impressed them with her knowledge, and they formed a company that they control in which Handler owns a large stake. She was particularly interested in a weed high in THCV, a lesser-known marijuana compound that may be an appetite suppressant. NorCal didn’t have that strain, so it looked to the wholesale market before deciding to cultivate its own. The first products are slated to be released in November.

Littman says fashion companies have an edge: They have an established aesthetic and can leverage their signature color or mood to design their cannabis products and packaging. “If you know what your price point is and color palette, you can work backward,” he says.

“I really did see a path where we are creating this lifestyle brand,” says Edie Parker’s Heyman. “I didn’t think the world needed more shoes or handbags.”