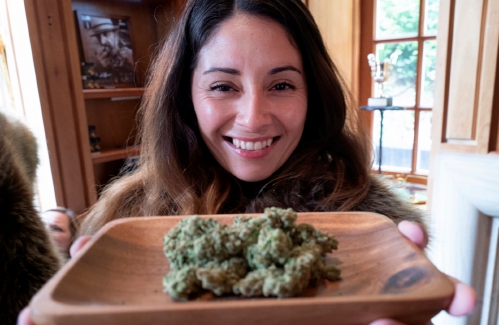 AMHERST — A public health investigation led by a UMass researcher has found that cannabis-related poison control calls for children and teenagers doubled after medical marijuana was legalized in Massachusetts.

“The good news is that the number of cases were relatively small, but we expect … a greater number of households to have legal cannabis products after legalization for adults’ general use,” said UMass injury prevention researcher and assistant professor Jennifer Whitehill, who led the investigation.

Cannabis-related calls among the age group remain relatively uncommon, amounting to just 0.15 percent of all poison control calls for ages 0-19 taken over the course of the investigation. This figure represents 98 calls in which marijuana was the only substance involved, while 120 additional calls involved marijuana and at least one other substance.

Whitehill worked with UMass graduate Calla Harrington and staff from the Regional Center for Poison Control in the investigation.

The study analyzed data from the Regional Center for Poison Control and Prevention at Boston Children’s Hospital from 2009-2016. Massachusetts legalized medical marijuana in 2012, although the first medical marijuana dispensary in the state did not open until 2015.

While the statistic represents a small portion of overall calls, Whitehill said these cases are preventable if greater measures are taken to safely store medical marijuana products. She also pointed out that this increase occurred despite the state implementing “pretty good packaging and labeling requirements.”

Although the researchers do not know how marijuana products were stored in cases of accidental exposure, Whitehill said it’s reasonable to think that “presumably, they’re not being kept securely out of reach” from children.

“I think that this study highlights the need for people who have children in their homes, and who may also have cannabis products in their home, to pay really close attention to safe storage,” Whitehill added. “And maybe that’s not something that we’re talking about so much.”

Almost 80 percent of calls came from health care facilities, according to the study, and most cases saw “moderate and minor effects.” Four cases saw “major effects.”

“Severe cases can involve difficulty breathing, which can be very scary if parents don’t understand why that’s happening,” she added.

Just over a quarter of cases were reportedly unintentional, according to the investigation, and 19.4 percent of calls were for children from birth through age 4. Cases involving young children were mostly caused by edible marijuana consumption, while teenagers were more likely to experience adverse effects after smoking marijuana.

Most age groups also saw an increase in calls involving edible cannabis products, according to the research, which Whitehill attributed to some teenagers being unaware of the potential effects of these products.

Whitehill said that she “expects the calls to the poison control center to increase even more” with the recent legalization of recreational marijuana in Massachusetts.

The Regional Center for Poison Control and Prevention says the number of calls about children 5 years old and younger nearly tripled in the first seven months since recreational pot shops opened in November.

If someone is experiencing adverse effects from marijuana, Whitehill said calling poison control is a suitable step.

“Certainly, if someone thinks they’re having a health issue and it’s related to cannabis, calling Poison Control is an appropriate step, because they have trained specialists who can help people figure out if medical attention is needed right away,” she said.