Cannabis may not be quite as common as Corona at your summertime cookouts—not yet, anyway—but chances are plumes of skunky smoke are becoming a more frequent fixture at your parties. After all, weed enjoys some sort of legality in more than half of the country’s states.

That said, there are still barriers to casual consumption that make weed feel forbidding to first-timers. Many advocates and others working in the industry are quick to point out that, despite the compulsive urge to draw parallels between cannabis and alcohol, the comparison is like apples and, well, broccoli.

Part of the problem? For novice consumers, figuring out serving size and method of enjoyment is far from obvious. In order to shake the plant’s stigma, it’ll be crucial we determine some known points of reference that beginners can relate to. Just as we know a Lager in the wake of a carb-heavy meal will have a very different effect than a Double IPA post-gym, not all cannabis products are created equal. 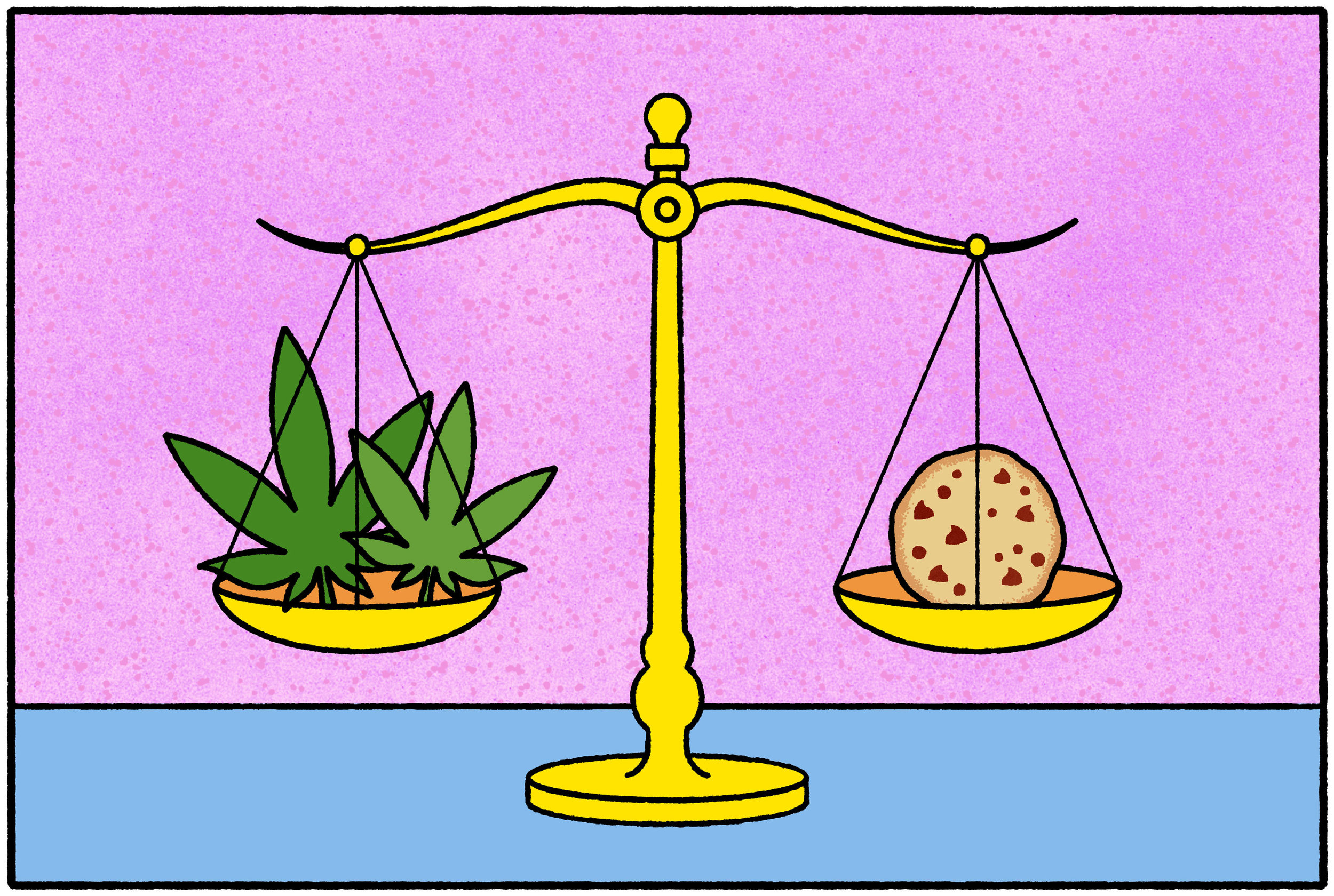 Ask anyone who attended a state school and you’ll unearth a bevy of terrifying tales of pot gone wrong. A gravity bong rip from a rigged Publix brand sports drink bottle that resulted in an impromptu, involuntary, 20-second nap. Pulling so hard on a stranger’s pen at a show they had to pep talk themselves in a filthy bathroom mirror with something along the lines of, “No, your hands are fine.” Eating an enormous cookie and getting so freaked out they have to lock themselves in their bedroom, watching The Wedding Planner in a desperate attempt to relax. Okay, maybe those are all autobiographical.

But without any federal testing to map out weed’s various nuances—including psychoactivity opportunities, aka the part that sparked my public restroom pep talk—navigating your “limits” can be a bit trickier than, say, instating a personal, two-drink maximum.

One complication: with weed, there isn’t just a single component—like ABV with booze—you should take into account. Tetrahydrocannabinol (THC) is one of hundreds of cannabinoids (pronounce it “kuh-NAB-in-oyds” so you don’t sound like an idiot like I did…for years) present in pot. It’s also the psychoactive one most often credited with making you feel “high,” and releases its special magic only when exposed to heat (like a lighter or, for edibles, the decarboxylation process).

However, you should also look at a specific strain’s cannabinoid breakdown. One cannabinoid to consider is cannabidiol, or CBD. The supposed universal cure-all is being dumped into everything from lattes to hummus, and promises to treat anxiety and pain, among other ailments (despite varying degrees of scientific validity). It isn’t psychoactive. Cannabigerol (CBG, a non-psychoactive cannabinoid whose primary purpose is turning THC into CBD) and cannabinol (CBN), are others to consider. Then there are the trichomes—those sometimes-colorful little hairs on a bud—as well as aromatic terpenes that can also drive your mental and physical experiences.

But consider THC and CBD (especially the former) as the rockstars here—the two most important cannabinoids guiding your stony (or not) experience.

Until politicians make cannabis federally legal, there’s limited legitimate research to back up anecdotal claims about the plant’s powers, which range from easing social anxiety to curing cancer. So! It isn’t as simple as boiling down a component into a metric as singular as TBV—THC by volume, a measurement I just made up.

But if there’s one element to consider, THC has been a major focus as weed rushes from back alleys to boutique-style dispensaries that cater to people who aren’t interested in all the nuanced components rolled into their bespoke blunts. (Not to mention, in places like Georgia where weed has extremely limited and opaque laws outlining its availability, there isn’t always a way of knowing what the hell you’re smoking anyway.) THC defines a strain’s potency, with some percentages in certain heady strains like Ghost OG and Chemdawg creeping well past the 20% mark. 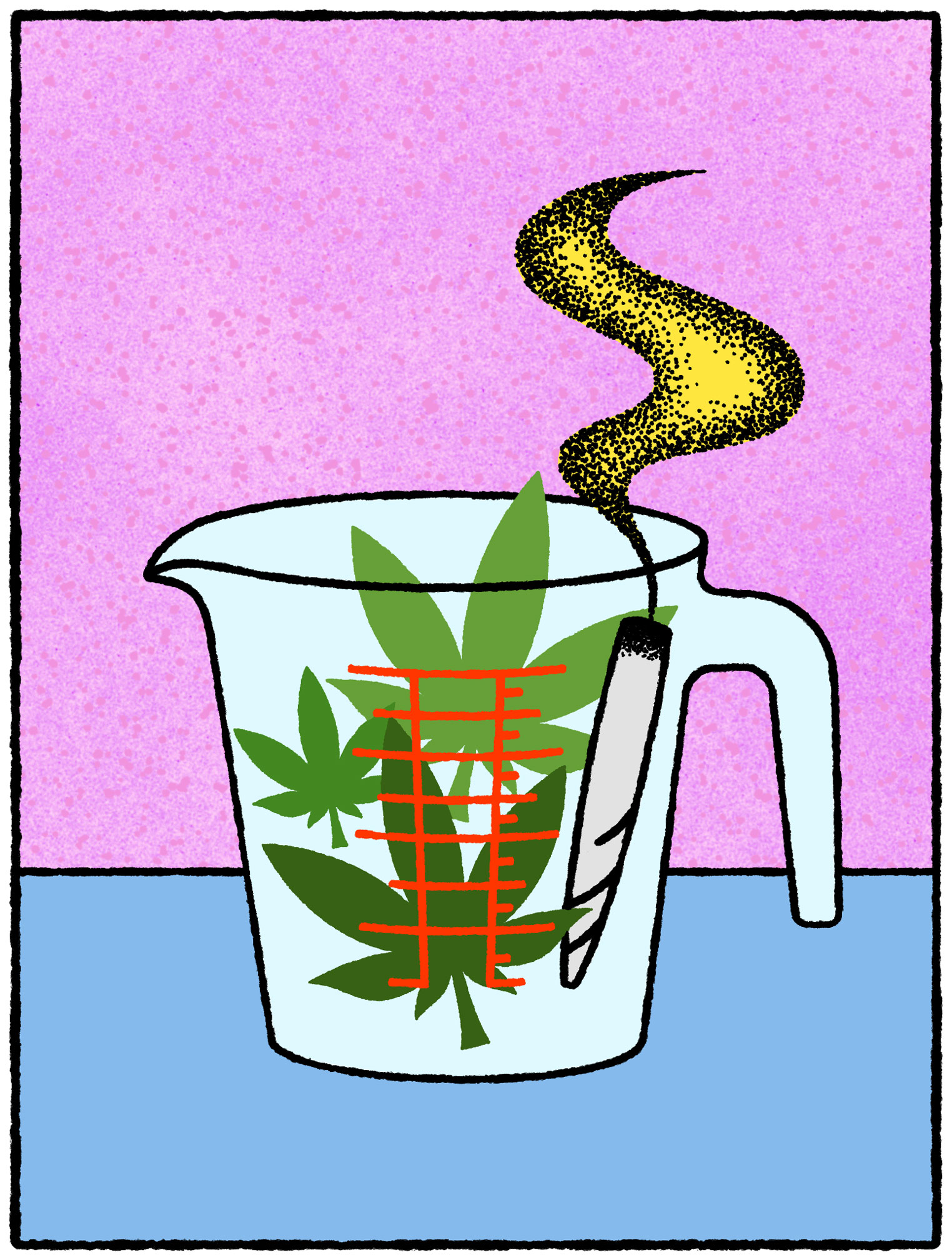 “I would say for people who are new to smoking…if your cannabis is at 15-20% THC, that’s pretty strong,” The Official High Times Cannabis Cookbook author Elise McDonough says. She also points out that, as with beer, most people aren’t consuming cannabis simply to get hella ripped, bruh.

Beyond each strain’s potency, every individual also has their own unique endocannabinoid system (ECS), which is the body’s cell receptor network that interacts with these cannabinoids. So every person will have a slightly—or hugely—different experience with every single strain (not unlike how mood disorder pharmaceuticals aren’t one-size-fits-all). Plus, people can build up tolerance to cannabis differently than they do to alcohol.

“Some of these people who dab or take cannabis really regularly, they won’t even feel five milligrams [of THC],” Katie Stem, Peak Extracts CEO and co-founder, says. “Even the biggest of drunks will feel something after two drinks, right?”

And although weed is only legal on a limited state-by-state basis, another consideration: you ingest weed in many more ways than simply smoking. California and Colorado define a single serving of edibles as 10 milligrams of THC, which starts to answer the question of dosing—but edibles don’t summon an immediate effect the same way smoking or vaping does.

“It takes two hours for you to fully feel it in your body,” McDonough says. “So you definitely don’t want to go beyond the recommended guidelines if you’re someone who’s new to [cannabis].” She adds that mixing alcohol with edibles—what the youth call getting “cross-faded”—isn’t a smart move for canna-curious beginners.

Recently, I recommended Dosist to a family member battling insomnia who had never before dabbled in smoking anything—let alone weed. After a trial-and-error rodeo testing a regular vape pen loaded with heavy, sleep-inducing indica—and the dizzying effect of a (if I’m being honest, HIGHLY RESPECTABLE) ginormous hit he wasn’t ready for—we turned to the brand hinged on “dosing” out a single serving with each pull. Dosist pens are unique in that they buzz to signal the person enjoying it has just finished “one” weed, in a sense.

“Pain levels [are] another thing where alcohol doesn’t really have a factor,” Stem says. “If someone’s in pain and they consume cannabis, it will affect them less and so when we’re dealing with medical patients, they really do need more.” 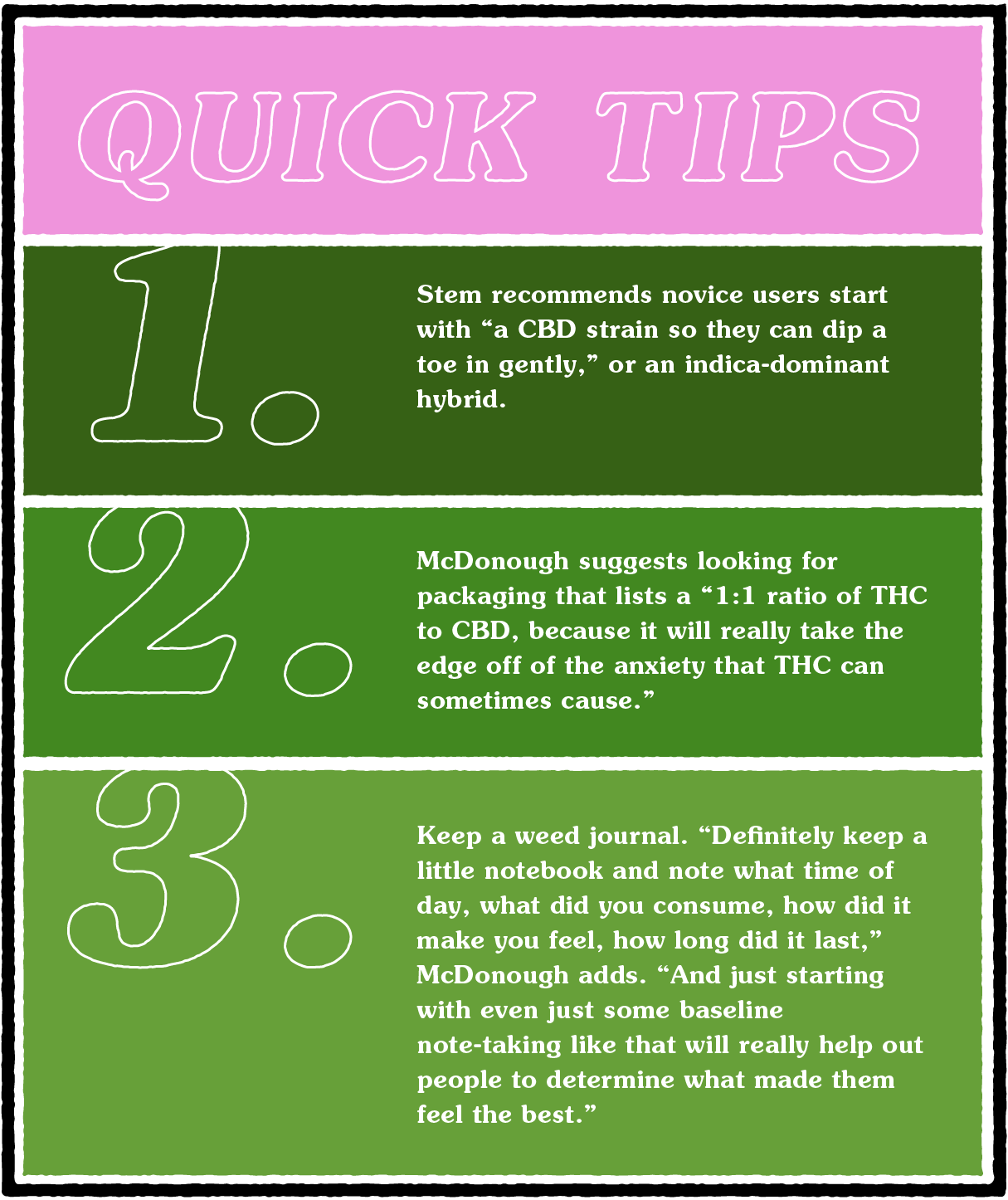 So, although burgeoning edibles laws show a glimmer of promise in terms of standardizing a unit of “one weed,” we’re unfortunately just not there yet. For consumers, building familiarity still requires a long-ass individual process to figure out what works for you. But, that’s why companies like Goldleaf sell detailed “patient journals” in which folks can track various nuances of each experience, with the theoretical goal of finding their own collection of pet strains, dosages, and more that they enjoy. You can also take the Beca route and keep a collection of haphazard notes in your phone, recording similar criteria and noting various strains people similar in temperament to you (in my case, highly anxious, loud, emotional…) enjoy.

The good news? At least the homework is pretty fun.