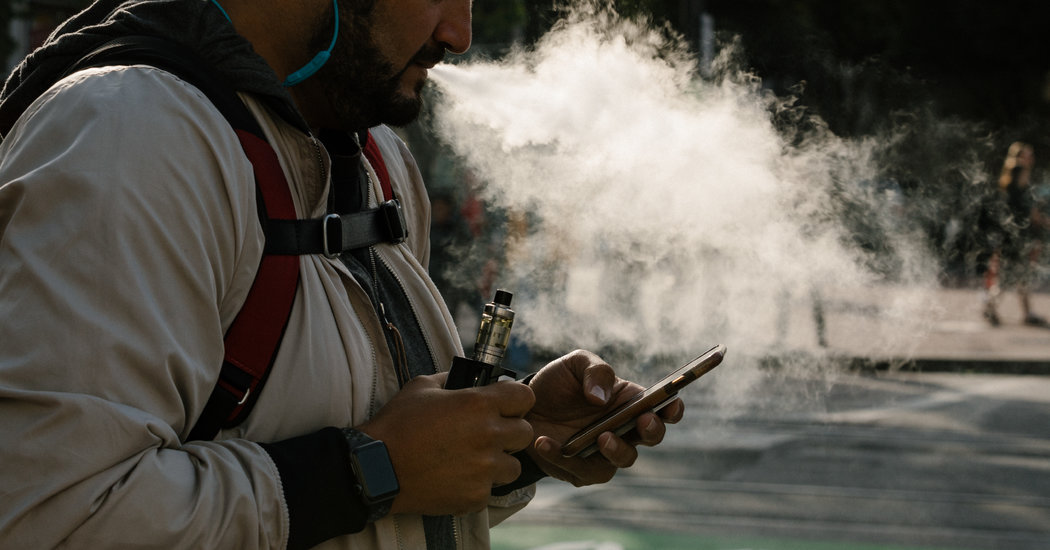 A patient in Illinois is the first to die of a mysterious lung illness linked to vaping, public health officials announced on Friday.

The death occurred as doctors and hospitals nationwide report an increasing number of vaping-related respiratory illnesses this summer: 193 cases have now been reported in 22 states, including 22 cases in Illinois, officials said.

They have been stumped in recent weeks by the cause. State investigators have not found a common link — other than vaping in general — among the patients turning up in emergency rooms.

Many patients, including some in Illinois, have acknowledged vaping of tetrahydrocannabinol, or (T.H.C.), the high-inducing chemical in marijuana, according to statements from federal and state health agencies.

But officials don’t know whether the ailments have been caused by marijuana-type products, e-cigarettes, or some type of street concoction that was vaped, or whether a contaminant or defective device may have been involved.

The Illinois patient’s death was disclosed during a news conference held by officials at the Centers for Disease Control and Prevention, the Food and Drug Administration and the state of Illinois.

They did not provide details about the patient’s identity, saying only that the person was an adult who had vaped recently and then succumbed to a severe respiratory illness.

Health officials did not say what product the patient had used, whether an e-cigarette or other vaping device; nor did they specify what substance was vaped.

Amid the lack of information, investigators are scrambling to find shared links to the respiratory problems. Officials said earlier this week that many patients, most of whom were adolescents or young adults, had described difficulty breathing, chest pain, vomiting and fatigue.

The most seriously ill patients have had extensive lung damage that required treatment with oxygen and days on a ventilator. Some are expected to have permanent lung damage.

“More information is needed to know what is causing these illnesses,” said Ileana Arias, an official with the C.D.C., said on Friday.

The Illinois patients have ranged in age from 17 to 38, according to the state health department.

State health departments are handling most investigations into the respiratory illnesses.

“We’re at a relatively early stage of understanding,” Mitchell Zeller, director for the Center for Tobacco Products at the F.D.A., said on Friday. The collective agencies were throwing “a lot of resources at this,” he added, but part of the problem was that state investigations are not always complete, making it difficult to form a clear picture.

One theory, as of yet unproved, is that illnesses may result from substances that are thought or known to be toxic in vaping products, which use heat to vaporize nicotine and other inhalants.

Brian King, deputy director of research translation at the Office on Smoking and Health at the C.D.C., said that potential irritants include “ultrafine particulates, some heavy metals, such as lead,” and, he said, there “are also concerns about some flavorings.”

But, he added, “We haven’t specifically linked any of those ingredients to specific cases.”

Dr. Michael Lynch, medical director of the Pittsburgh Poison Center at the University of Pittsburgh Medical Center, said the lung injuries doctors there are seeing are consistent with chemical inhalation injuries.

Dr. John Holcomb, a pulmonologist in San Antonio, Tex., noted that the F.D.A. has no control over the ingredients used in vaping products.

“The problem is we don’t know what’s being inhaled through these devices, of which there are five or six hundred different kinds,” he said. “We have to assume that some of them may be dangerous and some may not be dangerous.”

Others suggested that individuals are emptying out commercial nicotine pods and filling them up with a combination of T.H.C. oil and other chemicals.

If the respiratory illnesses can be traced to T.H.C.-laced vapors, public health officials and doctors expressed concern that it may signal the emergence of a second front in the battle against youth vaping: the growing use of unregulated, bootleg or black market cannabis liquids.

“We believe that they are getting empty cartridges from somewhere and filling them with their own products,” said Nancy Gerking, assistant director of public health in Kings County, Calif., which has had numerous cases. “We don’t know what they are cutting it with or anything else.”

Until recently, these cases have been off the radar of most doctors and public health officials, who were already struggling to stop youths from vaping standard e-cigarettes. But cannabis liquids and oils have become more widely available online and in many stores. And because the ingredients may not be disclosed at all, unsuspecting consumers may be exposed to a cocktail of hazardous chemicals.

The e-cigarette market has broadened to counterfeiters and a range of devices that can be packed with different substances, including marijuana, but also various flavors and concoctions that may be mixed inexpertly.

Public health officials, however, declined to say if they yet are seeing a pattern that would make clear whether the problematic products are made by mass-market companies or counterfeiters, or whether the inhalants involved are standard to many vaping products or made or mixed by consumers themselves.

The recent revelations could also further complicate the tarnished image of the growing e-cigarette market. For several years, the industry and top-selling companies, like Juul, have faced scrutiny because of the rising popularity of e-cigarettes among teenagers, which threatens to create a new generation of nicotine addicts who may become eventual cigarette smokers.

The Best CBD Beauty Products To Use – SFGate