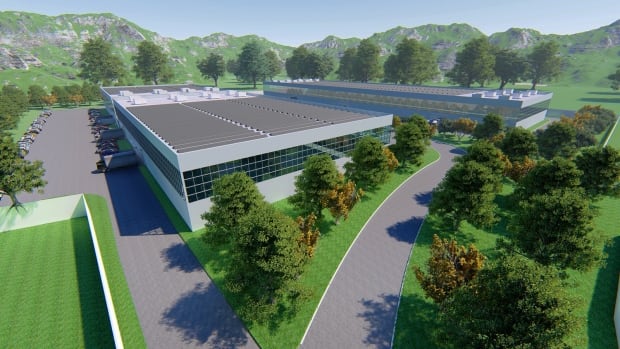 Wild Coast Canna hopes to have a building permit for its 370,000 square-foot 'Cannapark' within the next six months, but nearby Sproat Lake residents say they’re not keen to have the facility so close to their neighbourhood. (Photo courtesy of Wild Coast Canna)

Reg Cocks says he was „shocked” to learn that a large-scale cannabis facility might soon be built just down the road from his house.

Cocks said more than 100 residents from Sproat Lake, a community of around 2,500 people just north of Port Alberni, crammed into a meeting room Wednesday to voice their concerns.

„I moved out here for the quality of life, the seclusion, the serenity, and wham! They want to do what?” he said incredulously.

Last month the company, Wild Coast Canna, held a public meeting to share their plans for a 377,000 square-foot „Cannapark,” which would include 50 acres of outdoor growing space. The property is located between Airport Road and Great Central Lake Road.

Cocks said the community voiced concerns over air quality and the smell, given the town sits in a valley where poor air can settle.

There are also concerns over the amount of fertilizer that might leach into the rivers and the lake, and how much water the plant might use, given the town runs on a well system, Cocks said.

He added that one young family with two children is currently building their „dream home” across from the site, and they’re „devastated” by the news.

Angie Fernandes, director for Wild Coast Canna, said the company — which many of her family members are part of — chose the Alberni Valley given the availability of land, and because the area is close to where her family members live.

„We’re also concerned about the environment and we’re committed to being good neighbours,” she said. „[The facility] will be a closed system that will have the best available technology for [controlling] air emissions,” she said.

Earlier this year, another industrial cannabis proposal was made near Beaver Creek in the Alberni Valley. Cocks said he suspects companies are interested in the area because „rural land is still relatively cheap.”

Fernandes said the new facility would stimulate economic growth by bringing hundreds of jobs to the region, but Cocks said it’s important that the Alberni-Clayoquot Regional District prioritize residents' health over the economy.

„Are these the right jobs? Is this the direction we want to go?” he said.

The Alberni-Clayoquot Regional District’s recent zoning bylaw states that non-medical cannabis production must take place a minimum of 30.48 metres from all lot lines.

Fernandes said the company will abide by all regulations and hopes to obtain the company’s building permit within the next six months so construction can begin early next year.

Douglas Holmes, the regional district’s chief administrative officer, said if the company meets the zoning requirements and is compliant with the B.C. building code, they’ll be granted the property.

„We prepare the [zoning] rules and regulations to balance the economy, the environment, [and] peoples' use and enjoyment of their property,” he said.

He added that „extensive community outreach” on developing the district’s regulations for zoning around cannabis production happened last September.

„Approximately eight residents came to the public hearing,” he said, emphasizing the importance of more public engagement during the district’s monthly board meetings.

Cocks said „everyone’s devastated” and a few residents will be giving a presentation at the next board meeting on Wednesday.

„We want a moratorium on all these commercial cannabis operations now,” he said. „Then zoning changes to [industrial facilities] with the proper setback from any residential area.”

Why this N.J. county has the potential to become a leader in cannabis cultivation – NJ.com