Wastewater samples collected from across the country have given the federal government a better indication of what drugs are being used in Canadian cities, suggesting the highest consumption of cannabis is in Halifax while the highest use of methamphetamine was in Edmonton.

Statistics Canada has reported its findings from a 12-month pilot project beginning in March 2018 that involved collecting municipal wastewater from sewage treatment plants in five large urban centres. Samples from Halifax, Montreal, Toronto, Edmonton and Vancouver were tested for traces of cannabis, methamphetamine and cocaine, and the results show varied use depending on the city and the time of year.

Cannabis consumption across the country was varied. A compound called 11-nor-9-carboxy-tetrahydrocannabinol (THC-COOH) is produced by the body when cannabis is consumed. The average for THC-COOH for all sites was 450 grams per million people per week.

Halifax residents were the highest consumers of weed at 936 grams. Montreal and Toronto are second and third at 833 grams and 327 grams, respectively. Vancouver, often considered a marijuana mecca, didn’t break the top three. Vancouver pot partakers averaged 313 grams and in Edmonton, the average was 244 grams.

According to Tim Werschler, who designed and implemented the study, the research not only provides information about cannabis use in Canada, it also helps the federal government estimate how much cannabis is still being bought on the black market despite being legalized in October 2018. 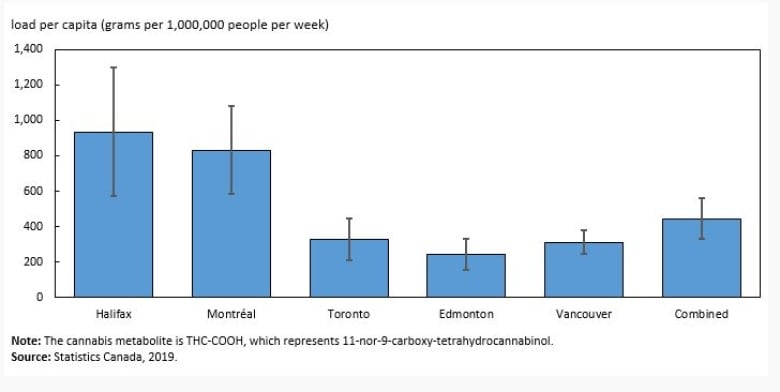 This infographic shows the cannabis metabolite load per capita by city for March 2018 to February 2019. (Statistics Canada)

The research shows cannabis use was lower in western cities, but according to Werschler, these cities have higher use of methamphetamine.

„Vancouver and Edmonton were definitely higher,” Werschler told CBC’s The Early Edition in a phone interview. The average levels in these two cities — Edmonton, 534 grams, and Vancouver, 490 grams — were almost four times higher than in Montreal and Toronto. Halifax, which had the highest levels of cannabis consumption, had the lowest meth use.

Meth use in Halifax was over six times lower than Toronto, the next-lowest city.

The testing also looked for evidence of opiates, which break down quickly in wastewater and leave morphine traces behind. Werschler said Vancouver and Edmonton were considerably higher for morphine than the other three cities.

„It is evidence that these [morphine] levels reflect higher illicit use of some compounds,” said Werschler, who suggested that could be heroin or prescription opiates.

In contrast to cannabis and meth, there were no significant differences between cities when it came to cocaine use. Cocaine use averaged 340 grams per million people per week across the country.

This infographic shows the methamphetamine load per capita by city for March 2018 to February 2019. (Statistics Canada)

Cannabis also showed seasonal spikes in May, June and December 2018. There were no seasonal variations in meth.

Statistics Canada explains in the report that because this is the pilot year, more data is required to determine if the seasonal variations repeat themselves every year.

The agency notes there are other limitations to the data.

The findings could also be influenced by differing factors in city sewage systems, such as chemicals that are introduced from industrial activities. The human body also processes and excretes different drugs differently.