Gronk to focus on growing CBD industry with Abacus Health

Multiple Super Bowl-winning tight end Rob Gronkowski is turning his attention to CBD as he takes a break from football. “Gronk,” who has stepped away from football “for the foreseeable future” amid significant injury troubles, has been named a CBD advocate for Abacus Health Products. Adding to an already-diverse list of extracurriculars including professional wrestling, horse racing, and voiceover work for ‘Family Guy,’ the 30-year-old will work with the company on a “Gronk inspired” product line to be launched in 2020. The deal comes with an upfront fee for Gronkowski as well as shares in the company and future royalties from the planned co-brand.

Cannabis stocks have declined so much that they’re now attractive to value investors. That’s according to iAnthus Capital CEO Hadley Ford who stated the sector is currently in a bear market with the regulatory issues at CannTrust, the firing of Canopy Growth co-CEO Bruce Linton and antitrust reviews of several U.S. acquisitions all weighing on the space. Ford told BNN Bloomberg in an interview that he doesn’t expect the U.S. Department of Justice antitrust review of those U.S. cannabis acquisitions, such as Curaleaf’s purchase of Select or Cresco Labs’ takeover of Origin House, to be declined – but could take longer than normal. iAnthus acquired U.S. multi-state operator MPX in a deal that closed in February, making the company one of a select few which has successfully acquired another pot firm under the auspices of U.S. authorities.

Canopy Rivers, the venture capital arm of cannabis company Canopy Growth, reported first-quarter results that showed the firm lost nearly $3 million in the period ending June 30. That’s compared with the net loss of $6.6 million or five cents per share a year ago. Canopy Rivers CEO Narbe Alexander told BNN Bloomberg in an interview the company is primarily focused on making investments in the U.S. and Europe – parts of the world that should see far greater opportunities in cannabis compared to their home base of Canada, which is already quite saturated with publicly listed firms. Alexander also stated the company sees significant opportunities in the space compared to last year amid the recent downturn in the sector. During the quarter, Canopy Rivers made $18.8 million in new investments and the company has earmarked about $25 million for future investments in the subsequent quarter, Alexander said.

26%
— How much Americans believe marijuana usage is “very harmful”, according to a survey released late Monday by Politico and the Harvard T.H. Chan School of Public Health. That’s far lower than the 81 per cent that respondents described tobacco products as “very harmful” to the people who use them. 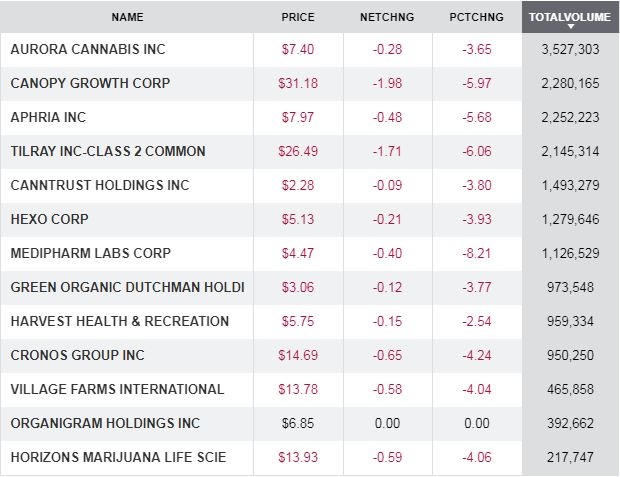