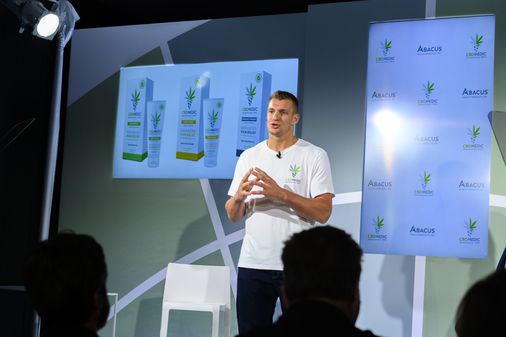 The three-time Super Bowl champion, who announced his retirement from the NFL in March, said he would be working with Abacus Health Products, which makes CBDMEDIC, a line of topical products for “safe, natural, and temporary relief,” according to its website. He said the cannabis compound is the “most safe alternative way that a player can deal with pain.”

Cannabis of any kind, including CBD, is banned in the NFL, though some forms of CBD have been legalized federally.

CBDMEDIC products are made with hemp, a strain of cannabis that is very similar to marijuana but has very little THC, the compound that can make a person high. Hemp is federally legal; marijuana is not.

The hype over CBD has spread internationally. But in the United States, federal and state agencies have thrown cold water on many companies who have attempted to sell products inconsistent with FDA policy.

The FDA has said companies cannot sell food products with CBD, or any CBD product that makes a medical claim. State officials have backed up that ban.

Wakefield-based cannabis company Curaleaf was the latest in a string of companies slapped by the FDA for selling CBD products with unfounded medical claims. Curaleaf later removed those claims from its website.

Topical products like CBDMEDIC are generally allowed, though the medical claims on CBDMEDIC’s website could come under similar scrutiny. The company offers products that claim to “provide safe, fast, and powerful relief” from arthritis aches and muscle and joint pain.

The FDA has said that it intends to crack down on marketing claims by CBD companies out of concern that patients will forgo seeking important medical care because they believe they are using something that will address their condition. An FDA committee is working to figure out regulations for the marketing and sales of CBD products and expects to have an update on that group’s progress in the fall.

While Gronkowski is the latest in a long line of celebrities to promote cannabis, his endorsement could signal a key moment in the drug’s evolving acceptance among sports leagues and mainstream consumers.

“It really is a step toward greater knowledge about the benefits of the substance and it really is important in the NFL, perhaps as much as anywhere in society,” said Steve Fox, strategic adviser for the Cannabis Trade Federation, a national industry group. “It makes a difference when athletes get involved, given the fact that they generally care about what they put in their bodies.”

Other famous football players who have jumped into the industry are Ricky Williams, Joe Montana, and Jim McMahon.

Gronkowski said Tuesday that CBDMEDIC products were “life-changing” for him. He said that when he decided to leave football, he was “not in a good place” and wished he could have used CBD to relieve the pain while he played.

“I needed to recover,” Gronkowski said at Tuesday’s press conference, his voice cracking. “I was not in a good place. Football was bringing me down, and I didn’t like it.”

“During that time, I had countless injuries and nine surgeries which took an absolute beating on my body and my soul. I was hurt both mentally and physically, day in and day out. I decided to walk away from the game for one main reason: I had to recover.”

In Gronkowski’s nine years for the Patriots, he suffered a myriad of injuries, including a broken forearm in 2012, which took four surgeries to heal. He also tore his ACL in 2013, and in the Super Bowl this past February, a shot to his leg left him with major swelling for days.

He implored sports leagues to consider making changes to their cannabis policies to allow athletes to use CBD while recovering from injuries.

“I’m here today to appeal to the sports-governing bodies of the world to update their position on CBD whether that’s the NBA, MLB, or NFL,” he said. “It’s just time.”

The NFL announced in May the creation of a new committee to research “pain management and alternative therapies,” including the use of marijuana among athletes.

At the time, NFL commissioner Roger Goodell said the committee would study marijuana but their studies would also be “much broader than that.” Dr. Allen Sills, the NFL’s chief medical officer, also said marijuana and CBD would be considered as alternative treatments.

“We’ve charged the committee with looking at any and all strategies for treating pain,” Sills said at the time. “Marijuana, cannabinoids, CBD, those things will be on the list.”

Gronkowski also said Tuesday he didn’t have plans to return to football in the “foreseeable” future, but that he didn’t rule anything out.

Ben Volin of the Globe Staff contributed to this story. Felicia Gans can be reached at felicia.gans@globe.com. Follow her on Twitter @FeliciaGans.