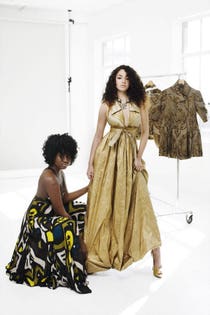 Cannabis has been coming out of the closet for some time. Now it will get its due under the bright lights of a big-time runway show during New York Fashion Week. The bold vision of designer and Project Runway alum Korto Momolu will be in the spotlight as the spirited Bravo TV star unveils her unique take on the new world of legalized cannabis inspired by women leading the industry.

But you won’t see stoner-esque tie dye or giant green marijuana leaves on the sophisticated ready to wear and girly ath-leisure collections by the Liberian-born stylist.  Momolu, who has shown her cutting edge work featuring vibrant African prints and body positive models at Fashion Week since 2009, will send clothing down the catwalk that she says reflects the „mood” of the women pushing a new conversation about cannabis. It’s not about getting high. It’s about good health, wellness and style.

„We are incorporating hemp and jute, linen, cork…sustainable fabrics. But then we have brocade and sequins and really pretty pieces that we’re just kind of putting together just to show another view of it (cannabis), to show what cannabis [as an industry] looks like,” enthused Momolu from her home studio in Little Rock, Arkansas, as she raced to put the finishing touches on the show sponsored by Women Grow, the largest national network of professional women in the marijuana and hemp fields.

As an entrepreneur herself, Momolu relates to the universal challenges of building a business in a cut-throat sector. As such, the collection incorporates metals including rose gold, which she says represents the toughness women need to succeed in their careers and in life.

„When you take a metal and create things out of it, it can be just about anything and it [can] withhold so much. And as a woman, that’s how I would describe myself and my life…We have to take so much but we can take it and keep going,” explained the designer and mother, who competed on season five of Project Runway, Project Runway AllStars and was named a „Fan Favorite.”

This isn’t the first collaboration between Momolu and Women Grow. At its annual summit in Washington, DC this past June, Women Grow hosted a small show with Momolu and introduced a capsule collection of black and gold leggings and tops that sold out on the spot.

Women Grow’s CEO and chairwoman, Dr. Chanda Macias had been a long time fan of the designer’s from afar and a self-described „closet Project Runway junkie,” when a mutual friend finally introduced the two.  They hit it off on their first phone call as Macias learned that that Momolu was supportive of plant-based medicine and had even considered seeking it out to treat her nagging arthritis.  Macias, who also owns National Holistic Healing Center, a Washington, D.C. medical marijuana dispensary, pitched Momolu with an idea she and her team had been mulling over for while: Could high fashion bring together women working in cannabis and also serve as a unique way to invite female professionals from other fields to consider jumping in, too?

„We decided that, 'Hey, maybe the best way to meet women is where they are. And they’re into fashion. We just don’t wear pants and a top. We wear embroidered shirts. We wear skirts that flair.  We wear heels. That is where we are,” said the mom of four who built her career as a research scientist investigating oral diseases and treatment at Colgate-Palmolive before launching her business.

„I want to be a catalyst for change, not only for the plant itself, but also for the women, economically [to show them] how it can empower them, it can inspire them. And they can be the next generation of cannabis and hemp leaders. Sometimes we just need that awareness to let them know, 'This is your calling,” she explained of Women Grow’s mission.

The percentage of women in senior-level executive positions at cannabis companies stands at 37%, according to a Marijuana Business Daily survey conducted in June 2019. In terms of gender diversity, the industry has consistently outpaced other sectors of the economy, according to MJBizDaily Research Editor Eli McVey.

Women of color hold a smaller number of high-level roles in cannabis says Women Grow president Gia Morón. Through its work, the company aims to address that disparity. Inclusion is a theme that will be woven throughout Momolu’s show. She has long been deliberate about diversity in her model casting.  As in her previous presentations, when the lights go up on Stage C at Chelsea’s Pier 59, attendees will see models of different shapes, sizes, races and ethnicities.

„I want everybody to look at the runway and see themselves in these clothes,” said Momolu.

Perhaps they may see a future in cannabis, too.

CBD At Your Restaurant: Regulations To Use – Total Food Service