Senior operating staff working at CannTrust’s Pelham, Ont. facility late last year brought cannabis seeds from the black market into production rooms, leading to some illicitly-grown pot flowing into the legal market, according to internal company documents obtained by BNN Bloomberg and four sources directly familiar with the matter. Shares of CannTrust fell as much as 6 per cent after the story was published, although they have mostly recovered since then. Cannabis plants from at least two strains that originated from the black market-sourced seeds entered production rooms where they were fully grown to flower, packaged and sold into the recreational market, according to the sources. Adding cannabis seeds obtained through the black market would have allowed CannTrust to significantly bolster its production at a time when it had overcommitted itself with supply contracts with provinces and other licensed marijuana producers, the sources said. CannTrust spokesperson Jane Shapiro told BNN Bloomberg in an emailed statement that “to the best of our knowledge, no product using seeds from unauthorized external sources was introduced into the market.”

CannTrust lays off 20% of workforce in effort to cut costs

Meanwhile, CannTrust announced late Thursday that the company is laying off 180 staff, roughly 20 per cent of its workforce, following Health Canada’s non-compliance finding in July. The layoffs are expected to provide $9 million in annual cash savings and $2 million in severance costs, the company said. „We remain fully committed to building the organization we need for future success and rebuilding the trust of all of our stakeholders,” said CannTrust interim CEO Robert Marcovitch in a statement. A CannTrust spokesperson later told BNN Bloomberg in an email that none of the layoffs were with cause.

Canada’s Indigenous groups held the first-ever National Cannabis Summit in Vancouver this past week, addressing various issues in managing how pot legalization is impacting their communities. The Cannabis Wire reports that the two-day summit focused on how First Nations groups can work with the Canadian government to amend current cannabis legislation “to create a specific space for First Nations,” as well as discussing how to ally with government partners “to assert the rightful, legitimate, and legal place of First Nations jurisdiction.”

The mystery surrounding severe respiratory illnesses from 215 reported cases in 25 U.S. states continues, with news that some of those incidents were the result of using cannabis vaping products containing vitamin E. The New York State Department of Health said in a statement that, “At least one vitamin E acetate containing vape product has been linked to each patient who submitted a product for testing.” NPR reports that vitamin E is usually safe as a dietary supplement or cream, but vaping it could be harmful, according to state health commissioner Howard Zucker. The additive is often used in black market vape cartridges and is not an approved additive for vape products approved by New York’s medical marijuana program.

– The price of a gram of cannabis in Canada, up 1.1 per cent from the prior week, according to the Cannabis Benchmark’s Canada Cannabis Spot Index. This equates to US$2,320 per pound at current exchange rates. 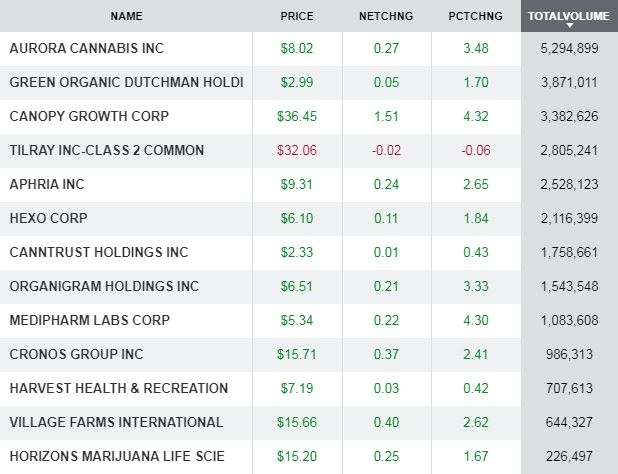