The question is simple enough: Should the NFL soften its hard-line stance on marijuana?

No one with the Chargers cares to answer, a team spokesman says. Same goes for the Rams where, at a summertime practice, one player after another declines to comment.

This reticence might seem unusual given that league executives recently agreed to include cannabis in a study of alternative pain therapies.

But pro football has a history of keeping marijuana on the banned substance list, even as public opinion has gravitated toward its legalization and available research has identified its potential to alleviate a range of ailments.

Players wanting to use cannabis or related products, such as Cannabidiol extract, have needed to do so quietly, sidestepping periodic tests. When Commissioner Roger Goodell announced the new NFL initiative last spring, he chose his words carefully.

“There are a lot of alternative pain medications and treatments,” he said.

Any suggestion of an impending policy shift might be premature. With the start of another season, the loudest call for change has come from former stars who claim the league has, for too long, overlooked a therapy for not only aching knees and shoulders but also, perhaps, brain trauma.

“Everyone knows this game is brutal,” said Kyle Turley, who spent eight years on the offensive line. “Cannabis saved my life, period, and it could help a lot of other players.” 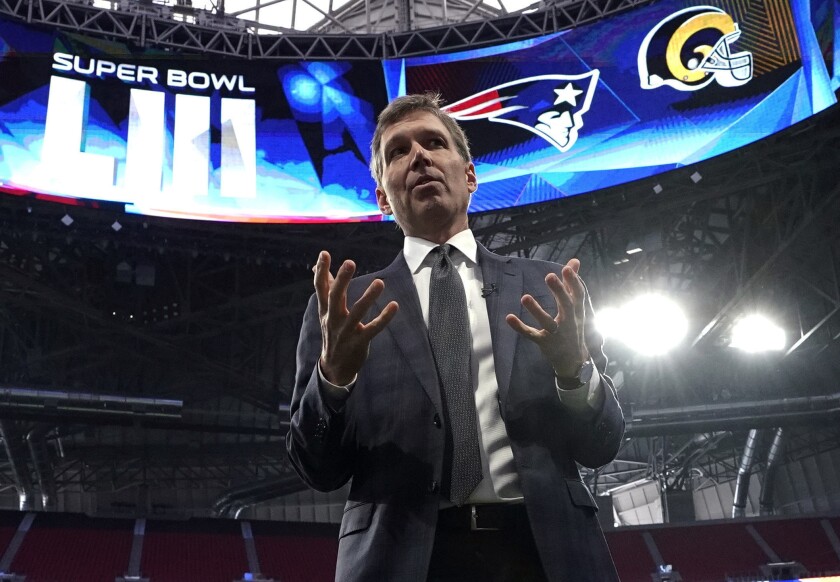 Allen Sills, the NFL’s chief medical officer, believes more research has to be done to gauge the effectiveness marijuana can have on alleviating pain.

It was last May that NFL executives joined with the players union to announce a series of initiatives aimed at athletes’ well-being.

Each team must now retain a behavioral health clinician to be available for players at the training facility at least eight hours a week. Goodell said: “We’ve long been focused on mental health but this, I think, takes it to another level.”

League and union leaders also created a joint committee to study issues involving therapy for injuries. Teams have been told to designate a pain management specialist and monitor all drugs — including opioids — prescribed to players.

The decision to include cannabis in a study of medical alternatives generated the biggest headlines.

A Gallup poll last fall found that 66% of respondents supported legalization. Eleven states already allow for recreational marijuana, with 33 permitting medical use. But the NFL’s chief medical officer made it clear the league will not be swayed by public sentiment.

“I think that the science, unfortunately, has lagged behind a lot of the popular opinion and press on this,” Allen Sills said. “We have a lot more opinion than we do science on the use of marijuana for pain.”

Cannabis remains a Schedule I drug on the federal level, defined as a substance with no currently accepted medical use and a high potential for abuse.

This designation places significant restrictions on researchers, who are limited to studying a relatively narrow range of cannabis products supplied by government-approved growers.

A 2017 study by the National Academies of Sciences, Engineering and Medicine stated that “conclusive evidence regarding the short- and long-term health effects — both harms and benefits — of cannabis use remains elusive.” The same goes for Cannabidiol, or CBD, which has no psychoactive effects.

“It’s complicated,” said Dr. Donald Abrams, a professor at UC San Francisco. “But if players are thinking that cannabis would be useful for pain, there is some evidence to support that.”

Initial studies aren’t the only reason that Abrams and others in the medical community are optimistic about the medicinal value of cannabis .

It’s not like some magic potion that hippies in Northern California conjured up. The NFL could run one study in training camp and change everything.

Kyle Turley, former NFL player on the benefits of marijuana for pain

At UC San Diego, Dr. Mark Wallace has seen positive results in treating his patients. He believes that athletes using cannabis directly after an injury might avoid chronic pain later in life. He adds, “It’s an alternative to opioids, and we know what opioids have done to this country.”

In 2016, ESPN the Magazine conducted a poll of 226 NFL players to gauge their opinion on the matter. Nearly 60% said they worried about the long-term effects of painkillers. Not surprisingly, 61% said fewer players would take such drugs if marijuana were an allowed substance.

But the greatest potential for football extends beyond pain management. In Israel, a global leader in cannabis research, tests on laboratory animals have shown cannabinoids might act as a neuroprotectant, decreasing brain inflammation in response to injury.

If so, it could be used to treat concussions and chronic traumatic encephalopathy (CTE), which have plagued the game.

“Here you have a drug that affects a system of receptors that is spread throughout the nervous system,” Wallace said. “We don’t have many drugs like that.”

As the science continues to advance, albeit at a restricted pace, former players are voicing their support.

Hall of Fame quarterback Joe Montana has invested in a cannabis firm. Chris Long, who played defensive end for the Rams, has spoken openly about using marijuana during his 11-year career. Other past stars, such as Terrell Davis and Rob Gronkowski, have become involved with companies that sell CBD-based products. 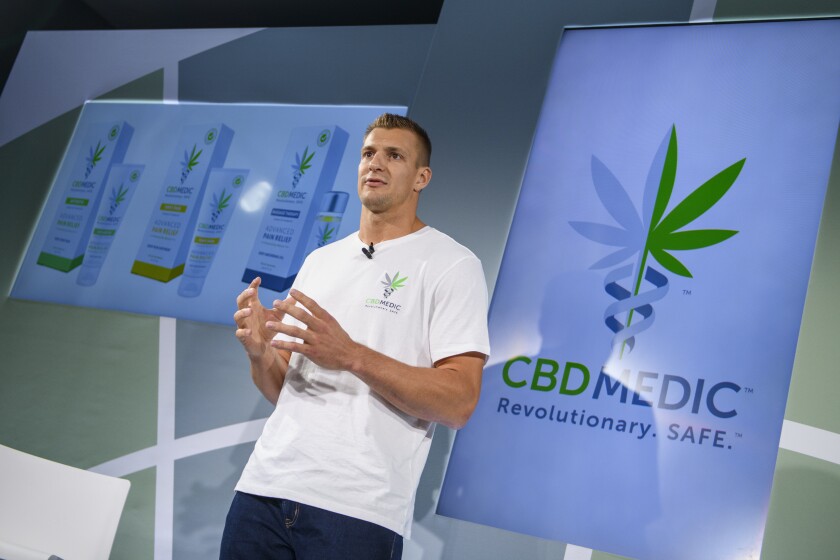 “It would have made a huge difference in my pain management during my career,” Gronkowski said on a company web site after retiring from the New England Patriots in March.

Turley’s advocacy arose from a struggle he faced after leaving the game in 2007. Reduced to walking with a cane, facing bouts of depression and rage, he tried cannabis and saw rapid improvement. He eventually became involved in selling CBD supplements.

“It’s not like some magic potion that hippies in Northern California conjured up,” he said. “The NFL could run one study in training camp and change everything.”

“For the last four years or so, I’ve been in this cycle of injury, pain, rehab, injury, pain, rehab, and it’s been unceasing, unrelenting, both in-season and offseason, and I felt stuck in it,” the 29-year-old Pro Bowler said. “The only way I see out is to no longer play football.”

Luck wasn’t the first standout player to end his career early. The list stretches from Jim Brown and Gale Sayers to Gronkowski and receiver Calvin Johnson.

Though Weddle says he does not use cannabis — “I’ve always played through injury … it’s something I can deal with” — he appreciates the need to address pain management. 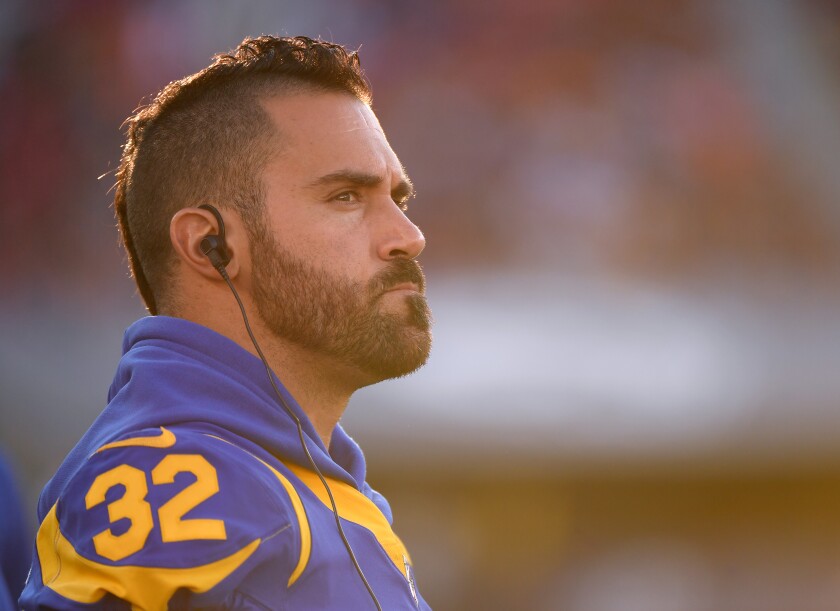 Rams safety Eric Weddle stands on the sideline during a preseason game against the Denver Broncos on Aug. 24.

“There have been studies that say marijuana helps,” he said. “If it helps a guy, fine.”

But the 12-year veteran worries about the effort to change NFL policy; his concerns have nothing to do with medicine or research data.

The issue could factor into negotiations for the next collective bargaining agreement between the league and the players union. Under the current protocol — which mandates only a preseason test for anyone with no prior positive results — Weddle suspects that players who want to use cannabis can do so without getting caught if they are careful.

“The union shouldn’t make concessions on other things to make this legal,” he said. “It’s basically already legal.”

For now, the NFL has convened sessions with team physicians, athletic trainers and medical experts to discuss all aspects of the player-health initiative. The four members of the pain management committee have met once already and are scheduled to reconvene later this month.

“I think it’s really important that we go where the science takes us here,” Sills said last spring. “Not based on personal anecdote or opinion, but what is the medical science.”

Given the league’s history with marijuana policy, advocates have reason to be skeptical. But Turley senses momentum building.

“They only needed to crack the door open on this,” he said. “I think massive things are going to come.”