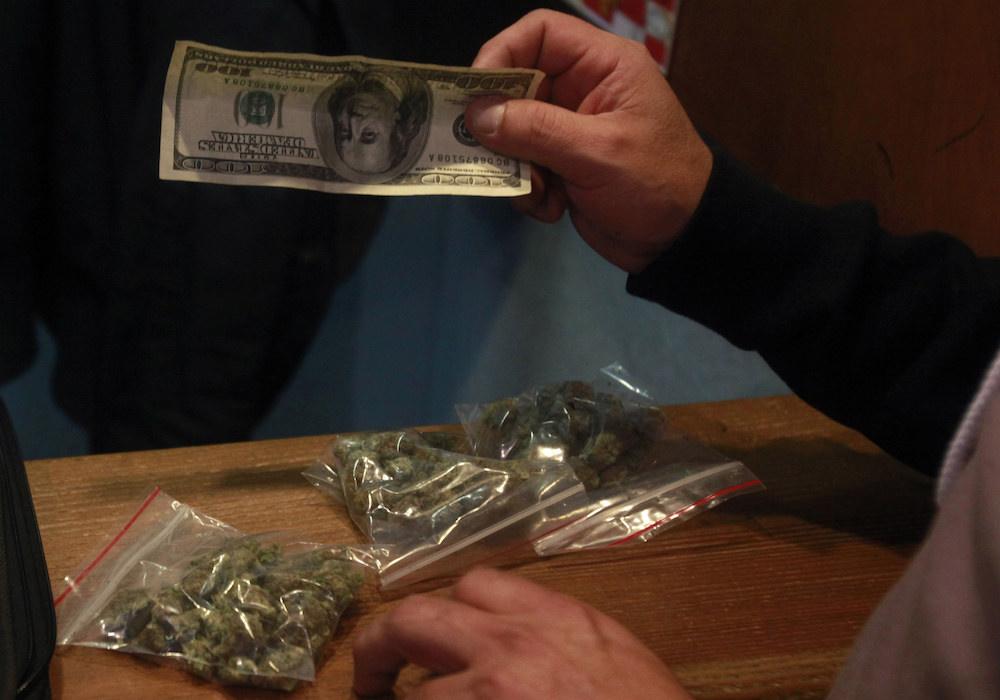 Cannabis is practically legal in the United States: Dozens of states, the District of Columbia, Guam, Puerto Rico, and the U.S. Virgin Islands have approved either medical or recreational cannabis or both. Public-opinion polling shows broad bipartisan support for ending marijuana prohibition. The Food and Drug Administration and the National Institutes of Health have called for new marijuana research. Patient advocates want unimpeded access to doctor-prescribed medical marijuana for everyone from children with epilepsy to veterans with PTSD.

Yet cannabis entrepreneurs court disaster with every transaction in this multibillion-dollar industry. The all-cash environment of the sector puts dispensaries and their employees at great risk for cannabis-related crimes. These concerns were among the key reasons that the Secure and Fair Enforcement (SAFE) Banking Act of 2019 passed the House on Tuesday with overwhelming, veto-proof, bipartisan support, 321 to 103. Every Democrat but one (Terri Sewell of Alabama, a persistently malign force on the Financial Services Committee) was joined by 91 Republicans in voting yes. It was the first time that any marijuana reform bill has passed a chamber of Congress.

House proponents’ decision to tout the bill as a public-safety measure was a sensible tactical move that enabled Republicans who oppose federal legalization of marijuana to support SAFE. Democrats also added some sweeteners for Republicans, including a legislative ban on “Operation Choke Point,” a defunct anti-fraud program cracking down on banks that did business with payday lenders.

But as convincing as the House victory was and as favorable as the bill’s prospects should be in the Senate, the measure’s fate largely hinges on McConnell. And this puts the lie to the notion that impeachment, somehow, is preventing legislative solutions from flourishing on Capitol Hill.

Lawmakers and cannabis businesses, especially smaller ones, want more clarity for an untenable situation posed by the drug’s status as a Schedule I controlled substance. A state-legal entrepreneur still has to haul around sacks of paper currency or use money orders to pay taxes, employees, rent, and other bills, since most banks and credit unions do not want the hassle or the risk of dealing with a business whose product line is a drug that is illegal under federal law.

The all-cash nature of the sector also makes dispensaries a prime target for burglaries and robberies. A 2017 University of Pennsylvania Wharton School report, “Cash, Crime, and Cannabis,” found that a person who robs or breaks into a cannabis dispensary typically gets away with $20,000 to $50,000, compared to about $770 for a convenience store and roughly $7,500 for a bank.

Some marijuana advocates backed a long-shot attempt to persuade House leaders to postpone the SAFE vote, arguing that it helped businesses but did not contain social-equity provisions for minority communities or descheduling language that more comprehensive proposals addressed. But legalizing marijuana and other issues remain more controversial within Congress, while there was broad unanimity on banking and other financial issues affecting legal businesses. Moving on SAFE would also ease the way forward for minority entrepreneurs seeking to enter the industry in states like Illinois that have created social-justice and loan, grant, and other banking programs.

The bill’s prospects are cloudy in the Senate. McConnell, who celebrates himself as the “Grim Reaper” for Democratic legislative priorities, stands in the way of this long-overdue corrective and is unlikely to put the bill to a vote. But with the election season already in full swing, McConnell and his Republican colleagues would undoubtedly get tagged as the principal gravediggers for SAFE in the legislative graveyard that the Senate has become.

The looming impeachment of Donald Trump presents another problem for McConnell. A common Republican talking point since Speaker Pelosi announced the impeachment inquiry is that it would “eat up time and energy” and prevent legislative progress. “The Democrats’ impeachment inquiry will distract Congress from the bipartisan legislative work we should be doing to find solutions and deliver results for the American people,” said Republican Senator Rob Portman of Ohio.

But the day after Pelosi announced the inquiry, her chamber passed a bipartisan bill with 91 Republicans on board. Only Senate Republicans are blocking it. The distraction talking point has proven completely hollow, and this puts more pressure on McConnell to bow to the will of the Senate, where there’s a likely overwhelming majority for SAFE.

There are several other factors that could be brought to bear on McConnell. One is the fate of Kentucky’s industrial hemp industry. Banks are leery of working with hemp producers, even though hemp was taken off Schedule I and legalized at the federal level in 2018, a development that McConnell helped steer. Hemp is still very much linked to marijuana (it contains only a tiny amount of the psychoactive ingredient THC) by many notoriously risk-averse financial institutions. McConnell has been dealing with this issue by seeking hemp-specific guidance from federal financial agencies.

During the House speeches on the bill, Republican Representative Andy Barr of Kentucky noted that “for hemp producers and businesses to fully scale up and take advantage of the descheduling … they need access to financial services.” Barr added all of the advantages that Kentucky has enjoyed from hemp legalization, with 50,000 acres now in production; farmers cultivating hemp for products as varied as dietary supplements, cosmetics, industrial products, and construction materials; and even Toyota, the largest manufacturer in Barr’s district, exploring the use of hemp products for car interiors.

That brings McConnell’s own re-election prospects into play. Hemp, one of the state’s fastest-growing sectors, is big business in Kentucky, and McConnell has been a vocal industry supporter. Failing to remove the remaining strictures that Kentucky hemp producers face could open him up to unwelcome scrutiny in 2020. Hemp farmers are unlikely to be happy with more guidance; after all, the sector is already operating under the Treasury Department’s Financial Crimes Enforcement Network (FinCEN) guidance. SAFE would go a long way to solving their problems.

SAFE is backed by banks, insurers, state treasurers, and attorneys general. They recognize that the cannabis sector is only growing and the current regulatory climate casts a wide net of confusion. The American Bankers Association has called for “greater legal clarity” that only an act of Congress can convey. Shanita Perry, president of the Minority Cannabis Business Association, says that it’s not just cannabis legalization advocates that will be pushing McConnell and the Senate to move on SAFE. “Major industries like banking are saying, hey, you’ve got to do something about this,” she says. “We need you Senator to act on this in the way that House has.”

The business of cannabis has exploded in ways that few people imagined possible when California became the first state to legalize medical marijuana in 1996. Job growth is strong: According to a March report published by Leafly, there are more than 211,000 full-time legal jobs. Sales in both the legal and medical marijuana sectors are projected to exceed $12 billion by the end of the year and approach between $25 billion and $30 billion by 2023. Some projections go as high as $50 billion by 2026. There’s nothing the Senate majority leader can do about that but get on board.