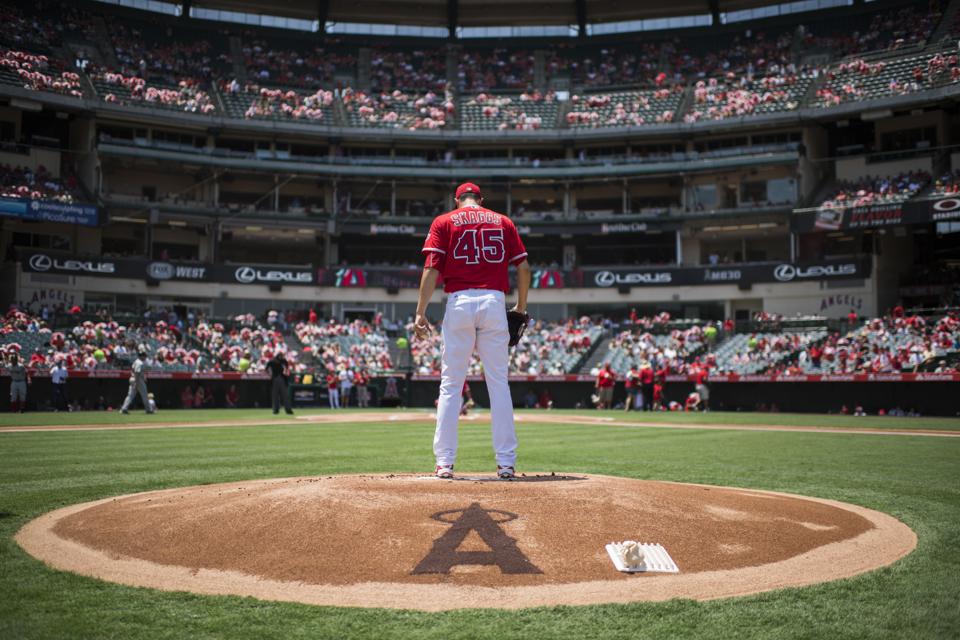 Angels starting pitcher Tyler Skaggs of the Los Angeles Angels of Anaheim died of an accidental … [+] overdose.from opioids. Major League Baseball is examining testing for them, but the possibility of allowing CBD use for pain management is more elusive. (Photo by Matt Brown/Angels Baseball LP/Getty Images)

When Angels starting pitcher Tyler Skaggs was found dead in his hotel room prior to a series with the Texas Rangers in July, it sent a shockwave through the baseball community. Beloved by the Angels, and players around the league, it was beyond painful.

When the autopsy report showed that he had died of a combination of fentanyl, oxycodone and alcohol, his death reached beyond the baseball world and into vast epidemic of opioid deaths in America, adding to the nation’s collective tragedy.

With the 2019 regular season comes to an end, the question as to whether Major League Baseball could address the subject of opioids within the league drug agreement with the players next season, or as part of collective bargaining as part of the next labor deal has surfaced. As part of an exclusive interview with Commissioner Rob Manfred on Wednesday, I asked him about the subject. Not only did we address opioids, but as an extension of pain management, I brought up the topic of Cannabidiol, or as it is more commonly known as CBD that comes from cannabis plants. What transpired was a conversation that shows the complications around the two.

“The situation with not only Tyler Skaggs, but others, has created an environment where I hope we can have more serious conversations about testing for opioids,” Manfred said. “We understand that there are situations where players may use them, but it should only come from a licensed physician; a doctor.”

Manfred’s comments point to the possibility that potential testing would involve seeing whether a player has opioids in their system well past the end of a doctor’s prescription length. That in doing so, players would have the flexibility to use prescribed opioids for pain management but would work to ensure that players are not abusing them. While Manfred did not say, the subject of testing for opioids appears to be a concern for the MLBPA.

As to whether cannabidiol (CBD) could be part of options for pain management that would prevent the potential for addiction, and potential overdose of opioids, the matter becomes more complex. Manfred noted that currently the drug program does not allow for it for a variety of reasons.

Currently MLB’s drug programs that includes minor league players, bans “natural cannabinoids” by category, which includes marijuana, tetrahydrocannabinol (THC) and cannabidiol (CBD). Although the 2018 Farm Bill excluded hemp from the definition of marijuana and cannabinoids in the Controlled Substances Act, the Farm Bill requires that only FDA-approved products are legal. The FDA issued a statement clarifying the matter saying that although CBD is no longer an illegal substance under federal law, the “FDA continues to regulate cannabis products under the Food, Drug, and Cosmetic Act (“FD&C Act”) and Section 351 of the Public Health Service Act. Therefore, any cannabis product marketed with a claim of therapeutic benefit, regardless of whether it is hemp-derived, must be approved by the FDA before it can be sold.” The statement added that “the addition of CBD to food products and dietary supplements is unlawful. However, the FDA recognizes pathways for the lawful introduction of cannabis and cannabis-derived products into the market.”

While the technical issues with the FDA may be overcome through regulation, it bumps into a further problem for the league and players.

There seems no point in the foreseeable future where MLB would remove THC — the chemical component of the cannabis plant that gets one “high” — from the ban list for what the league categorizes as Drug of Abuse. So, the challenge would be to ensure that even if CBD were allowed to be used, could there be the possibility that trace amounts of THC could be present in CBD products that would register a positive drug test? As an example, while the World Anti-Doping Agency (WADA) did exempt CBD from their prohibited list in 2018, they also noted that athletes should be aware that “it is very difficult, if not impossible, to obtain pure CBD extract or oil from the cannabis plant” and “all other cannabinoids, including THC, that are commonly found in CBD extract and oils, remain prohibited.” The USDA noted, a JAMA study published by the American Medical Association in November 2017 that documented the mislabeling of some CBD products. The study found that 69% of the products examined contained different levels of CBD than what was identified on the label. THC was detected in 21% of the products tested, and the THC content in some of those products was enough to produce intoxication or impairment.

While the league did not bring it up, currently they have an agreement with NSF International, a clearinghouse that independently tests, audits, and certifies a variety of products. For MLB, this includes supplements that are designed to prevent players from using products tainted with banned performance-enhancing substances. Just recently, NSF began testing of hemp-based products, such as CBD. So, there is the possibility that should the league and players look to examine CBD use more closely, NSF-certified products would be recommended to prevent failing a drug test.

As noted at the outset, the issue of opioids and CBD in baseball is a complex one. For MLB, it requires negotiations with the players. As the off-season approaches, the league said will be reviewing matters around CBD, and all other aspects of their Drug of Abuse policies, during the off-season. Whether any changes are in place for the 2020 season will likely only be known as we approach Spring Training.