The first cannabis cafe in America is set to open Monday for marijuana-lovers in West Hollywood, California.

Lowell Farms: A Cannabis Cafe is a 220-seat cafe with indoor and outdoor seating where consumers can legally buy pre-rolled joints, edibles, or THC-infused drinks to enjoy over a cup of coffee or tea with friends.

Singer Miley Cyrus, who is openly an avid marijuana smoker, along with DJ Mark Ronson and Comedian Chris Rock are among celebrity investors in the lounge’s parent company that aims to heighten the smoking experience by getting people out of shadowy back alleys and into seats.

’Cannabis consumers have always been relegated to getting their cannabis in a plastic bag while you can go to a dinner party with a beautiful bottle of wine,’ David Elias, co-founder of Los Angeles-based Lowell Herb Co., told Bloomberg. 'People want to smoke a joint with their friends in a cafe like they can over a beer – not in the alley or in their car.’ 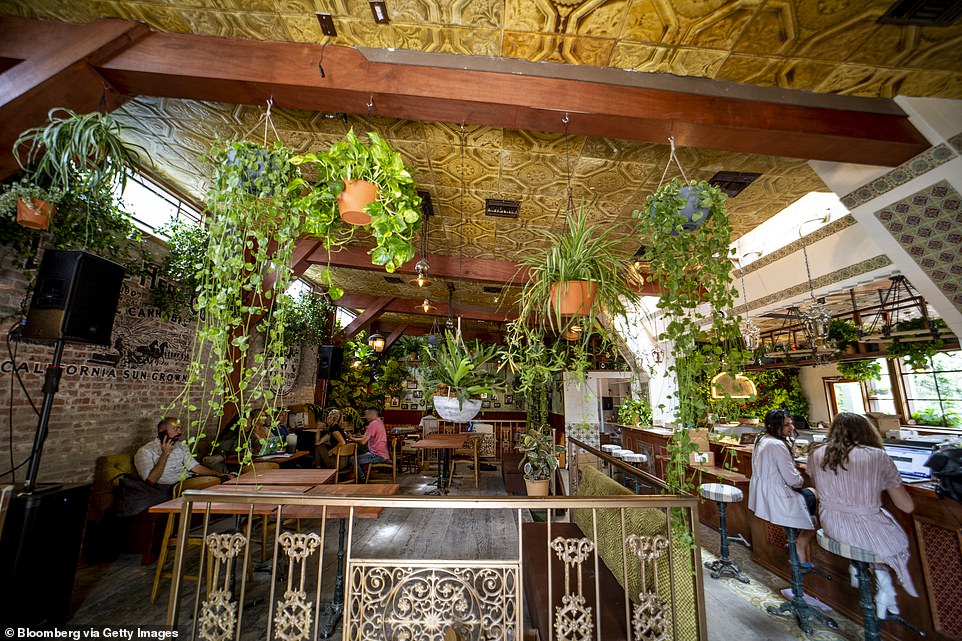 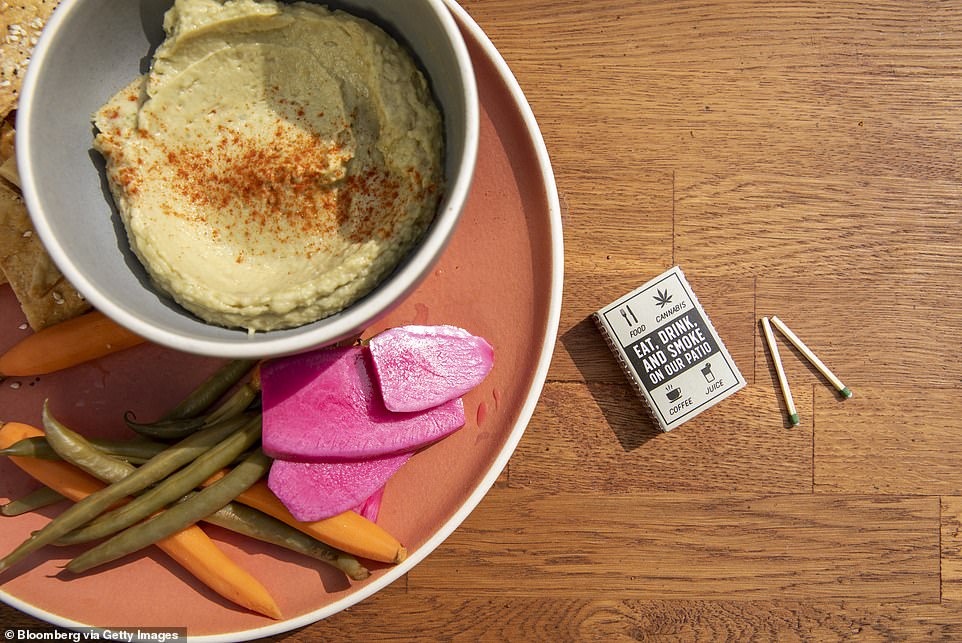 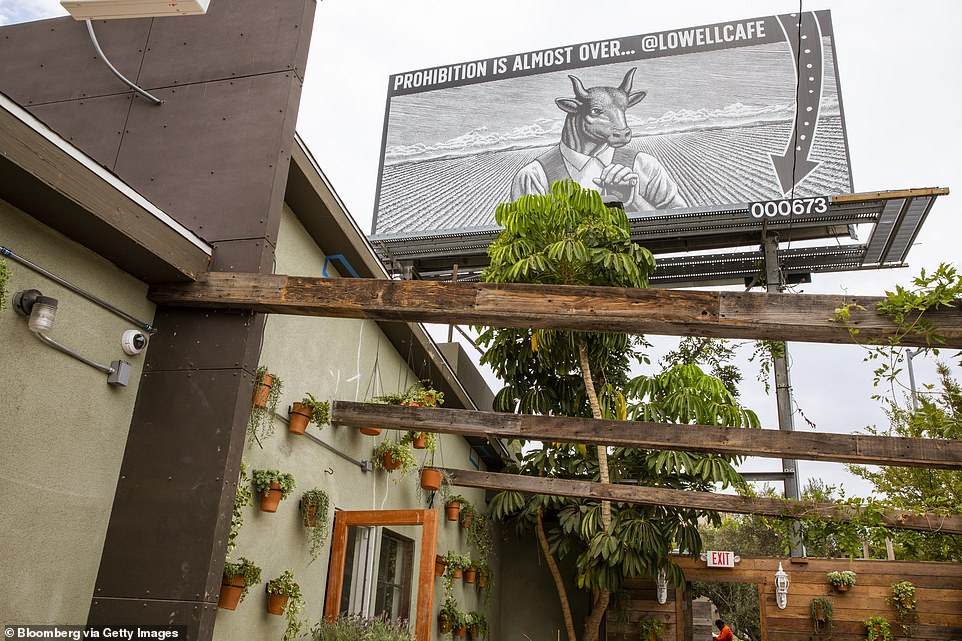 Co-founder Sean Black said the establishment’s opening marked 'the end of prohibition’, and right outside reads a large billboard: 'Prohibition is almost over’ 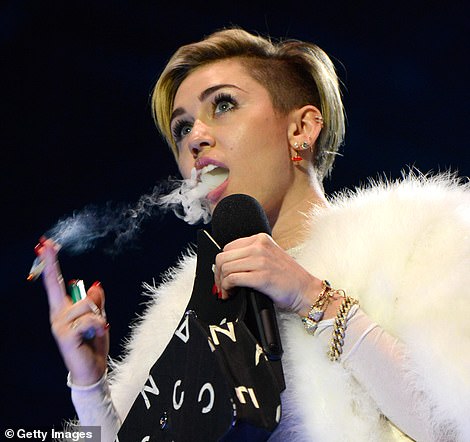 Singer Miley Cyrus, along with DJ Mark Ronson and Comedian Chris Rock are among celebrity investors

The outdoor café includes a THC- and CBD-based menu, along with an area to smoke and vape marijuana or eat edibles.

There is also a non-infused food menu from renowned chef Andrea Drummer, author of Cannabis Cuisine.

Sean Black and David Elias are co-founders of the Los Angeles-based cannabis brand Lowell Herb Co., whose pre-rolled Lowell Smokes are sold at over 300 dispensaries.

Black told the Los Angeles Times that his establishment’s opening marked 'the end of prohibition’.

There’s even a large billboard outside of the cafe that reads: 'Prohibition is almost over’. 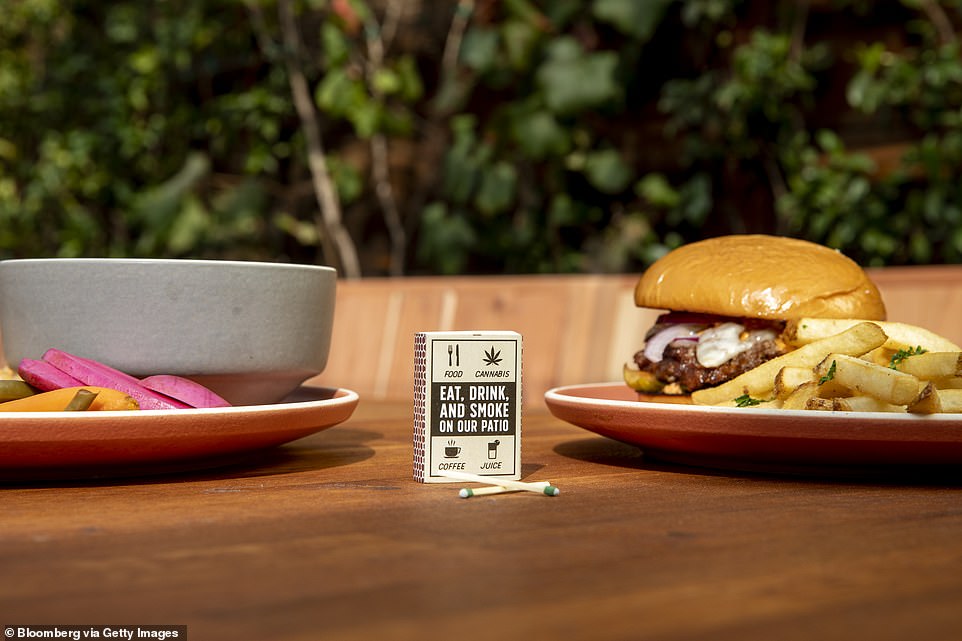 There is also a non-infused food menu from renowned chef Andrea Drummer, author of Cannabis Cuisine 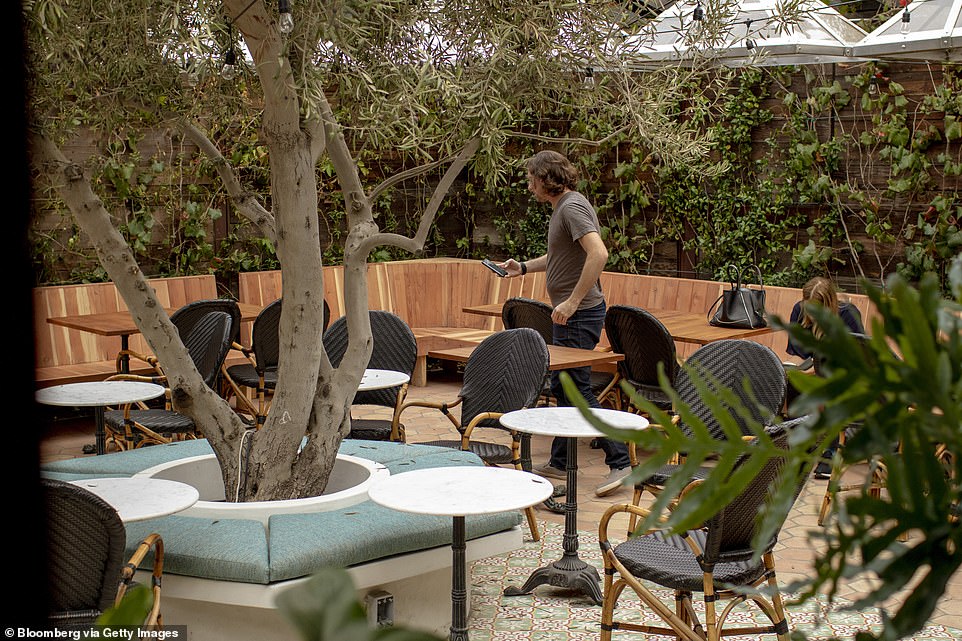 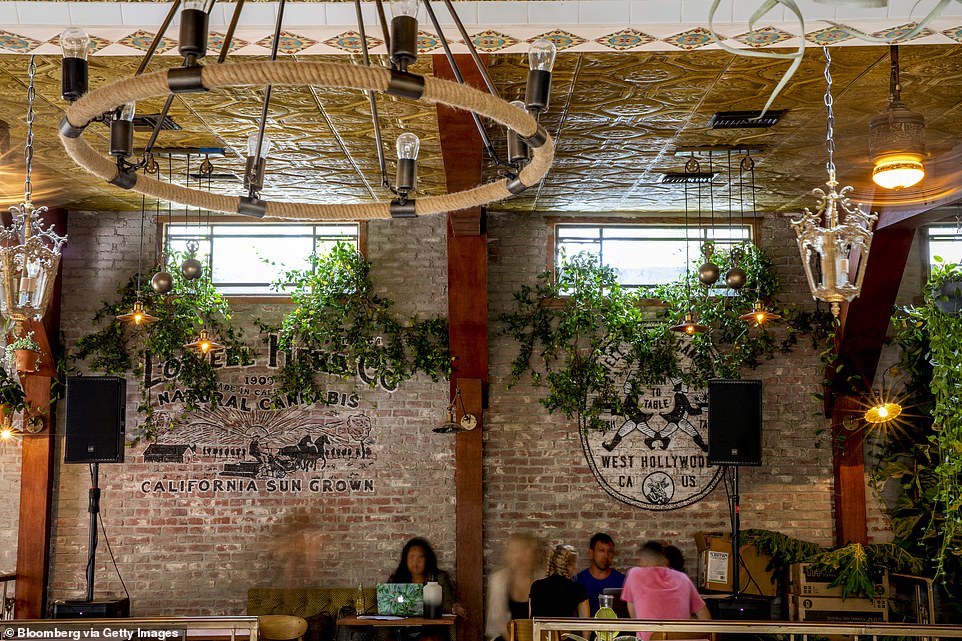 ’People want to smoke a joint with their friends in a cafe like they can over a beer – not in the alley or in their car,’ Lowell Herb Co’s co-founder David Elias said of the cafe 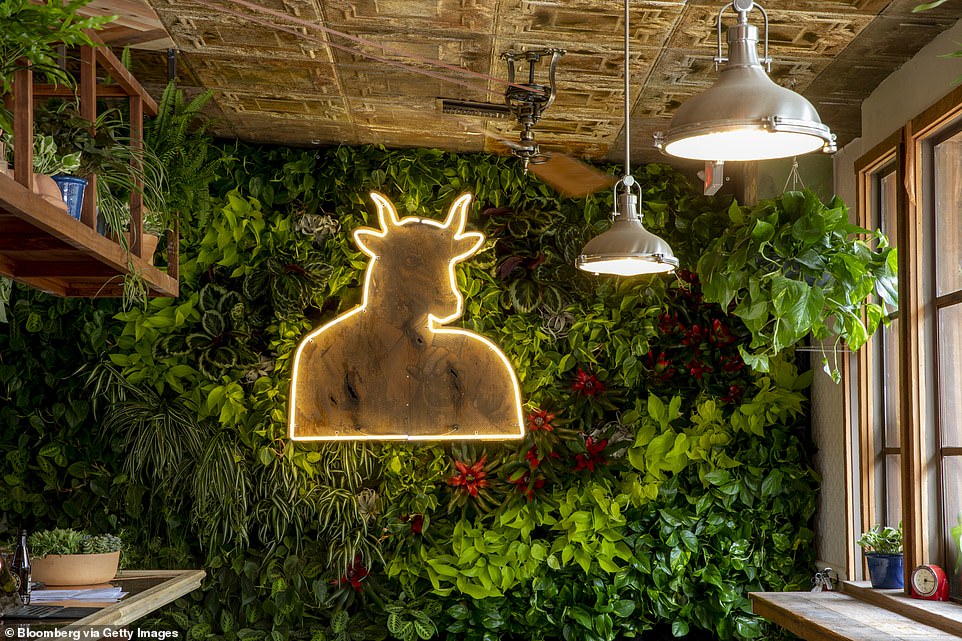 Black said that the café has an air-filtration system, similar to ones uses in casinos, to prevent an issue with smell spilling over into the street 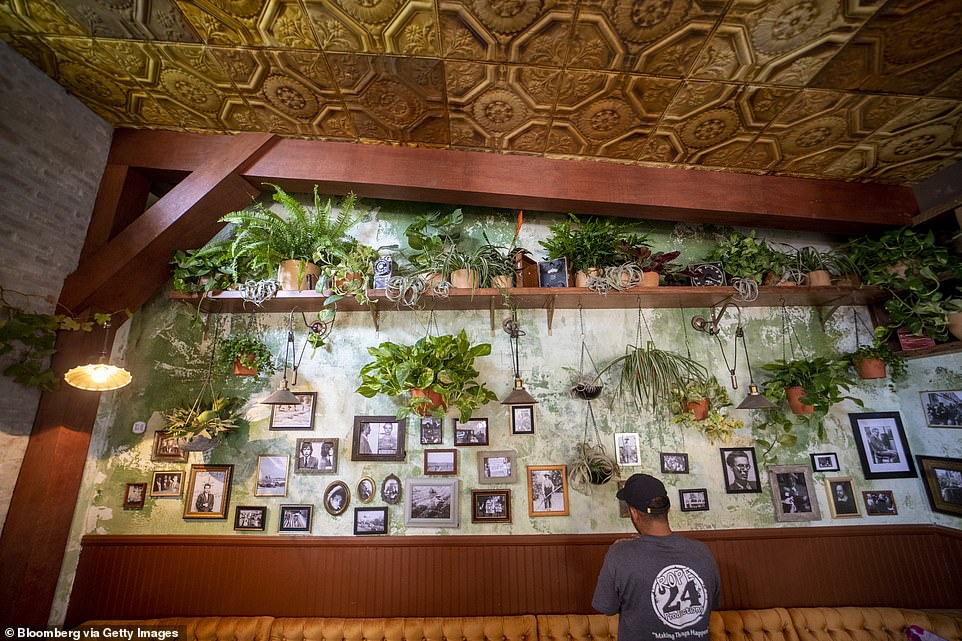 Black said that, ideally, he would like to make marijuana as socially acceptable as alcohol currently is today

THE STATE OF MARIJUANA IN 2019

Currently, recreational marijuana is legal in 11 states and Washington, DC.

Meanwhile, medical marijuana has been legalized in 33 states and DC.

To get medical marijuana, users need a written recommendation from their doctor, while recreational marijuana can be grown or bought at dispensaries.

’This restaurant is a historic moment for the cannabis movement. We want to make sure we do this right. We feel very well-suited as a brand to be doing this,’ he added.

According to Lowell Farms’s proposal, viewed by DailyMail.com, the café is 'unviewable’ from the street, surrounded by a fence.

Alcoholic drinks, however, are not served because California state law prohibits selling and/or consuming pot and alcohol at the same time.

At the time the proposal was approved, not everyone was a fan of the plans for the new café.

Rabbi Denise Eger, who runs the Jewish synagogue Congregation Kol Ami – which is located across the street from where the café will open – attended the meeting in July and said she was worried the smell of pot would waft over into the synagogue during worship services, reported the Times.

An e-mail sent by Eger to the City Council which read, in part,: 'The business is to have outdoor space for smoking pot – and I don’t know why my congregation members and participants have to walk through clouds of marijuana to get to synagogue.’

But Elias tells Bloomberg that he met with the rabbi to address those concerns.

Black said that the café has an air-filtration system, similar to ones uses in casinos, to prevent such a problem from occurring.

A survey from the National Restaurant Association conducted earlier this year found that cannabis was consider the 'hottest food trend’.

Black told the Times that, ideally, he would like to make marijuana as socially acceptable as alcohol currently is today.

’Why can’t you go out to a really nice restaurant or cafe and instead of ordering beer or wine with your meal, you can order cannabis?’ he said.

A 2018 poll from the Pew Research Center found that 62 percent of Americans support legalizing marijuana, double the number from two decades ago in 2000.

Opinions of legalization differ by political party, with 69 percent of Democrats supporting it compared with 75 percent of Independents and just 45 percent of Republicans. 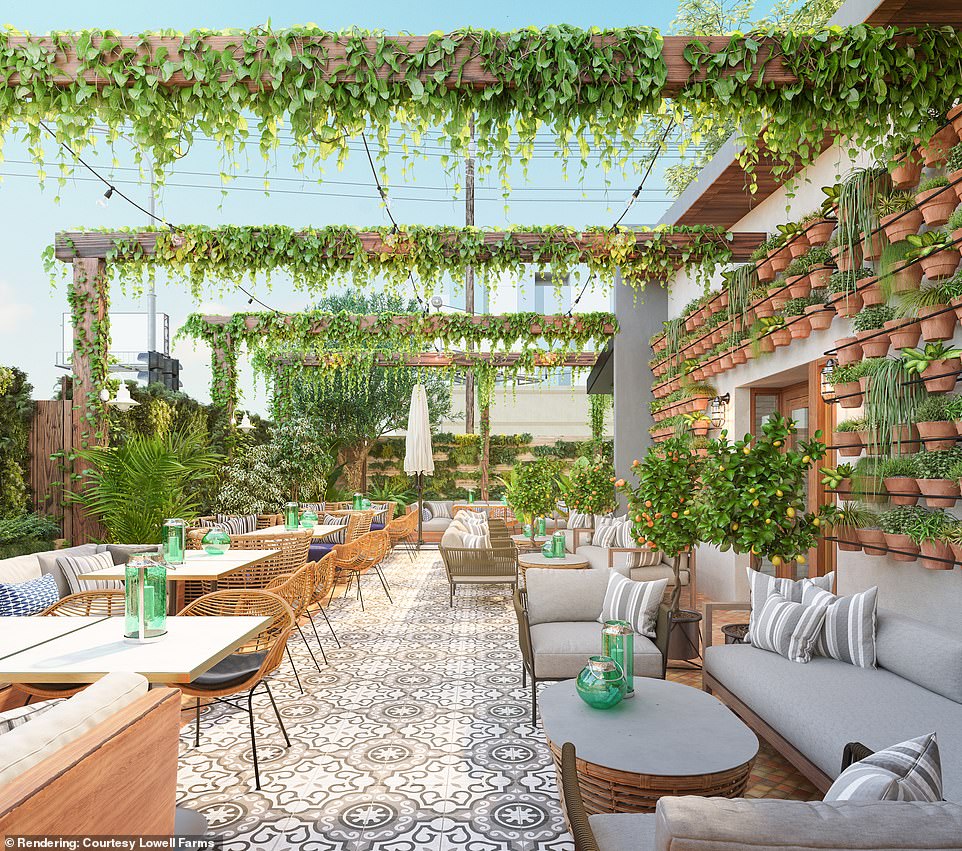 West Hollywood approved plans for the country’s first cannabis café, Lowell Fams: A Cannabis Café in July, which is set to open Monday. Pictured are renderings from the outdoor area 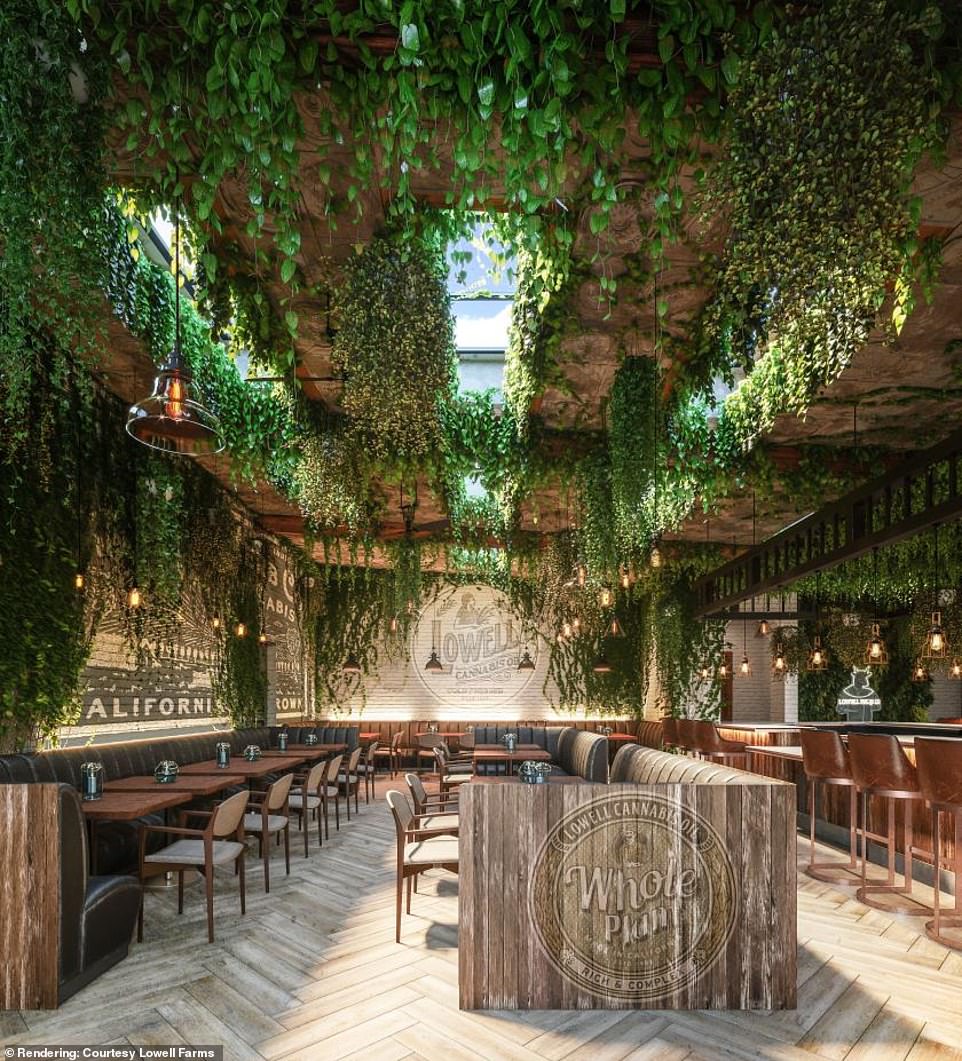 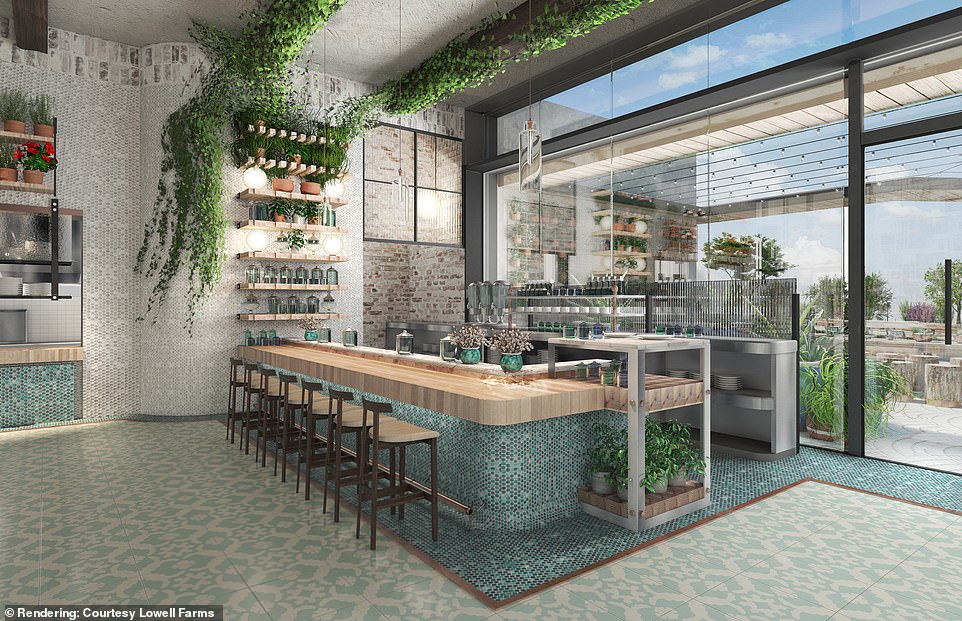 It won’t be allowed to sell booze because California state law prohibits consuming pot and alcohol at the same time. Pictured: The café’s bar