After a fantastic start to 2019, the cannabis sector has been in decline for six months, with the Global Cannabis Stock Index breaching late 2018 lows this past week:

The weakness in stock prices after the first quarter can be attributed to many factors, including continued disappointment with the legalization implementations in the major markets of Canada and California as well as Massachusetts, the CannTrust scandal in Canada, the surprise firing of Canopy Growth’s co-founder and CEO, Bruce Linton, a regulatory slowdown of pending mergers as the Department of Justice requested additional information from several companies that had announced acquisitions, continued regulatory confusion with respect to CBD and a steady supply of stock from founders, early financiers and companies going public or raising additional capital. Despite all of these challenges, the market was still close to unchanged for 2019 until this past week, when it dropped 11.2%.

Driving the market to new lows and levels not seen since the summer of 2017 is the rapidly escalating vaping crisis. While the legal cannabis market has little or no direct exposure to the health concerns that are plaguing the e-cig and illicit cannabis markets, consumers are likely to curtail consumption of vape products. Worse, regulators may overreact and impose temporary bans that impact the legal cannabis market, as was the case last week with Massachusetts.

The reason a slowdown in vaping is negative for the cannabis sector is that it is a very large and rapidly growing segment. We published a summary of trends in several Western markets by BDS Analytics, and it is clear that the category is driving market growth. Additionally, this branded product is higher margin than most dried flower products, so any sort of slowdown will hurt the bottom-line substantially.

This past week, KushCo Holdings, which is a leading supplier of vape cartridges as well as a provider of gases used to extract cannabinoids, took extremely aggressive action to shore up its balance sheet as the crisis worsens. The stock began the month at $3.75, 48% below its 52-week high set in early January, but had plunged to what was then a 52-week low on September 24th at 2.10. On the 26th, the company sold 17.2 million units consisting of shares of stock with $2.25 warrants at a price of $1.75 to institutional investors. The stock ended the week at $1.55, trading to levels not seen since 2016. 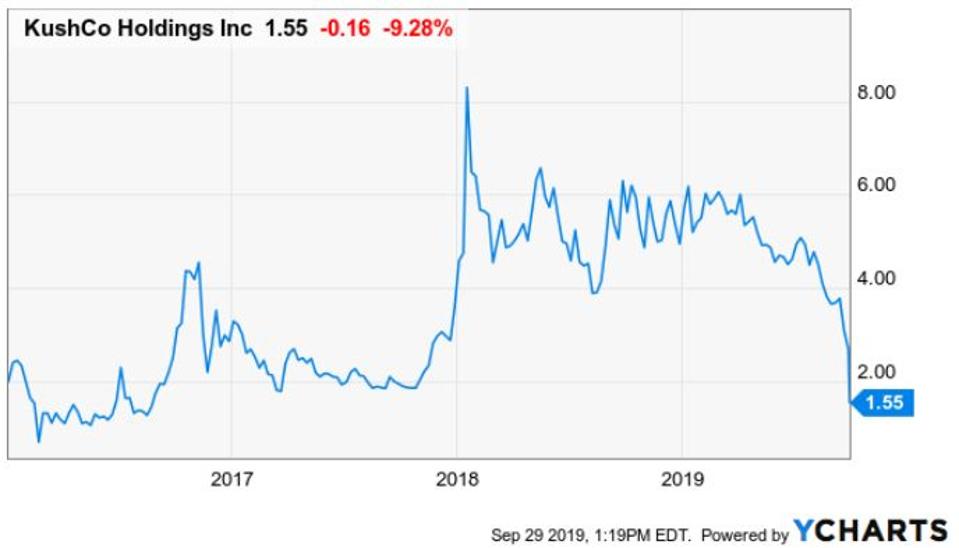 …there is likely going to be a big shake out in light of vape issues and with general cannabis investor sentiment down. We will have a ton of opportunity as competition goes out of business and regulatory barriers are created. Being well capitalized is essential.

The vaping crisis comes at a time when the industry has been moving towards profitability but still falls a bit short. Revenue among leading multi-state operators (MSOs) has soared this year, but most are still operating in the red. The New Cannabis Ventures Public Cannabis Company Revenue & Income Tracker details six MSOs that are generating revenue at a rate in excess of $100 million annually, including Trulieve, Curaleaf, Green Thumb Industries, MedMen, Cresco Labs and Harvest Health and Recreation. With the exception of Trulieve, which I wrote about in December and which is extremely profitable, the group is not yet profitable, though the operating losses vary significantly.

Looking ahead, investors are going to likely scrutinize financials beyond revenue more closely, honing in on profitability and the strength of the balance sheet. Many smaller companies that are underfunded and that haven’t yet scaled are going to struggle to get funding, but even the larger, more established companies could face challenges. Earlier this month, Cresco Labs announced an acquisition and simultaneously priced a $70 million “bought deal” at C$10.00. The stock closed below C$8.00 two weeks later, suggesting that perhaps the underwriters were not able to sell the entire offering, though this isn’t necessarily the case.

The vaping crisis, in my view, is going to be a defining moment for the cannabis industry. In addition to creating a potential capital crunch that could wipe out some operators while creating less competition in the future for those that weather the storm, this could be a very strong driver in the long-run for legalization. There is no stronger argument for regulation than the illicit market selling unsafe, untested products. It is imperative that the industry respond proactively by educating and informing consumers and regulators that the regulated products sold by legal cannabis operators are not the same as those being sold by the illicit market.

In the meantime, though, investors need to brush up on their financial statement reading skills. Those companies that are able to generate profits or minimal losses and that have adequate access to capital will be best positioned for the slowdown in vaping sales or regulatory bans. While same-store sales may suffer, most of the MSOs are expanding within existing markets and in new markets as well, so overall growth should remain robust.

Disclaimer: I mentioned Cresco Labs and KushCo Holdings, which are clients of mine at New Cannabis Ventures, where we provide investor dashboards on their behalf. We disclose all public company clients here. I do not own any stocks mentioned in this article, though I may include them in one or more model portfolios at 420 Investor.