More than 800 Americans have fallen ill and, as of Friday, at least 13 had died from a severe respiratory illness apparently linked to vaping. The mysterious illness left one Illinois teenager with lungs like those of a 70-year old.

For the cannabis industry, the public health scare is its first major crisis and also perhaps an opportunity. Cannabis vape sales reportedly fell 15% the first week of September. But the scare arguably strengthens the argument for a fully legal and regulated market. “It’s a complicated situation,” said Sally Nichols, an executive with California cannabis company Bloom Farms.

The scare is tied to two distinct but easily confused products: THC and nicotine vape cartridges. In markets where marijuana is legal, vape pens are tremendously popular, accounting for roughly a quarter of the market, since they deliver hits of THC far more discreetly than smoking cannabis.

The other product is nicotine vapes, produced by companies including San Francisco-based Juul, which uses “pods” in flavors such as fruit, mango, creme and classic tobacco. These e-cigarettes have conquered American adolescence; more than a third of high school seniors report vaping within the last year. Parents worry vapers will graduate to cigarettes, though nicotine “e-liquid” or “juice” is also seen as a way to help adult cigarette smokers quit. (Puff for puff, nicotine vaping is generally considered far less hazardous than cigarette smoking, or at least was before the current scare.)

The legal markets for both kinds of vapes exist alongside an underground economy of bootleg and counterfeit products, which makes it difficult to track what exactly consumers are sucking into their lungs. While the illness’s exact cause isn’t known, investigators have focused on the chemicals manufacturers mix with THC and/or nicotine to achieve the desired viscosity, or to stretch their supply. Chinese factories that manufacture vape cartridges and related hardware have also attracted attention. Some of these components are used by regulated, as well as illegal, products. 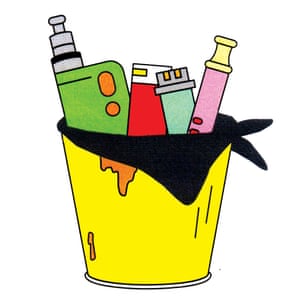 At first, an ingredient called vitamin E acetate oil attracted much of the blame, a convenient scapegoat for many legitimate vape companies since they could truthfully say they didn’t use it. However, as more cases have arisen, not all can be traced to vitamin E.

Doctors are starting to discuss scarier, more complex scenarios such as combinations of chemicals. “Mixing of multiple ingredients with primary compounds and potential contaminants may result in in vitro (or even in vivo) production of new agents that may be toxic,” according to an editorial in the New England Journal of Medicine on 6 September. It said approximately 80% of cases had appeared in patients who vape both nicotine and THC. Most frightening for the cannabis industry is the possibility of THC or CBD adding to the toxicity.

“We’re very alarmed about products containing THC,” Mitch Zeller, director of the Food and Drug Administration’s Center for Tobacco Products, told reporters. The agency was launching a criminal investigation into the vape supply chain, not, he emphasized, vape consumers.

The CDC has urged people not to vape at all – and to avoid THC in particular – until more is known. Though officials remain uncertain about the chemical behind the illness, the CDC’s principal deputy director, Anne Schuchat, told reporters: “Of the patients who reported what products they used, THC-containing products were the most prominent link across patients, with only 16% reporting using only nicotine-containing products.” (Of the millions of Americans who regularly vape THC, only a minuscule fraction have become ill.)

Can legal weed ever beat the black market?

Apparently only one of those who died was known to shop at a licensed cannabis dispensary (in Oregon) and no licensed cannabis manufacturer has been identified by regulators with any of the cases. There seems to be wide agreement that the riskiest behavior is using vapes purchased on the illegal market.

But consumers don’t necessarily know whether they are using a legitimate product or a clever copy. Counterfeiters have created knock-offs of THC vape brands that are legal in California and may distribute them beyond the state. California and Oregon officials recommend that consumers stop all vaping until the illness is better understood. Massachusetts has banned sales of all vape products for four months, provoking criticism that it will force consumers back to riskier illegal products.

Like two other licensed vape companies I contacted, Nichols, of Bloom Farms, was eager to tout Bloom’s transparency and responsible manufacturing processes and call for a crackdown on illegal operators. It is both a fair argument and one that could serve the industry well – unless the crisis leads researchers to discover previously unknown dangers associated with THC.