CBD (or cannabidiol) products, containing a compound found in marijuana, have skyrocketed in popularity and seem to be for sale everywhere, from grocery stores, to coffee shops and gas stations.

CBD itself does not get you high, but advocates say it can help with anything from muscle aches to anxiety. It’s forecast to become a $22 billion industry by 2024.

But without wide federal oversight, there is no way of really knowing what’s inside CBD.

So, we decided to find out.

CBS News partnered with Mile High Labs, in Colorado, to test nine CBD oil samples purchased from around the country. 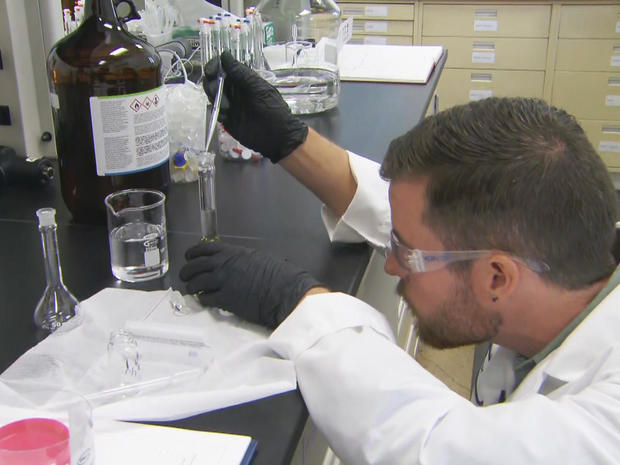 It took two days for senior lab associate Joshua Cogell to test our nine samples, checking for CBD and for THC (the ingredient in marijuana that gives a high), and also for dangerous impurities, like pesticides and heavy metals.

„They are very, yes, things you do not want in your body.”

The CBD craze took off when President Trump signed the Farm Bill last December. The bill allows farmers to legally grow hemp, the source of CBD. It is a member of the marijuana plant family, but it produces only trace amounts of THC. Under the bill, the government allows less than 0.3 percent THC in CBD products.

Here’s what Mile High found in our samples:

But when it came to dosages advertised on the label…watch out!

„That’s really concerning to me,” said Steve Mueller, who founded Mile High Labs in Loveland, Colorado, and is its CEO. He testified at FDA hearings arguing for federal regulation to ensure accuracy in labeling.

„Right now, there’s no one enforcing any of those things,” Mueller said. „It’s sort of up to the companies to do it themselves.”

„So, that really is the Wild West – whatever you say is what ends up on the label, is what people think they’re buying?” asked Petersen.

„Yeah, you can see that from the results here that it is the Wild West,” Mueller said. „And what you get on the shelf is, you don’t really know.”

To find out if what we don’t know can hurt us, Petersen went to the emergency room at U.C. Health University of Colorado Hospital. There he met Dr. Andrew Monte, a toxicologist and emergency medicine physician who has treated people who’ve ingested too much CBD.

„Patients actually can become more somnolent than would be expected,” Dr. Monte said. „So, they could become very sleepy. Patients can also get nausea, vomiting and diarrhea. Those are the most common side effects from oral CBD.”

And here is another „buyer beware”: don’t turn to CBD and turn away from medications your doctor prescribed.

„It seems to me that people have no problem with paying $50 for a very small vial of cannabidiol, yet they don’t wanna pay their $5 copay for a medicine that’s actually been tested in a randomized controlled clinical trial,” Dr. Monte said.

Now, it’s worth mentioning Dr. Monte tells CBS News that cannabinoids do interact with prescription drugs. But because we lack reliable controlled trials, we don’t have enough detail to understand all the interactions.