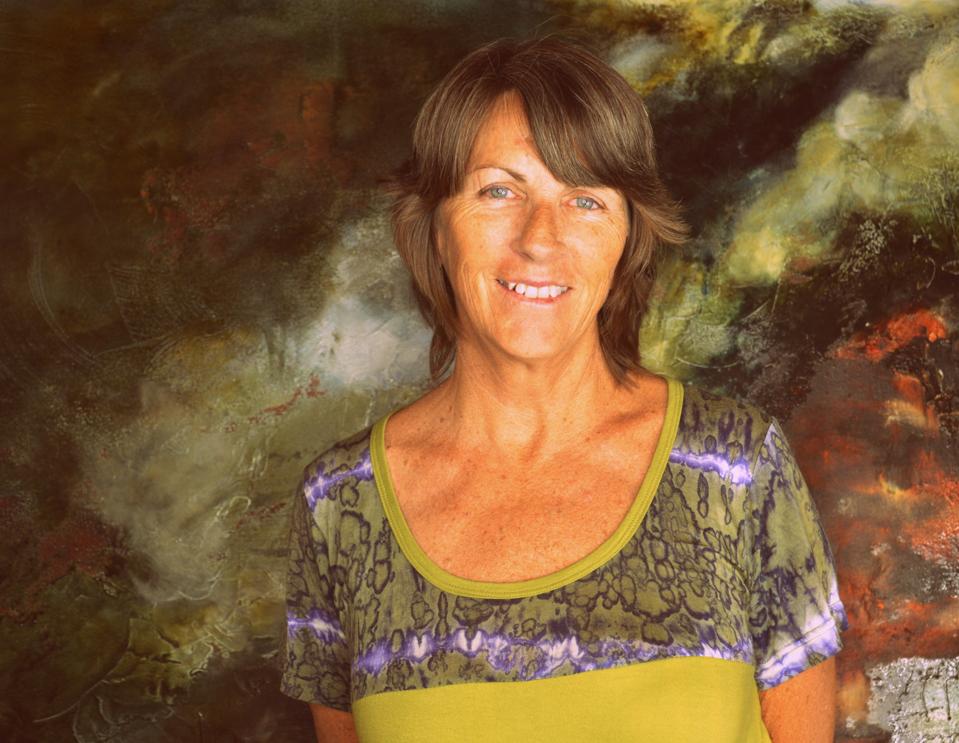 From Mainstream Media to Marijuana

Writer & Producer Sharon Letts’ life is all about the plant

Sharon Letts’ life is all about the plant, but what does that mean? Well, to start with, Sharon Letts is a brilliant published author and journalist. She has worked in television and also is a determined poet. But what I find most intriguing about Sharon is her deep humility. She has faced many, many struggles and survived to live another day. May I please present, a cancer fighter and winner, Ms. Sharon Letts.

Warren Bobrow=WB: Where are you from? 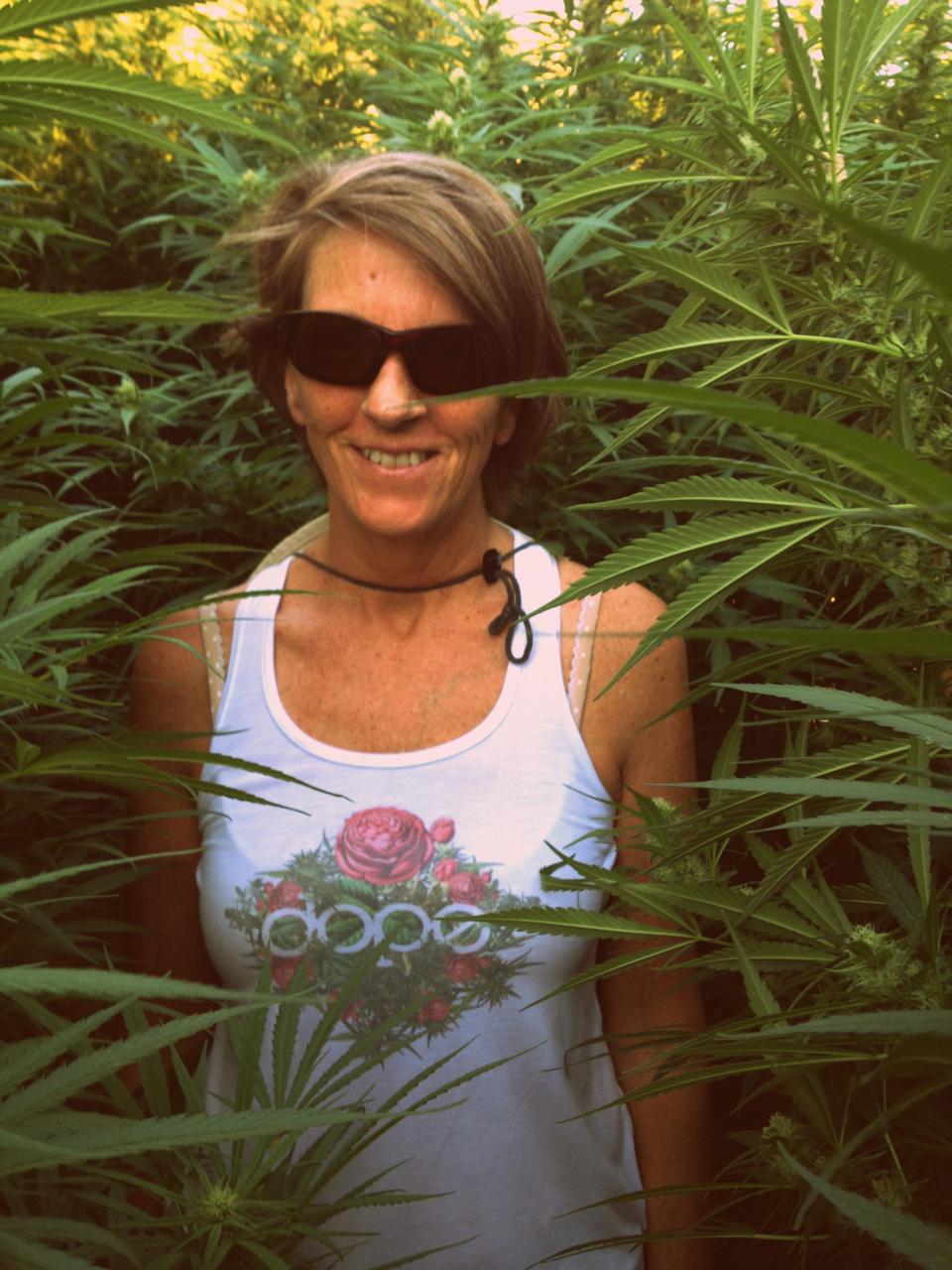 Sharon, Outstanding in her field…Humboldt County, in Northern California: Field Of Blue Dream

Sharon Letts=SL: I grew up in Redondo Beach in Southern California, a suburb of Los Angeles; and graduated from Redondo Union High School in 1977.

WB: What did you originally want to be when you were a younger person?

SL: I was first published as a poet at 19, and sold my artwork in shops and street fairs, but that lifestyle wasn’t sustainable. At 24, I bought a truck and started my own gardening business, designing, planting and maintaining flower beds in Southern California. 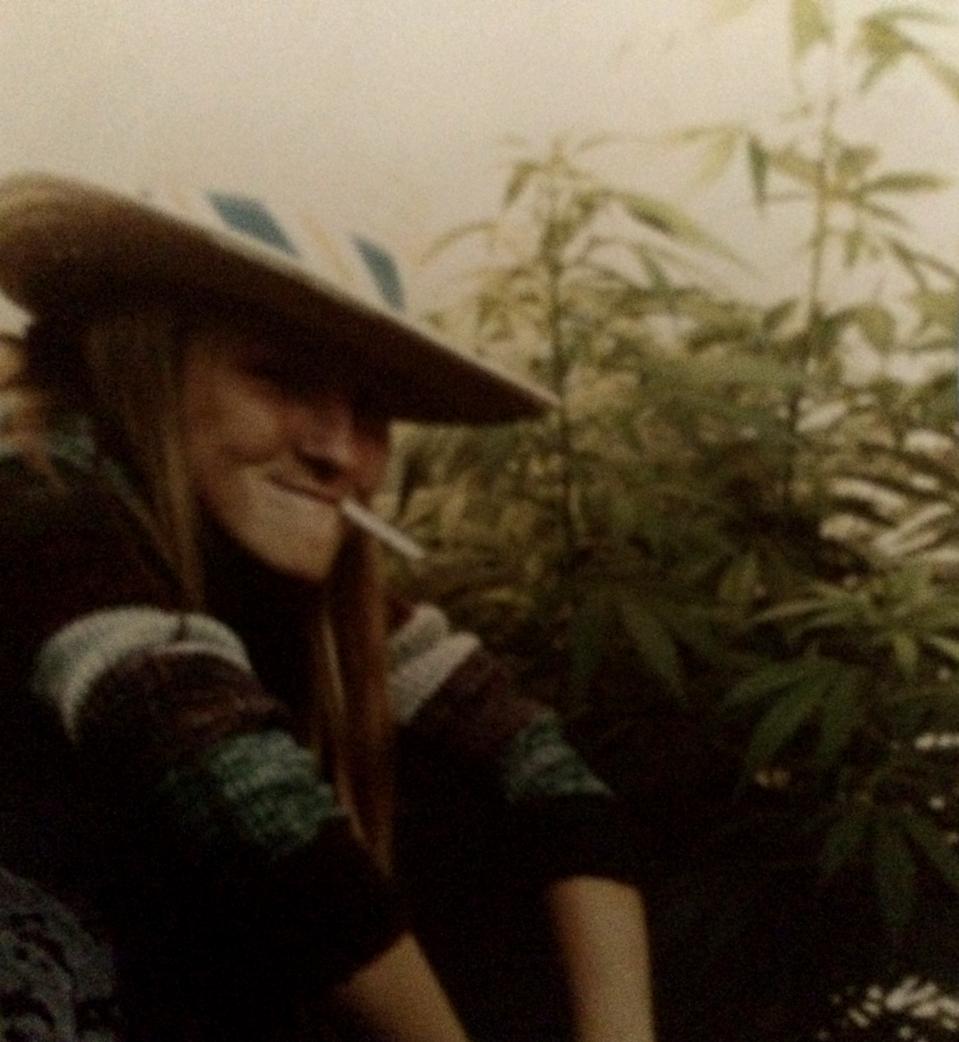 In 1998 a local TV programing manager asked me to host a visiting gardening show, In and Out of the Garden, and I became a producer; self-cycling the show each week to four counties in Southern California for three years. That parlayed into Executive Producing my own travel series for PBS in California, Off the Beaten Path – which led me to work as a field and segment producer in Los Angeles for national television. I was brought up to Humboldt County in Northern California from Los Angeles to produce a news show and eventually became the lead Features Writer for the Times Standard in Eureka.

WB: How did you achieve the honor of working with our plant?

SL: My relationship with the plant began in 1975 at 16, when I took a couple of hits from a joint for the first time on the way to high school. I hadn’t been considered very bright, challenged by an undiagnosed Processing Disorder and ADD, but that was the first day in school I could focus. My work in cannabis began after I was brought up to Humboldt County from Los Angeles. While working in media in the cannabis capital of the world I presented with breast cancer, Lobular carcinoma – a mass that typically leads to a partial mastectomy, chemotherapy, and often follow-up radiation.

Only 10 to 15 percent of women are diagnosed with this type of cancer in the U.S. It’s a distinct, white spider web-type mass, and it showed up in both my mammogram and the follow-up Ultrasound.

Longtime Southern Humboldt cannabis farmer and remedy maker Pearl Moon of The Bud Sisters got wind I had cancer, and brought me a jar of dark, sticky cannabis oil, telling me to take small bits of it orally with a toothpick, then increase the dose – this gets you used to the high THC, the compound said to kill cancer cells and create hemostasis in the body.

Pearl made no promises, though I didn’t really believe weed could cure cancer, and asked her, “If this works, why don’t I know about it?” Good question. In mainstream media, we aren’t allowed to report on stories of healing with “Marijuana.” Even in Humboldt County, when I went through my cancer treatment, the only mention of cannabis was in the crime section of the paper.

The first night I took the oil, I didn’t need my sleeping pill, the next day I didn’t need the painkiller needed for a challenged knee. In two and a half weeks, upwards of ten prescription medications and supplements needed for Thyroid Disease and hormonal issues with menopause were no longer necessary.

In two and a half months, the cancer was gone with no surgery, chemotherapy or radiation. My full cancer story is on my website, but I’m now part of a 30 year study by the American Cancer Society on prevention. Its Senior Scientific Director, Alpa Patel, wrote me herself, thanking me for my participation, promising me more in depth cannabis questions on future surveys. 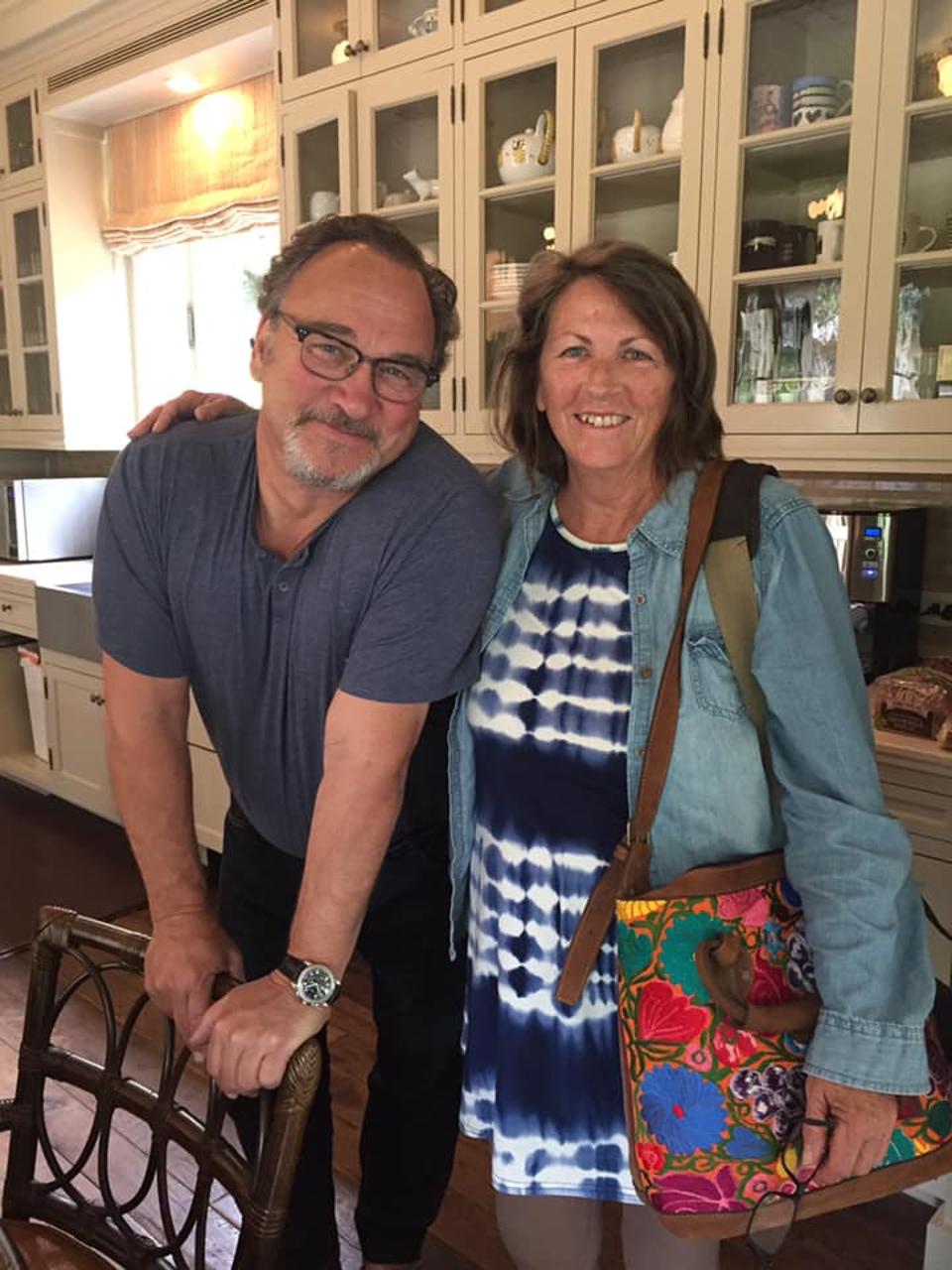 This month (October, 2019) I’m celebrating my seventh year cancer and pharmaceutical-free, and have been taking a maintenance dose of oil every night, ever since. I like to say, cannabis was my gateway drug to other beneficial plants, as it’s led me back into garden in a very profound way – changing my life and career forever.

WB: How did you decide you wanted to be a journalist in cannabis?

SL: It wasn’t a choice, it was a calling – I was led here. It was as if a powerful hand took this woman with a voice in media from Los Angeles, dropped her in Humboldt County and gave her cancer. It’s been a double-edged sword to write in the cannabis space. Yes, I’ve helped thousands with my words, but I’m only preaching to the choir writing for cannabis publications. Until the plant is de-scheduled and given the respect it deserves as a superfood by the U.S. Government, I can’t cross back over into mainstream media with my patient profiles – which have become the main focus of my work. The stories I write are called “anecdotal,” and just are not believed outside the cannabis community.

When I was in mainstream media I was respected and given a living wage. In the cannabis space, I’m doubted right out the gate by those who think they know about “Marijuana.” It really shows the power of how a decade’s long drug war with an excessive amount of propaganda can mislead the masses. I like to say, “Be careful what you believe about cannabis, because much of what you think you know has been conveyed via misinformation.”

WB: Tell me about your path in cannabis. What is your six-month plan? Twelve months? What obstacles stand in your way? How do you hope to remove these obstacles?

SL: The plant has brought me back to television full circle, and I’m actively developing and shopping intelligent magazine, documentary, and scripted concepts surrounding the plant. I’ve developed and pitched mainstream shows in the past, but shopping cannabis shows is a whole other skill set, as executives must be educated on cannabis as remedy and its acceptance globally before we even get to the show concept. There are no stoner-type shows on my list, but some television executives refer to cannabis shows as “drug shows,” so the hurdles begin even before a meeting is set-up.

One ongoing series I write for High Times, “What’s in Your Stash?” I’ve developed as a reality show, with the sizzle in post-production now. When you peek into someone’s stash, you are looking at how they medicate. It’s my sneaky way of inserting a patient profile into a culture piece – which is where most of the cannabis features I write go, no matter if they are about treating cancer or how to smoke weed from an apple.

Characters from my eBooks Cannaopolis and Humboldt Stories (2016 Tokey Awards), have been written into a pilot for television series, Cannaopolis, also being shopped now. Cannaopolis is a very personal story for me, as it’s based on my time in Humboldt County, and tells the story of third and fourth generation small cannabis farmers and caregivers in real time, now facing legalization and the end of life as they know it.

WB: What is your kitchen apothecary about? How do you work with your recipes?

SL: It’s wonderful to go to dispensaries – like a kid in a candy shop – but, it’s not affordable for most, and why I taught myself how to make remedies at home. I call it Kitchen Apothecary as apothecary was the way we healed with plant-based formulations prior to the late 1930s.

Everything in my kitchen in infused – my cooking oils, vinegars, butter, and honey. Even my alcohol is infused, though I use a cold process, leaving the THC un-activated. I’ve also learned how to make the strong cannabis oil in a rice cooker – which in cooking terms is merely a simple alcohol reduction. But, I don’t cook with full strength THC, I microdose. For instance, if a recipe calls for one cup, I’ll use a quarter to half the infused oil with non-infused oils.

Keeping beneficial plants in my system daily is key to keeping the cancer at bay – creating homeostasis within the body – or, a place where cancer will not thrive. But, I’m not perfect. I like sweets and hot dogs.

It’s common in the cannabis community for people to encourage you change your diet and think happy thoughts, but that wasn’t the case when I went through treatment. I was still eating junk food for comfort, as my (now) ex began cheating on me through my treatment. But, the plant worked anyway. The cancer went away. It could come back worse tomorrow or I could get hit by a truck. All I know is, for the past seven years, at 60, I’m in better health than when I was on numerous pharmaceuticals. No denying it.

WB: Who is your mentor? How have they helped you thrive in a competitive marketplace?

SL: As a writer in the cannabis space, I haven’t really had a mentor, though I’ve helped many others connect over the years. There are writers I admire – John Steinbeck, Dave Eggers, Aaron Sorkin. I follow Curt Robbins’ work on terpenes and cannabinoids; and read Tom Angell’s Marijuana Moment every morning. I just wrote a profile on Uwe Blesching, author of The Marijuana Health Index – which is a brilliant combination of science and mindfulness. Of course, I adore the author of this piece – Warren has been a kindred spirit to me. Jane West was there for me at a time of quiet desperation, but I can’t say any more than that. Samantha Hitchman, my editor at Weed World UK has accepted my work for eight solid years, and I consider her a friend across the pond.

WB: What is your passion?

SL: I became a writer and producer through a journey that was not of my making, but I chose to be a gardener at a young age – that’s my passion. I’d rather be outside than anywhere. My path as a gardener led me to television, to Humboldt, and to a better understanding of cannabis. Educating the masses on plants, our relationship to them, and how they can keep us well has become my life’s work. 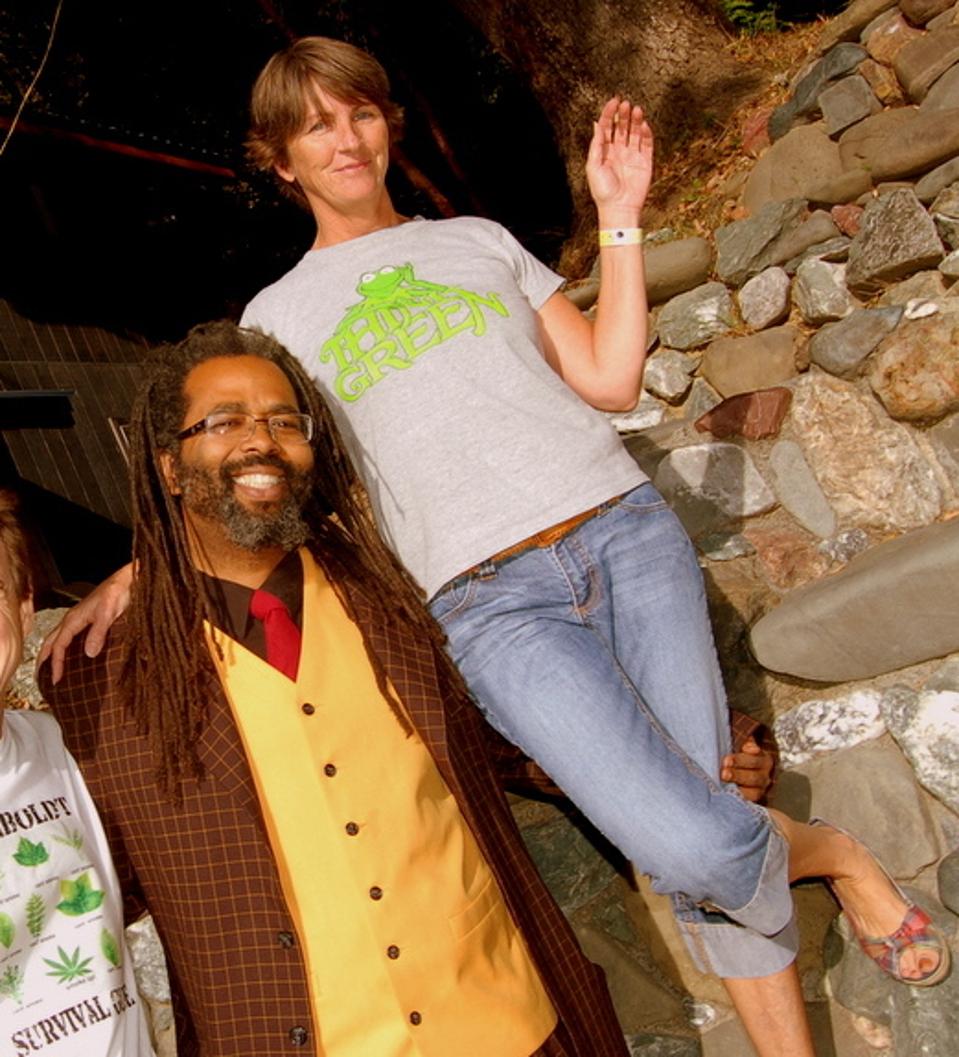 Sharon and Ngaio Bealum, of Cooking on High, Netflix