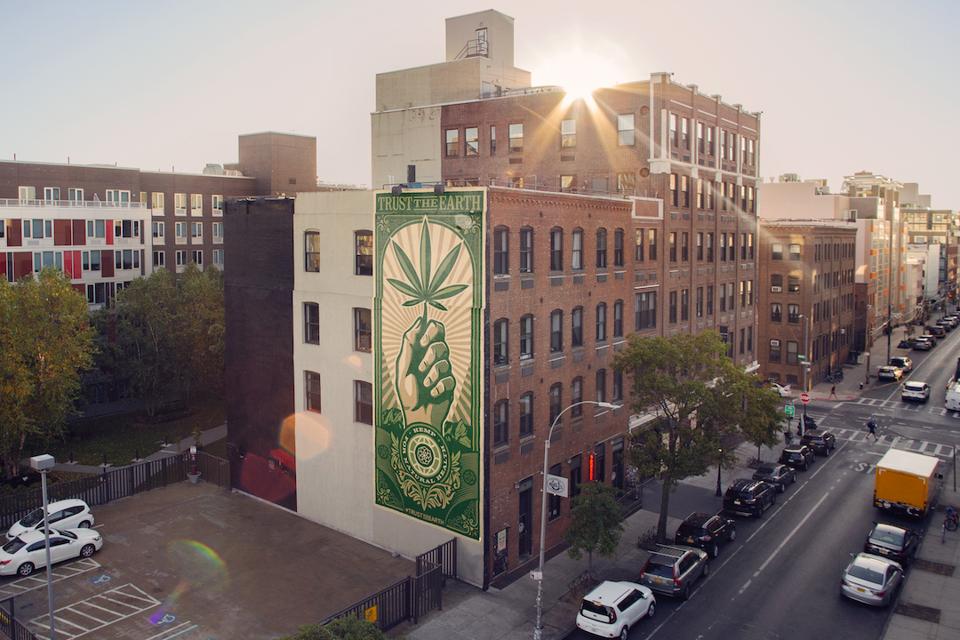 Charlotte’s Web, the industry’s pioneering gold standard brand and leaders for hemp-based CBD, has launched its new Trust the Earth Campaign with a Studio Number One mural in Williamsburg, Brooklyn.

Before the CBD craze swept the country, the Stanley Brothers cultivated Charlotte’s Web in 2011, a proprietary, high-cannabidiol, low-THC strain of cannabis that kick-started the entire plant-based wellness industry. Officially founded in 2014, the eponymous Colorado-based company has maintained its position as a market leader and after five years of grassroots growth, is releasing its first nationwide campaign to stand out among an increasingly cluttered and complex space.

Charlotte’s Web tapped Studio Number One (SNO) founded by legendary artist Shepard Fairey to create its “Trust The Earth” campaign. The multi-city art installation is conveyed through a super-sized graphic representation of a hand holding a cannabis stalk and the call-to-action „Trust the Earth.” 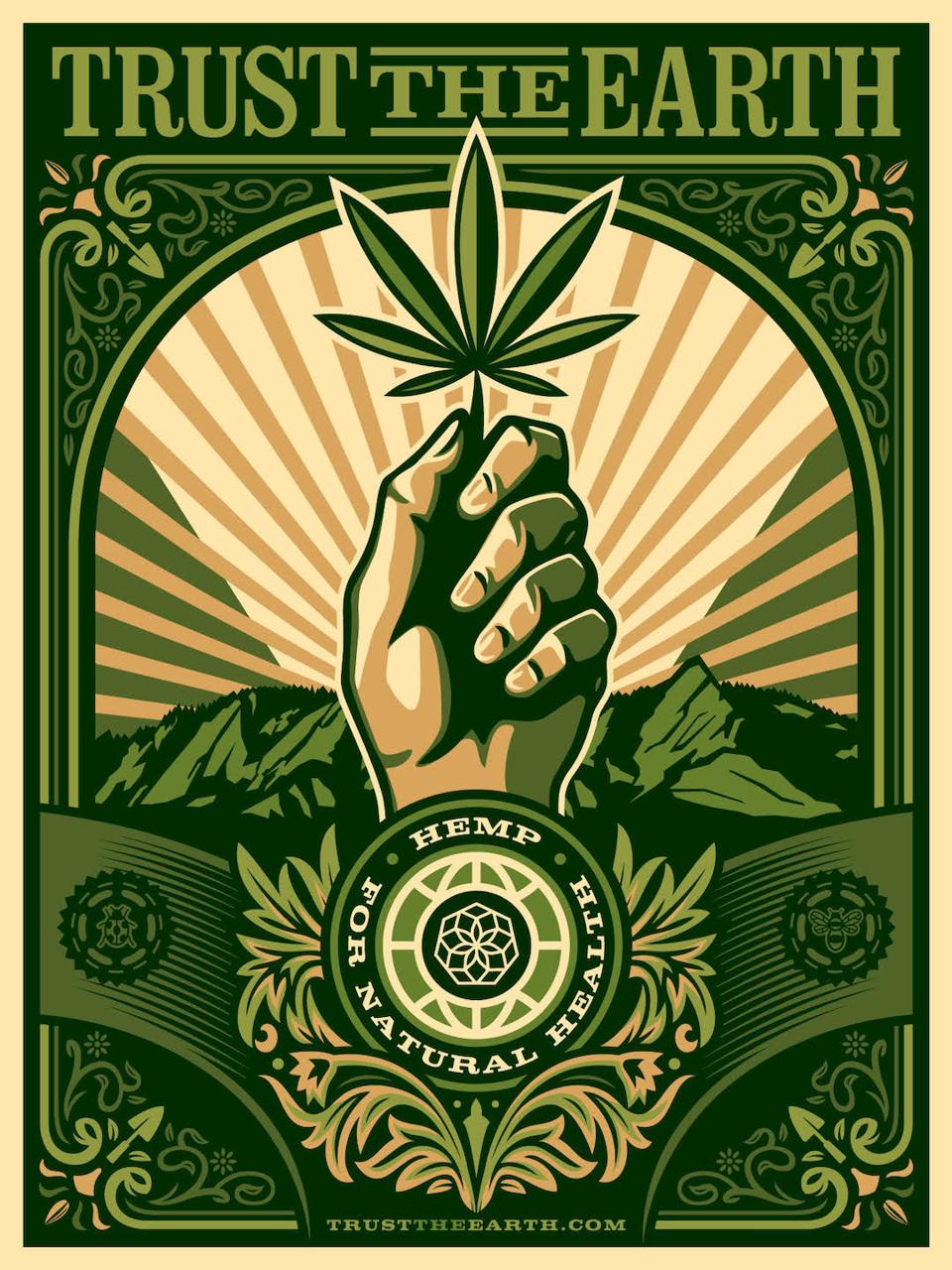 The multi-city art installation is conveyed through a super-sized graphic representation of a hand holding a cannabis stalk and the call-to-action „Trust the Earth.”

„My creative team at SNO focuses on projects that have meaning and create positive change in the world,” said Shepard Fairey, creative director and co-founder of Studio Number One via email. „Charlotte’s Web was a great organization to align with, as they are making advancements doing good by generating real health benefits with their products. My goal as an artist is to create art with a message, and I’m proud of my team for using this opportunity to do the same for Charlotte’s Web, a brand that can take a stand.”

Named in honor of five-year-old Charlotte Figi, who suffered from serious seizures, Charlotte’s Web gained national attention when Dr. Sanjay Gupta featured her effective use of its CBD oil on CNN in 2013 (a follow-up is included in his just-aired “Weed 5”). Now 11, Figi is 99.9% seizure-free according to the Stanley Brothers.

Launching in New York City, the mural will appear on the corner of North 11th Street and Wythe Avenue in the heart of Williamsburg, Brooklyn. Williamsburg was chosen for the debut for its reputation as a forward-thinking, pioneering community—much like Charlotte’s Web and SNO. The art projection campaign will also roll out in the following U.S. cities: Washington D.C., Chicago, and Los Angeles. Fake Love, a New York Times-owned, award-winning experiential design agency provided additional support for the activations.

“Trust The Earth” aims to ask and empower Americans to educate themselves about access to natural health while championing the right to choose quality options. The community-minded campaign platform is also available online at trusttheearth.com (#trustheearth).

Ahead of its unveiling on October 3, 2019, I went behind the design with Charlotte’s Web co-founder and chairman of the board Joel Stanley. 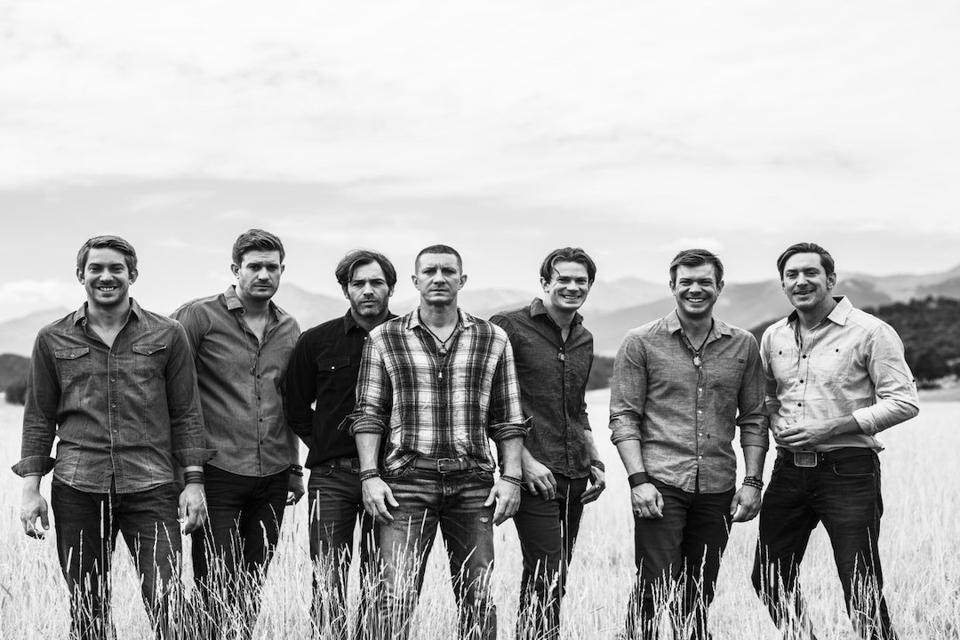 Katie Shapiro: How did you come together with Shepard Fairey and Studio Number One?

Joel Stanley: Almost nothing about our journey in CBD, hemp, and cannabis has been traditional. Our roadblocks have been opportunities to be creative, innovate and see lives change. Charlotte’s Web started as a mission and it grew through word-of-mouth and people sharing their positive experiences around hemp CBD. The challenges of traditional communication for hemp have only made us better and lean into our most authentic voice. We don’t market, we love asking people to join our community. We have long admired the work of Shepard Fairey and the group of talented artists at Studio Number One, and the work they have created to push social messages and icons of justice that billions of people around the world have rallied around. We reached out to them and told them about our story, our community, and the mission we’re on to democratize quality hemp for everyone. We immediately connected with their incredible team and were honored that they chose to interpret our mission in such a powerful way.

Shapiro: How many design iterations did CW go through?

Stanley: The process was exciting because of the way Studio Number One is set up. The studio taps incredibly talented artists that represent many different styles with Shepard serving as the Creative Director. This was really appealing because it allowed the teams to iterate on various visual themes until we landed on something that felt emblematic and unique to our mission and voice. We went through about six options and five iterations, and every step was more revealing than the previous. Our “Trust The Earth” call-to-action became one with the art.  This process was particularly meaningful for my brothers and I because we’re not sign-spinners and much like Studio Number One, we believe in the collective, in community. Nothing is more powerful than a group of people caring for one another, and art is about community. The collective effort and power in this art resonates what it means for us all to strive for wellness through nature, to have that right, and to have quality options. When you employ art as a vehicle for storytelling, it’s textural, it visceral, and it connects us all and catalyzes change. 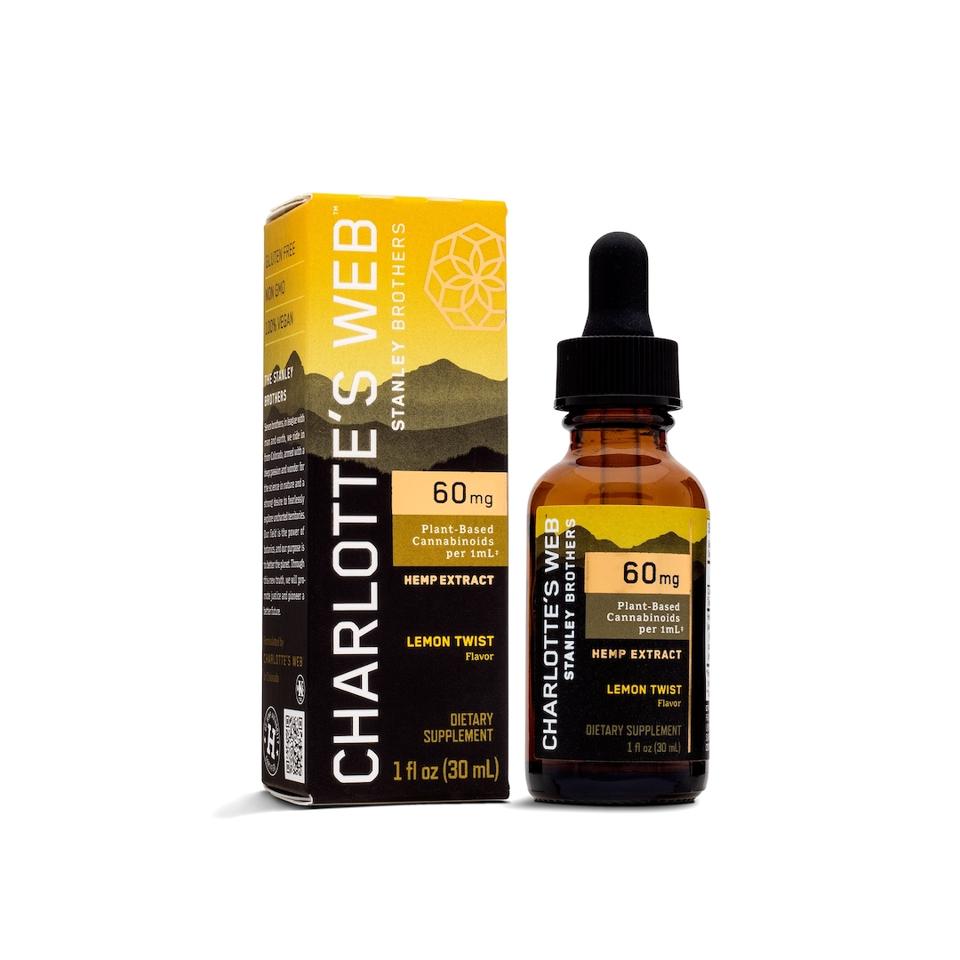 Shapiro: As the pioneer of the CBD movement, what is your perspective on how the industry has taken shape in the past five years?

Stanley: Over the last five years, we’ve seen an incredible amount of positive forward movement, and we are looking forward to its further evolution. When we were starting out, we made a choice to put our resources into quality rather than marketing, knowing that would influence the shaping of the company and hopefully, the industry. We are looking forward to seeing quality standards set throughout the entire industry.

Shapiro: What is the biggest triumph you’ve seen in the industry so far?

Stanley: One of the biggest industry triumphs has been the 2018 Farm Bill and we’re anticipating far more research into the category, and into hemp in general, which is very exciting. Humanity barely knows how valuable hemp can be, and as long it was considered a controlled substance, research institutions were denied the ability to study this incredible plant. Research will inform the future uses of hemp for health and wellness, and also, agricultural and manufacturing practices.

Shapiro: What do you think is still missing?

Stanley: We’d like to see more transparency for agricultural practices and support the industry to navigate towards organic practices to the benefit of human health and to that of the planet. To that end, over 50 percent of Charlotte’s Web cultivation fields are in process and are expected to be certified organic by USDA-recognized agencies for the 2019 harvest. The remaining fields are in transition to organic certification. We don’t employ the use chemical pesticides or herbicides on our plants and during manufacturing, we perform a full battery of tests including microbiological contamination, heavy metals, potency, and residual solvents. This process also includes a 60+ panel of testing for pesticides and herbicides, including glyphosate. For consumers, Charlotte’s Web offers Certificate of Analysis for cannabinoid potency that supports our label information. Lastly, Charlotte’s Web does not use GMO in any of its ingredients or extraction processes. All of this is expertly third-party verified for Good Manufacturing Practices.

Shapiro: What is your hope for the new campaign to ultimately achieve?

Stanley: We hope people will join our community, educate themselves about the benefits of hemp, and experience a better version of themselves through the power of nature. Hemp is proving to us that fear-based prohibitions have only served to block humanity from valuable tools existing in nature. We want to help people remember that our bodies produce compounds like those found in hemp, and we are related to nature. It’s not something separate from us, and in that, we should have trust.