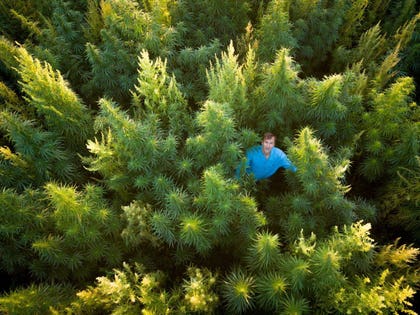 CEO John Roulac of RE Botanicals in a hemp field.

There is little doubt that public interest in cannabidiol (CBD), the non-intoxicating component of marijuana, has grown dramatically over the past few years, with CBD based products in the form of tinctures, vitamins, and body oils becoming available in many grocery stores as well as online. Substantial segments of the public believe that CBD products can help treat various conditions, including chronic pain, insomnia, inflammation and anxiety (for pets as well as humans), among others. In addition, an ad hoc committee of experts convened by the National Academies of Sciences, Engineering, and Medicine issued a report suggesting that there is some level of evidence (in some cases substantial evidence, in others moderate or limited) for CBD products helping with these conditions.

Yet, with the exception of Epidolex, a Food and Drug Administration (FDA) approved CBD product for treating rare, severe forms of epilepsy, the FDA and other authorities have not concluded that there is not yet sufficient scientific evidence in support of CBD products having therapeutic properties to warrant allowing health claims in advertising. Thus, companies manufacturing CBD products are generally not allowed companies that sell the products to make health claims in advertising and promotion.

While the FDA is sure to place additional focus on regulation going forward, there is little doubt about consumer enthusiasm, with an estimate released by the Brightfield Group indicating that sales of CBD-based products will increase by an astonishing 700% in 2019, making it a $5 billion market. The current situation with CBD appears to parallel Western attitudes toward Chinese herbal medicine in that there are large numbers of consumers of the product who swear by them working, yet regulators are not sufficiently convinced (one way or the other) of the products’ general effectiveness and express concerns that contamination or manufacturing errors can create hazards for consumers.

Given regulatory concerns about CBD, how can a company ensure consumers looking for relief that their product is authentic? One company, RE Botanicals, of Boulder, CO, is leading the way in this regard by both obtaining USDA organic certification, and by controlling quality in both the growing and manufacturing process. The company recently announced a merger with Palmetto Harmony (Conway, South Carolina). The new parent company combines the marketing and distribution savvy of John Roulac (formerly of Nutiva), with the organic hemp farming and processing facilities of Palmetto Harmony, founded by Janel Ralph. and will continue to operate both brands.

An RE Botanicals tincture product.

According to Roulac, a major goal of the company is to grow the share of organic hemp CBD products, which currently account for only about 1% of industry sales. Roulac says that control over the entire operation and its quality is a key differentiator for RE Botanicals. The 'flower-to-bottle’ nature of the operation is key” he states, „Nobody else is doing that.” Roulac emphasizes that hemp, the plant from which CBD is extracted from easily absorbs toxins (see video below) and, as such, a product that does not use fertilizer, is glycolate free and regenerative is superior. Moreover, he points to the company using industrial-grade MCT coconut oil at (vs. the olive and hemp oil) at a cost that is 50% higher, but significantly extends shelf-life. RE Botanicals also uses alcohol for extraction rather than ethanol and does not use „natural” flavors, also factors Roulac cites as being key product differentiators.

Attention to quality control in the growing. manufacturing and distribution process has paid off for RE Botanicals not only in their USDA organic certification but also with a perfect rating of 100 from the Center for Food Safety’s recent rankings of CBD brands. This rating takes into account the growing, processing, testing and transparency in labeling and promoting CBD products.

Roulac indicates that a major goal of RE Botanicals is to „expand the market share of organic hemp CBD products, which is currently about 1% to the 10-15% range in the near-term.” So far the company is moving in the right direction toward this goal, with sales growing substantially and distribution expanding in major outlets such as Safeway, Sprouts, HEB, Fresh Time, Earth Fair, Lucky’s Market, Lassens, Giant Eagle and Air One.

Promotion is a challenge for RE Botanicals and other hemp growers due not only to the prohibition of health claims in advertising but also to social media advertising restrictions.  Facebook, Google, and Instagram generally do not allow CBD advertising. As a result, RE works with different sites including vegan news site VegNews and works with influencers from various blogs. It also runs coupon programs based on its own email list.

Clearly, RE and the industry are benefitting from consumer word of mouth as well. And given restrictions on promotion, the ability to offer and label a product „organic” as well as being able to emphasize the „flower to bottle” aspect of production ensures both quality control and appeals to those concerned about sustainability and the environment.  As a result, RE Botanicals appears to be headed for even bigger success.