More than 200 insiders and people interested in getting a start in New Jersey’s growing cannabis industry gathered to talk about expanding medical marijuana program, trends in CBD and hemp — and if lawmakers will vote to legalize marijuana later this year.

While faltering efforts to legalize marijuana in the state have left Democratic lawmakers, social justice advocates and budding business leaders disappointed, the day’s speakers and panels focused on the opportunities that do exist. Those include ancillary businesses that aren’t directly involved in the production and sale of marijuana and the soon-to-launch hemp farming industry.

They also talked about shedding the stigma that surrounds the plant and creating equal opportunities for women and minorities. 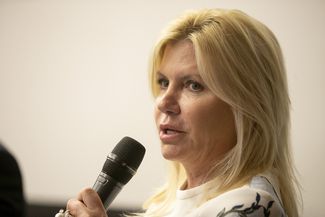 Beth Stavola, the CSO of iAnthus and Founder of CBD for Life, talks on a panel about what the current and future state of cannabis looks like in New Jersey on Wednesday October 2, 2019. (Aristide Economopoulos | NJ Advance Media)

“The cannabis industry isn’t a stoner selling weed out of the back of his van, as you all know, any more,” Beth Stavola, the keynote speaker and chief strategy officer of the cannabis company iAnthus, said.

Other panelists focused on how to comply with regulations, the necessary professionals businesses need to navigate the industry and how the Garden State should move forward. 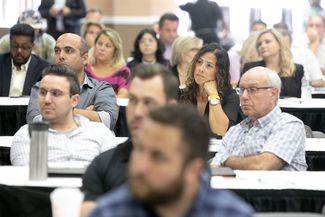 People listen to a panel about what the current and future state of cannabis looks like in New Jersey at NJ Cannabis Insider’s Live fall event, held at The New Jersey Convention and Exposition Center on Wednesday October 2, 2019. (Aristide Economopoulos | NJ Advance Media)

While some in the medical community have become more knowledgeable of cannabis, the lack of large scale research still presents barriers.

Dr. Robert Chapdelaine, a pain specialist, told a panel for medical professionals, “there’s a lack of basic scientific understanding of how the cannabinoid system works.”

When asked if he felt comfortable offering marijuana as treatment for pain, he called the drug “the lesser of two evils,” as it has provided an alternative to opioids. “We have options where we didn’t have options before.”

Lobbyists, activists and leaders said there’s still work to be done to move the needle on legal weed, like educating mayors and getting hold-out legislators on board. But they’re optimistic

“There are so many conversations,” said Colleen Mahr, president of the N.J. League of Municipalities. “But I do believe we are closer to the finish line. I do believe the state of New Jersey deserves to be commended nationally because we are tackling the legalization.”

New Jersey lawmakers will likely vote on marijuana during the legislature’s lame duck session between November and January. But no one knows yet if the vote will be on a proposed law legalizing weed or to place a referendum on the November 2020 ballot asking voters to decide.

“I do believe that all three legs of the political process in the state of New Jersey are aligned, motivated and sincerely trying to move forward,” said Bill Pascrell III, a lobbyist at Princeton Public Affairs. “It may not be the ultimate legislative draft we want to see. But like anything else, this is a game of ankle biting and moving the ball forward.”

Some don’t see the decision by Senate President Stephen Sweeney to cancel a vote on legal weed in March as a failure — the fact that the state came so close gives them hope.

“We were really close the last time. We punted, we weren’t sacked,” said Fruqan Mouzon cannabis chair at McElroy, Deutsch, Mulvaney & Carpenter, who is optimistic about marijuana legalization passing. “I’m not 100 percent sure it wouldn’t have passed last time.”