A foray into the world of cannabidiol facials, massages, and pedicures. 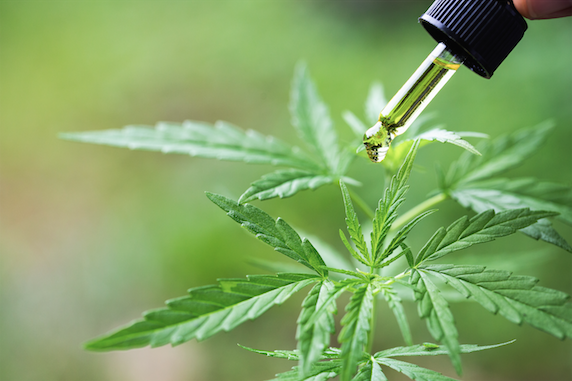 We currently live in an era of Big Wellness, a time when people think nothing about dropping $10 on varietals of non-bovine milk (or mylk, if we’re being wyld) or using “vaginal steaming,” “sound bath,” and “jade rolling” in the same sentence. Compare the wellness movement to pop culture, and CBD oil would be as big as, say, Lizzo or Beyonce, or maybe even the two of them combined into one megaforce of supernova stardom.

Anyways, you get what I’m saying—you can find CBD in coffee, CBD in tea, CBD in gummy bears, CBD in cocktails, CBD in cereal, and even CBD in pet water (which, as the 2019 gods would have it, is an actual thing separate from human water).

Simply put, CBD is like, one degree below pumpkin spice on the “OMFG-this-thing-is-everywhere” scale (which, fingers crossed, means we may get a CBD Yankee Candle or CBD Starbucks latte sometime soon).

Personally, I have the anxiety level of, say, a very nervous shih tzu let loose in the middle of the Macy’s Thanksgiving Day Parade, so I’ve started incorporating CBD into my daily routine by way of drops and gummies. (I’ve forever sworn off THC after a particularly potent strain led me to lock myself in a Myrtle Beach bathroom, where for an hour I alternated between contemplating my own imminent death and peeling the skin off chicken nuggets. It was college, what can I say?)

But how would I feel about the overlapping circles of CBD and beauty treatments? On one hand it makes sense: combine two spheres of self-care into one all-encompassing nirvana of personal improvement. But on the other hand, would such treatments translate as a wayward Venn diagram simply preying upon consumer fascination with wellness? That is to say, not do shit, except leave you smelling like a giant hempseed?

There was only one way to find out—I’d try them all myself, naturally. The trenches are a dangerous place from which to report, but I am basically the Christiane Amanpour of beauty writing. No need to thank me for my service, readers.

I was initially skeptical about a CBD manicure and pedicure—out of all the treatments I researched, it seemed to me this would be the most far-fetched when it came to actually reaping the benefits of cannabidiol. But I shouldn’t have doubted the bougie powers that be. After all, if you can milk an oat, you can give your digits a nice buzz, right?

After walking through the Mynd Spa entryway (which, as it was previously part of the Elizabeth Arden Red Door salon chain, has, yes, a quintessential red door), I settle into my chair in the spa’s pedicure area to await my technician.

It’s pretty par for the course: the pedicure sink is a little bathtub with a collection of rocks in it, not unlike a fish tank or one of those plug-in-the-outlet waterfalls they have in your therapist’s office; over the speakers, some mystical, Dances With Wolves jazz flute music wafts; along the walls hang abstract metal art pieces of indistinguishable meaning. (A commentary on the myopic meaninglessness of 21st century beauty ideals? An ode to toes? On sale at Pier 1? Who’s to say.)

When the technician begins the pedicure, she informs me that the CBD portion of the treatment will come from a special cannabidiol-infused lotion. She then leans down to take off my polish and whispers a quiet, quick oh my god, as if there, poking out from my pant legs, were two flippers instead of feet. Yes, to be fair, my calluses weren’t great after a summer of running (and a journalist budget that doesn’t allow for such indulgences as “self-care”), but I mean, come on, they weren’t that bad.

She is eventually able to overcome her shock, slaps on some loofah gloves, and we’re off! For the most part, the pedicure is the same as all other pedicures—some scrubbing, some clipping, some stone pumice-ing. But then she pulls out the CBD lotion. (Each bottle bears a technician’s name, as if to prevent theft and resale for a surcharge on a Goop knockoff site.)

She pulls on plastic gloves, puts some of the lotion on her hands, and begins to rub it in. And…it feels like lotion? I’m not sure what I expected, really—perhaps my pores opening into individual holes in the space-time continuum, through which I’m beamed into a world where things like space and time don’t even exist and your feet aren’t even feet, man. I don’t know.

But as she continues the massage, I begin to wonder…are my feet high? I can’t tell. I mean, I feel pretty relaxed, the Dances With Wolves soundtrack has seemingly evolved into some sort of New Age synth music that’d be fitting at an elvish wedding, and honestly, everything’s pretty groovy right now.

Post-massage, she puts tiny plastic dividers between my toes and in my blissed-out state, I wiggle them and giggle. It kind of looks like my toes are holding tiny joints! How funny.

By the time she makes it to the hand massage during my manicure, the elf music and CBD oil has done its job. It’s all over—I’m officially, totally, completely relaxed. But am I relaxed simply because I’m sitting in a chair sans cellphone and a woman is clipping my cuticles? Or am I relaxed on another level, one that’s attributable only to CBD? TBD on the CBD.

The CBD oil at Vida isn’t laced with anything, the masseuse tells me as she hands me a glass of mint water. No menthol, no essential oils, nothing. Just pure, 100 percent hemp, baby.

They use this sans-fillers CBD lotion because it’s the easiest way for a client to realize the helpfulness of CBD, she says, which she recommends for all kinds of ills. Headaches, sore limbs, torn muscles—you name it, you can CBD it.

In fact, the spa is so behind the CBD movement that later this year they plan to launch a CBD ritual. The treatment will incorporate cannabidiol in each step, starting with guests sipping CBD-laced chamomile tea before getting a CBD massage and a CBD facial.

But, for now, the only thing on their CBD menu is the massage, which, let me tell you, may list as one of the best experiences of my life (and I’m saying this as someone who once sat next to Jude Law at a play, okay?).

To be frank, this entry will be short because I don’t remember much about it. I blacked out immediately as soon as the masseuse closed the door to the treatment room. I’m not sure if I fell asleep or entered another dimension, but all I can say is that I woke up, it was over, and I really, really wished it wasn’t.

Now to be fair, any kind of massage is enough to send me into a vegetative-like state of zen (it’s my dream to one day make the kind of money that would pay for someone to walk around behind me and rub my shoulders at all times). But, at the risk of sounding like an infomercial, this treatment really works. The back pain and shoulder spasms I get from living in a cubicle felt so much better, and the undercurrent of anxiety constantly pulsing through my veins (again, shih tzu), was almost gone.

In my everyday life, I use CBD oil on my shoulders and back when they’re bothering me, but this will forever pale in comparison to having someone else (and a professional someone else, for that matter) do it for me.

I felt, like, peaceful afterwards, which is a feeling I sadly do not frequently experience. In fact, I was so chilled out and dreamy that I had to stop and get a humongous cold brew on my way to work, just so everyone wouldn’t think I was blazed out of my mind (which, in some ways, I kind of was, minus the whole locked door-chicken nuggets thing).

Like the CBD manicure, I was a bit confused as to how one could integrate CBD into a facial. Would there be some sort of CBD-infused steam component, like a mist-er at an amusement park, only with hemp? Or would the CBD be applied directly to my skin, and could that even be good for your face? Would my face even like CBD?

I flip-flop into the treatment room with my flute of champagne, my robe fluffy and light, my skin equal parts excited and scared. The aesthetician begins by cleaning, steaming, and exfoliating my face, examining my epidermis with the kind of huge light I imagine the government shines over the captured alien bodies at Area 51.

An aside: even if you don’t like facials, you should definitely go to this salon because, honestly, it’s the biggest pep talk of my life. The aesthetician keeps telling me what great skin I have (reader, my skin isn’t that great), and whispering “So beautiful, so beautiful” to herself as she putters around the room. She is so emphatic and effusive it would be weird if she wasn’t so sincere, and she basically brainwashes me into thinking I’m Gwyneth Paltrow. She’s not unlike one of the self-help leaders I’d imagine working on Oprah’s soulful cruise ship excursions, or perhaps a life coach with an uncanny interest in my pores.

This makes it all the more jarring when she reveals to me that I have broken capillaries under my eyes. I thought I was perfect?! I feel like I’ve let her down by exposing this harrowing detail of my body, this uncomfortable reminder of my humanity. But fear not, she assures me—I am still so beautiful, so beautiful. Plus, CBD helps with discoloration and blemishes, she says, and can be used to treat things like rosacea, broken capillaries, and, yes, just generally possessing a human body.

She then applies two CBD masks (one moisturizing, one not), followed by CBD serum and eye cream, which she massages into my face and chest to make sure the oil gets down into my pores.

I am deeply relaxed (which isn’t really a surprise, as I’m lying in a dark room, a glass of champagne deep, while a woman rubs oil derived from a cousin of marijuana into my pores). But, perhaps even better, I really think it works. I take a look in the mirror afterwards, examining my skin closely for any changes, and I have to say—I look like a freaking cherub, lounging youthfully and rosily on a tiny hempseed plant, as light and fluffy as an otherworldly cloud.

She was right, after all. I am perfect.

Mimi Montgomery joined Washingtonian in 2018. She previously was the editorial assistant at Walter Magazine in Raleigh, North Carolina, and her work has appeared in Washington City Paper, DCist, and PoPVille. Originally from North Carolina, she now lives in Adams Morgan.