An ex-convict and former gang member who started selling drugs at age 12 in San Francisco’s Haight-Ashbury neighborhood will open the first legal retail cannabis store on upper Haight Street, a landmark for both the former drug dealer and the western stretch of the street that’s most associated with illicit cannabis sales in the city.

Shawn Richard, the key store partner, is in line to be a beneficiary of the city’s Cannabis Equity Program, which helps people affected by the War on Drugs enter California’s legal cannabis industry.

“I grew up here,” Richard, 50, said in the store, under construction at 1685 Haight St. “Page and Stanyan. Three blocks away. I sold drugs on Haight Street. Being a business owner at Haight and Cole streets is a significant blessing.”

The cherry on Richard’s social- and business-justice sundae is Cookies, the multimillion-dollar cannabis and clothing brand founded, co-owned and directed by Berner, the San Francisco-born rap-cannabis-lifestyles mogul who has two cannabis stores in Los Angeles.

The deal underscores the financial needs of people harmed by the war on drugs who are trying to enter what’s now a legitimate industry. Richard partnered with Berner and Cookies to manage retail operations.

“You can’t do it alone,” said Richard, who owns 40 percent of the Cole Ashbury Group, the business entity that owns the store’s permit. “Equity partners have to have some type of big funding. Cookies has the funding to help us open up this store, and they understand the equity plan. And Berner is a hometown homeboy.” 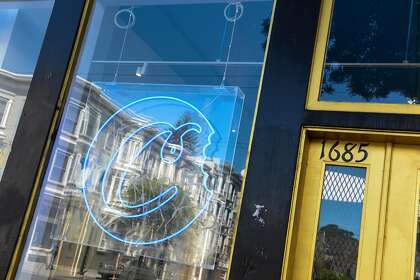 For Berner, a.k.a. Gilbert Milam, a Galileo High School dropout who made his bones in the cannabis industry in the 1990s working at the Hemp Center medicinal cannabis dispensary in San Francisco, it’s the first dispensary in his hometown under his direction. Berner has a licensing deal with another store in San Francisco bearing his Cookies name.

The dispensary is awaiting approval by the San Francisco Office of Cannabis and the California Bureau of Cannabis Control. Conor Johnston, one of Richard’s partners, said they haven’t named the store yet.

Whatever the name, it will look and operate similar to Berner’s two Los Angeles Cookies dispensaries, with lacquered floors that make shoppers feel as if they’re walking on water and a cerulean blue ceiling sparkling with starry LED bulbs.

Richard said the 800-square-foot storefront will be stocked with Cookies’ premium genetics and top local brands. An Equity Shelf will feature products from companies founded by people who benefit from equity programs.