Aurora Cannabis (NYSE:ACB) doesn’t make investors wait until the company’s financial reports each quarter to shed light on what’s going on with its operations. The Canadian cannabis producer has committed to „provide regular, quarterly updates to its stakeholders in an effort to demonstrate continued transparency and disclosure.”

On Thursday, Aurora released its latest business update. The company shared plenty of information about the status of its global operations and its growth initiatives. But you’ve no doubt heard the expression that „there’s an elephant in the room,” a reference to an obvious issue that no one wants to talk about. For Aurora, there was a big elephant in its recent update. 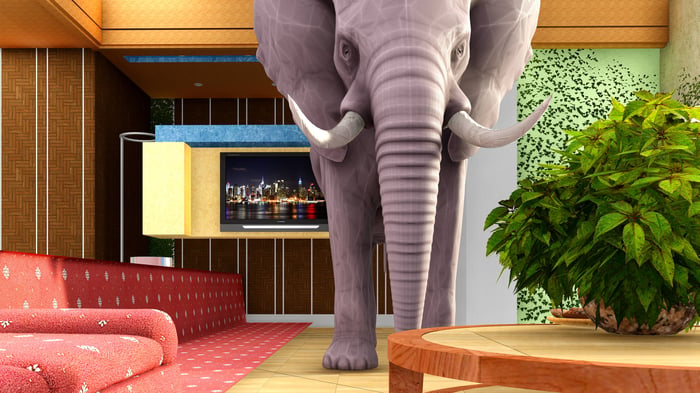 You can’t fault Aurora for not providing lots of details. The company supplied nearly everything you’d want to know about how its capacity expansion efforts are coming along.

Aurora CEO Terry Booth stated that the company’s 1.6 million square-foot Aurora Sun facility in Alberta „is nearing completion with the majority of capital investment now behind us.” The company has also made solid progress on its 1 million square-foot Aurora Nordic facility in Denmark. Booth said that „the primary outdoor construction, including the enclosure of the facility, nears completion.”

While Aurora’s Sky Class production facilities are its crown jewels, the company’s Aurora Polaris facility for producing products including edibles and vapes is also a key component of its growth strategy. Aurora said that staff should begin moving into this new facility in early November.

In addition, the construction of the company’s Whistler Pemberton facility should wrap up in the fourth quarter of this year. Four grow rooms for organic cannabis are already operational. Aurora also expects to finish construction of its cannabis innovation center in Comox, British Columbia in December.

The elephant in the update

Terry Booth said that „the Aurora team is working to advance several major strategic initiatives in Canada, the United States, and abroad aimed at further strengthening Aurora’s global position.” Aurora mentioned some efforts, including its recent agreements with two partners in the United Kingdom aimed at speeding up the delivery of more medical cannabis to the U.K. market and the company’s work with Ultimate Fighting Championship (UFC).

But the one glaring thing missing in Aurora’s update was any news about its quest to land a major partner outside the cannabis industry. Earlier this year, the company trumpeted its move to bring billionaire investor Nelson Peltz onboard as a strategic advisor to help secure big partners, particularly in the consumer packaged goods (CPG) industry. Since then, though, investors have learned practically nothing about how Peltz’s mission is progressing.

In Aurora’s fiscal 2019 fourth-quarter conference call last month, Booth said that the company had „gone on a significant MSO [multistate operator] review tour of the states” and added that Aurora’s strategic partners were „helping us talk to some of the top companies in the world” about the U.S. hemp CBD opportunity. He even mentioned that „probably 90% of my time is dealt on new opportunities.”

However, there was no information whatsoever in Aurora’s business update this week about any progress on finding a partner to enter the potentially lucrative U.S. hemp CBD market. Not even a hint.

Some might think that no news is good news. In this case, though, it’s fair to wonder if no news means there’s really no news. If so, that could be concerning for investors. Aurora is burning through cash like it’s going out of style. Competing in the U.S. hemp CBD market will be costly, making securing a major partnership more urgent for the company.

Speaking of burning through cash, Aurora faces the prospects of needing more cash to pay off convertible debentures of 230 million in Canadian dollars that mature in March 2020. The company is likely to go to the well again with another convertible debt offering, which means more share dilution is probably on the way.

Aurora hopes to have some good news with the upcoming launch of the Cannabis 2.0 market for cannabis derivatives. The company is focusing heavily on vapes and edibles rather than cannabis-infused beverages.

Investing in marijuana stocks often doesn’t come with enough transparency. It’s encouraging that Aurora is making an effort to keep investors updated on its business operations, but it’s time for the company to give at least a little more information about its partnership strategy. The elephant in the room for Aurora isn’t going to disappear until that happens.