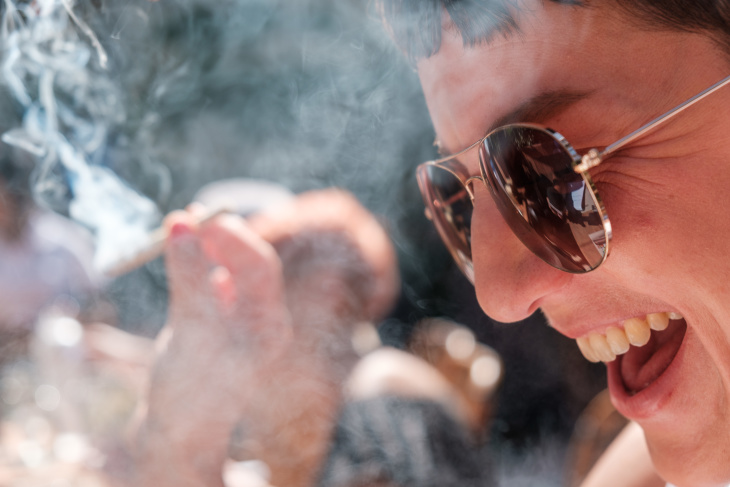 A patron lights up at Lowell Cafe in West Hollywood. (Chava Sanchez/LAist)

Now that smoking marijuana for fun and profit is legal in California, the only thing that’s criminal about Los Angeles’s first weed cafe is that it charges $14 for a bowl of chips and guac.

Technically, Lowell Cafe is in West Hollywood, near the city’s northeastern border on La Brea Ave. and it’s not simply the first legal weed cafe in the county — it’s the first one in the country. It officially opened to the public on Tuesday.

PR hype says people from around the United States and the world have made reservations to come here. I believe it — although I don’t totally understand why.

Don’t get me wrong, Lowell Cafe is lovely. 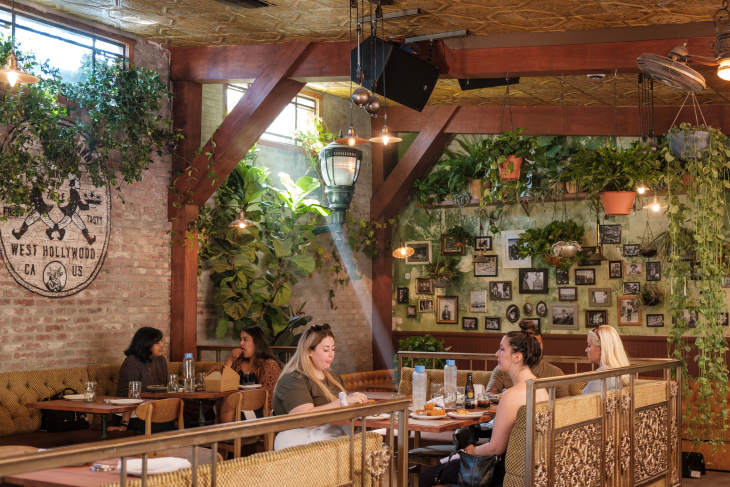 Inside, it’s large and airy, decorated in that eminently Instagrammable modernrustic style.

Outside, the patio is gorgeous with wooden tables crammed together under trees that almost make you forget the glass hoods sucking up marijuana smoke (neighbors were reportedly concerned the smoke would waft around and get everyone high).

The ambiance is chill and the vibe is laid back but precise. It would be easy to spend 90 minutes (the max amount of time you can linger during busy periods) here. 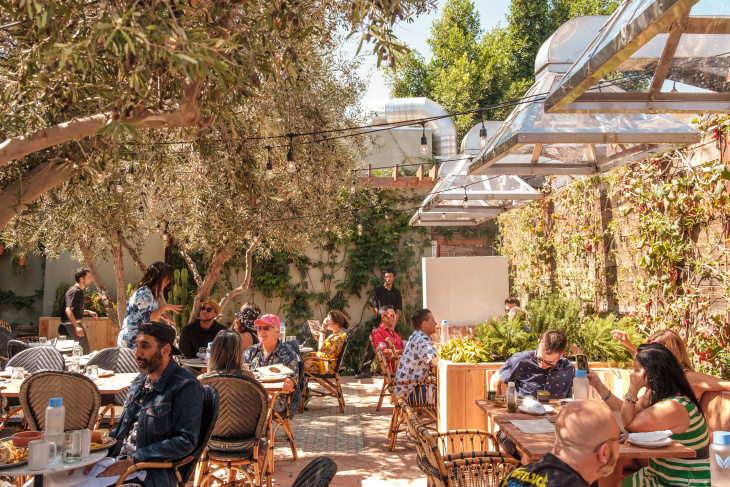 The open patio at Lowells Cafe offers plenty of space to grab a smoke. (Chava Sanchez/LAist)

You know the friend who spends 40 minutes applying rejuvenating serums, mussing their hair and picking out just the right pair of sneakers to go with those jeans so they look like they rolled out of bed perfectly dewy and stylish? (Maybe that friend is you. Maybe that friend is all of us.) Now imagine that friend is handing you a blunt and a plate of vegan nachos. That’s Lowell Cafe.

This is why the vegan nachos at Lowell Cafe were such a great surprise. I don’t know what sorcery makes the vegan cheese on this mound of black beans, onions, roasted cauliflower and chips so good and gooey, but it works. 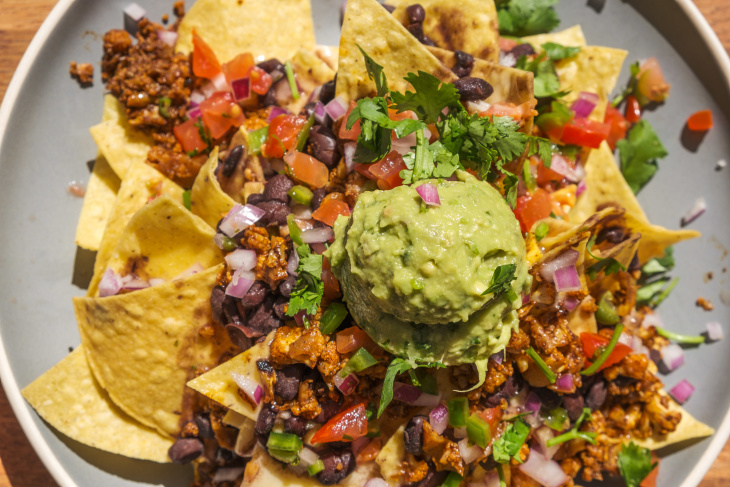 No wonder they’re named the „seriously better than vegan, vegan nachos.” And at $17, they’re only a few bucks more than the aforementioned chips and guac (which is a bowl of average guacamole and a handful of tortilla chips that taste store-bought).

The fried chicken sandwich is great, crisp and juicy with a few slices of pickle and a mild slaw. 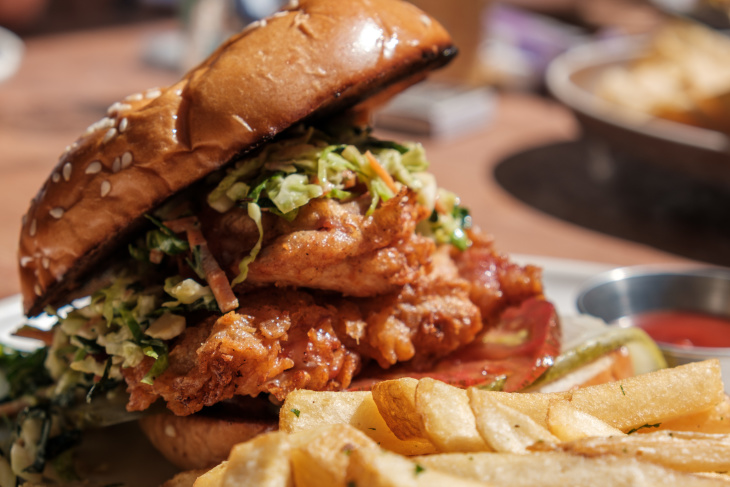 The rest of the menu is filled with salads, burgers, sandwiches and cafe/bar snacks like chicken wings, corn dogs, hummus, mac 'n cheese bites and, of course, avocado toast.

Everything costs a few dollars more than I want to pay, but maybe that’s the upcharge for enjoying cannabis-adjacent cuisine. Or maybe that’s just What Things Cost These Days.

All the food at Lowell Cafe is good enough to eat even if you’re not stoned. If you have a friend who doesn’t partake in weed, you could still meet here and enjoy a meal together. That’s precisely the point, according to chef Andrea Drummer.

„We wanted it to just be a normal thing, like if you were to go to a restaurant to have a glass of wine,” she told LAist. „We really want to normalize the idea of cannabis consumption and not make it abrasive or offensive. It’s classy.” 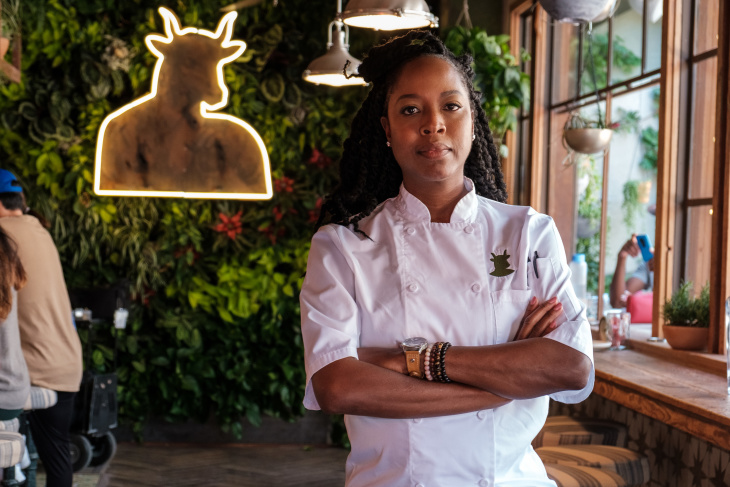 One thing Drummer doesn’t do at Lowell Cafe is cannabis-infused cuisine, although that’s how she got her start, experimenting with marijuana and food. „I’ve been doing pairings for a very long time. But prior to that, I was doing direct infusion. When I was first inspired to infuse food, it was because I was smelling the flavor profile of this California dream and it wanted to be something other than a brownie,” she says.

Drummer’s food is legit good but the most important thing about Lowell Cafe is that it provides people with a semi-public space where they can legally smoke marijuana. 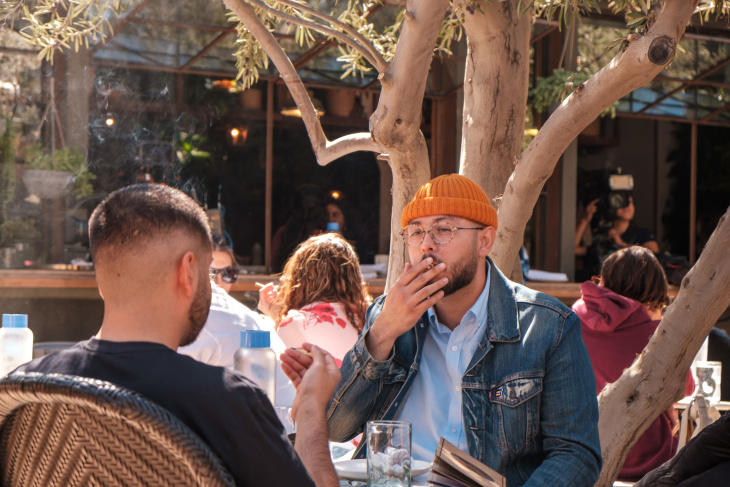 The open patio at Lowell Cafe creates a comfortable space for patrons to smoke while eating. (Chava Sanchez/LAist)

The weirdest thing about being there is just seeing people smoking anything in a restaurant, period.

If you live in California, you probably only see that hazy relic when you travel out of state or to another country.

Aside from the quirks of ordering and paying for your weed and your food separately — yes, we still have some pretty restrictive legislation around cannabis — Lowell Cafe is aggressively normal, and that’s what the upscale face of progress looks like. 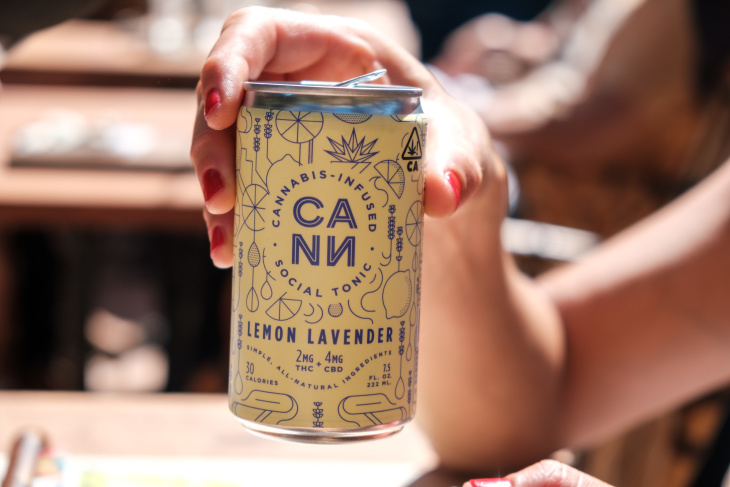 If you want to smoke marijuana and eat food at Lowell Cafe, here’s how it works:

Once you’re seated, you receive two menus, one for cannabis products and one for food.

On the former, you can pick from pre-rolled joints, pre-rolled cigarettes, edibles, cannabis infused teas and sparkling sodas, concentrates or loose weed (which you can smoke by renting a house bong; they’re cleaned and sterilized after each use). 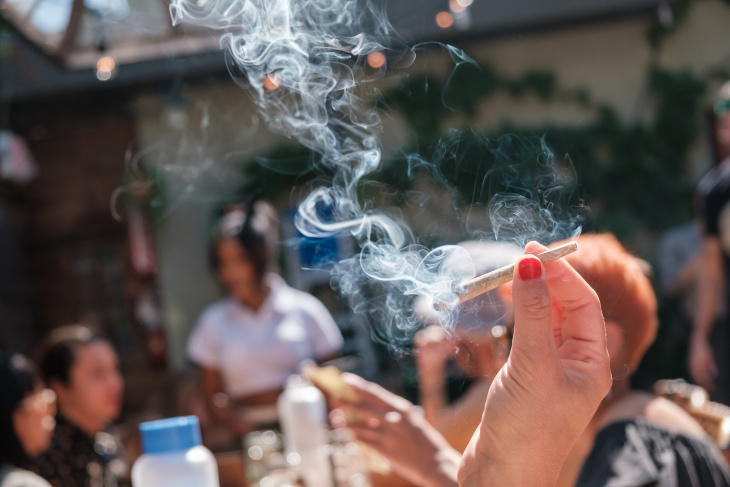 The menu notes the percentage of THC in each product. A lot of the stock is from Lowell Farms, located in Santa Barbara, but the cafe also showcases other brands. If you want to bring and smoke your own weed, you can do that for a $20 „tokage” fee. 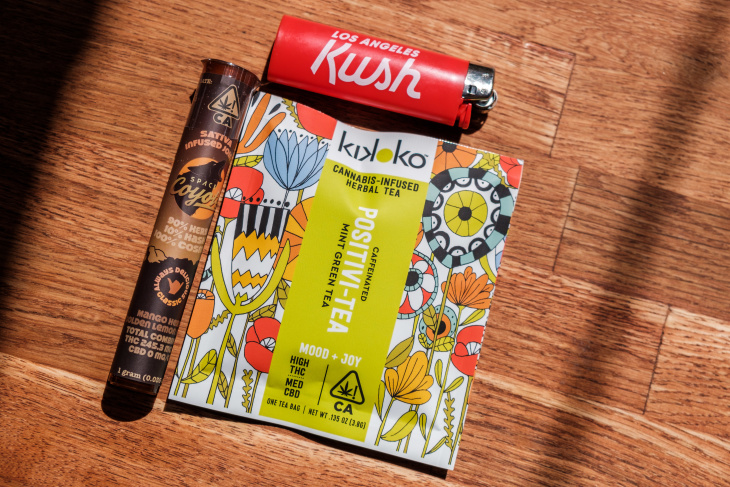 Space Coyote Hash pre-roll and cannabis-infused tea are among the many offerings at Lowell Farms. (Chava Sanchez/ LAist)

Don’t order more than you can smoke or consume on the premises because you can’t take your leftover cannabis products home with you. Besides, moderation is crucial. Our photographer spotted a patron who had passed out being carried out of the restaurant.

When you’ve decided what you want, a „budtender” comes to your table. They take your cannabis order and you pay for the THC right away, not at the end of the meal. Although we paid by credit card, you will need cash because the cafe can only „take a small number of debit card transactions.”

When your budtender returns with your goodies, they can even roll a joint for you.

Separately, a waiter comes and takes your order for food, which arrives after you’ve had time to enjoy your cannabis products. You pay for your food and drink at the end of your meal, just like in a „normal” restaurant. ⁣⁣

One thing you can’t do here is drink alcohol.

California law forbids alcohol from being consumed in a business where cannabis is being consumed, so all the drinks are non-alcoholic.⁣⁣ Vaping is also out. More than 1,000 people have beenk sickened and 18 people have died from a mysterious vaping-related lung disease, so Lowell Cafe is staying away from those products for now. 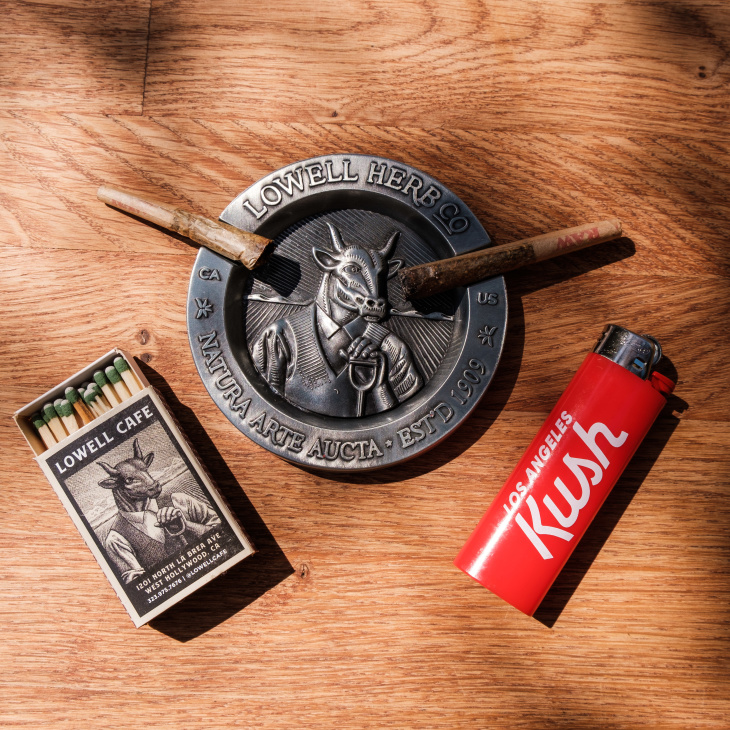 Matches, an ashtray and a lighter at Lowell Cafe in West Hollywood. (Chava Sanchez/LAist)