After years of delays, Maine residents will be able to buy their recreational pot in bricks-and-mortar stores this March. After some updates to the U.S. state’s marijuana laws, the Maine Office of Marijuana Policy is putting the finishing touches on the regulations needed to start accepting retail marijuana store applications by the end of the year. Maine is now projecting revenue from marijuana sales by mid-March 2020. Bloomberg News reports Maine’s rollout of legal cannabis has seen several stumbling blocks, such as hiring delays and former Gov. Paul LePage’s opposition to legalization.

Shares of Hexo plunged on Monday following the company’s announcement that its chief financial officer departed last week after just four months on the job. Hexo said Friday that Michael Monahan, former CFO of Nutrisystem Inc., had resigned effective immediately. On Monday, Bank of America Merrill Lynch issued a double-downgrade on Hexo’s stock, to underperform from buy, while reducing its price target to US$4 from US$9. While Hexo has given guidance it expects to report US$400 million in revenue by the next fiscal year, analysts expect its revenue forecast will be cut amid an expected second-half slowdown in the Canadian cannabis market.

A licensed California cannabis company was found to be making illegal products at the centre of the U.S.’s vaping health crisis. Leafly reports that thousands of illegal vape cartridges worth millions of dollars were seized from Kushy Punch after the company was served with a warrant by the California Department of Consumer Affairs. According to Leafly, Kushy Punch  was making cannabis extracts using a petro-solvent method, which can sometimes concentrate toxic pesticides along with THC. The extract was manufactured into professional-looking THC foods as well as disposable vape pen cartridges, Leafly reports.

Bearish market conditions are behind Breath of Life International’s decision to shelve its initial public offering on the Toronto Stock Exchange. The company pulled its IPO, which was set to raise $150 million for the Israeli-based cannabis company, as investors have flocked out of the sector. “We are sitting on the fence waiting for the market conditions to get better,” CEO Tamir Gedo told Bloomberg News. “When the market is ready to be bullish, we’ll go ahead immediately.” Breath of Life’s IPO was set to be one of the TSX’s “largest life sciences IPOs” before being shelved, according to a senior exchange executive.

$100,469,111
— The amount of cannabis private retail sales in Canada in September, little changed from the prior month, according to Cova Software. The company – which provides point-of-sale services for North American cannabis retailers – projects sales from 421 private Canadian stores in September, an increase from 373 stores in August. 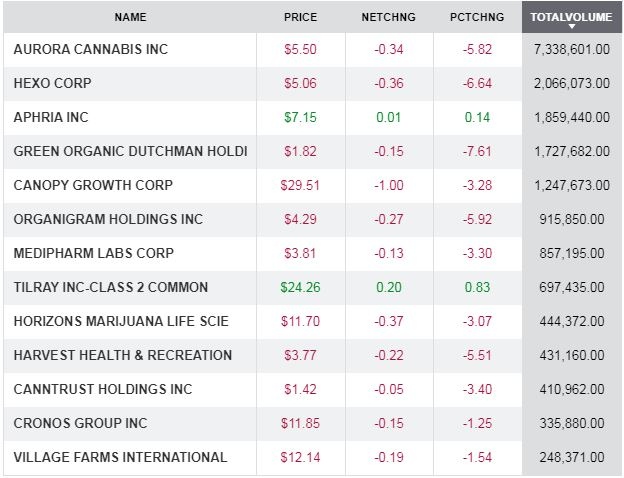