In contrast to the preceding week, last week lacked a momentous event such as the passage of the SAFE Banking Act in the House of Representatives.

Comparatively speaking, events with marijuana stocks were relatively low-key and not potentially the stuff of grand history. But still, there was a first. 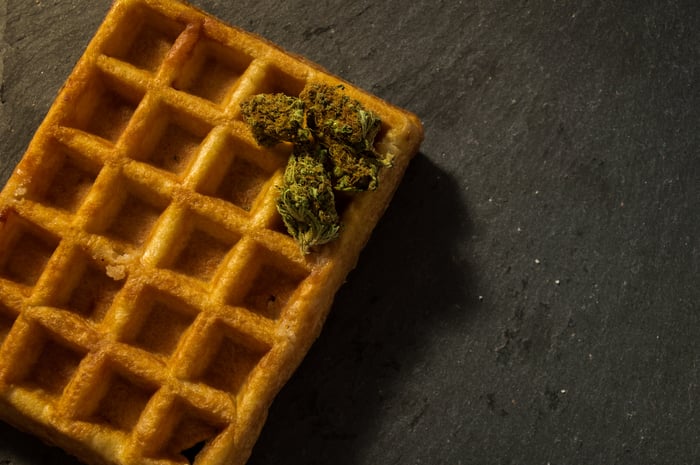 Cannabis is on the menu

Would you like a side of Indica with your banh mi?

You would never hear such a question at a traditional restaurant or bistro, but it’s entirely possible at Lowell Cafe. This licensed eatery, in the micro-city of West Hollywood within Los Angeles, proudly claims it is the country’s first cannabis cafe. Patrons can purchase and openly consume cannabis products in the establishment.

They can do so while consuming munchies from Lowell Cafe’s menu, which, loosely speaking, features modern California cuisine and a selection of hot and cold drinks, plus snacks and desserts for a customer base bound to be hungry. A separate menu features a limited selection of cannabis products.

Lowell Cafe is a short walk from my residence in Los Angeles, and although I haven’t yet visited, I’ve passed it several times. In each instance, there was a line of people waiting for admission — even on days and times traditionally slow for restaurants and cafes. Those would-be patrons don’t seem to mind that it’s operating under certain restrictions.

It’s early, but it seems as if this food/drink/cannabis mix is already a big hit for its owner, privately held Lowell Farms. Although dining and drinking establishments are notoriously difficult to make profitable, the potential for this particular concept is obvious.

A clever and determined marijuana company with capital — Canopy Growth (NYSE:CGC) perhaps? — could jump on this. There’s money to be made in developing a well-managed establishment or even chain of restaurants.

A new player in the CBD game

Many investors and pundits believe that for marijuana stocks, collaborations with more traditional businesses are a sensible way to gain legitimacy and growth. Perhaps with that in mind, Neptune Wellness (NASDAQ:NEPT) announced last week that it has found such a partner.

The company said it has entered into a relationship with International Flavors & Fragrances (NYSE:IFF) to develop cannabidiol (CBD) products derived from hemp.

In the press release trumpeting the new business arrangement, Neptune wrote that it „aligns well with our growth strategy of expanding core customers and of supporting consumer packaged goods companies and fragrance houses’ expansion into the CBD market.”

For better or worse, given the recent bearishness on marijuana stocks, the company will now be lumped in with the cannabis sector.

After the announcement, International Flavors & Fragrances stock basically traded sideways over the week. Investors seemed to be more impressed with Neptune’s snagging the deal; its stock was up by slightly more than 5%.

Neither movement was much of a surprise, as the arrangement will potentially affect the smaller Neptune far more than the large and well-capitalized International Flavors & Fragrances.

Acquisitions in the marijuana sector are relatively frequent. They also tend to have clear synergies — cannabis companies usually buy assets that are directly related to their business such as dispensaries, CBD product lines, and the like.

So it was a bit surprising when Canopy Growth announced midweek that it was buying a controlling stake in, of all things, a sports-drink maker.

That company is privately held BioSteel Sports Nutrition, which sells pre-made beverages and drink mixes geared very specifically to the active and busy athlete. In other words, hardly the customer base that would seem to be inclined toward cannabis products.

But this is a new world we’re living in, and acceptance of cannabis byproducts — particularly CBD — is becoming almost mainstream. And that’s the crux of this acquisition. Canopy Growth described BioSteel’s product lineup as „a significant platform to enter the sports nutrition and hydration segment.”

According to the two companies, there is great interest among the professional and sub-professional athletic communities in the apparent wellness benefits of CBD.

Since the cost of Canopy Growth’s purchase of its 72% stake in the company wasn’t specified, it’s hard to get a fix on how it’ll need to perform to make the investment worthwhile. Still, it’s an intriguing and creative move on Canopy Growth’s part, even if the CBD sports drink segment doesn’t end up being a significant revenue generator.