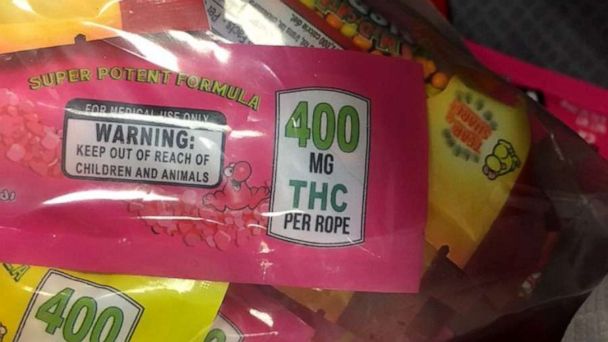 A police department in Pennsylvania is urging parents to be extra cautious with their Halloween candy this year.

Police in the city of Johnstown warned parents to inspect any candy they buy to make sure it doesn’t contain THC, the primary active ingredient in marijuana.

„Drug laced edibles are package (sic) like regular candy and may be hard to distinguish from the real candy,” a Facebook post from the Johnstown Police Department read.

The warning came after authorities issued a search warrant and found Nerds Rope candy that had 400 mg of THC per rope, according to police. Recreational weed is still illegal in Pennsylvania.

Yet one expert, who has been researching the phenomenon of „tainted” Halloween candy — an issue he said that pops every couple of years — told ABC News he’s never seen a credible threat in his 40 years of research.

„I’ve never found any evidence that anybody has been seriously hurt this way,” Joel Best, who also works as a University of Delaware professor, told ABC News. „I don’t think there’s any danger.”

He said the concern around Halloween candy usually correlates to a new public concern.

When recreational marijuana was legalized in Colorado in 2012, he remembered warnings that kids may be fed marijuana-laced treats.

This year, he noted, it lines up with vaping. The majority of lung illnesses linked to vaping were among smokers who used THC vape products, according to the Centers for Disease Control and Prevention.

„I’m sort of embarrassed I didn’t see this coming because it just squared up so nicely” with past concerns, Best said. „Something new comes along, and people get excited and start warning that civilization is gonna collapse, but civilization usually makes it another year.”