Sébastien St-Louis, seen here in 2017, is the CEO and co-founder of Gatineau cannabis company Hexo. The company, which provides Quebec with one-third of its cannabis supply, saw its stocks tumble precipitously at the end of last week. (Laurie Trudel/Radio-Canada)

A Gatineau cannabis producer that provides Quebec with roughly a third of its legal supply saw its stocks tumble Friday, in a week some analysts and industry representatives called „rapid panic.”

The stock trouble began after Hexo Corp. announced its fourth-quarter revenue for 2019 fell well below expectations, and at the same time withdrew its 2020 outlook.

„Withdrawing our outlook for fiscal year 2020 has been a difficult decision,” wrote Hexo chief executive Sébastien St-Louis in a statement.

„However, given the uncertainties in the marketplace, we have determined that it is the appropriate course of action.”

„The last week of stock trading in cannabis has been typical of rapid panic,” said Damas, an independent cannabis analyst and an author of the BCMI Cannabis Report.

Damas said Hexo’s revenue problems are emblematic of an industry going through a major shakeup as overall cannabis sales in Canada have not lived up to forecasts. 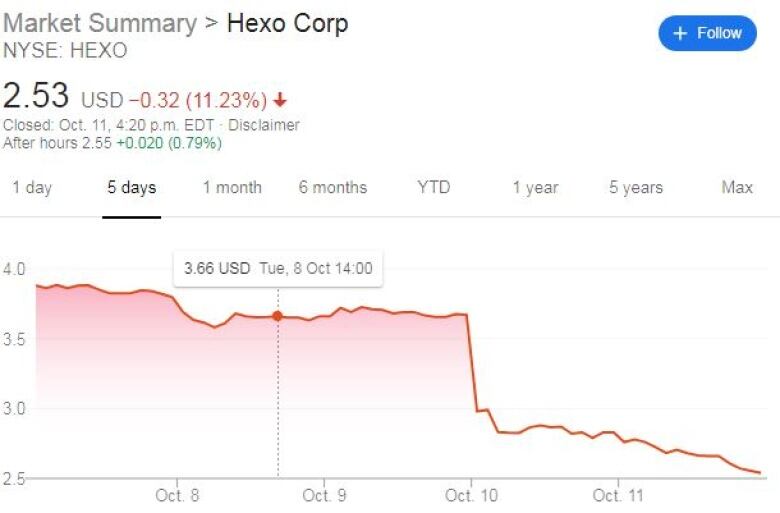 Hexo’s stock slipped nearly 25 per cent Thursday to close at $3.76 on the Toronto Stock Exchange. By Friday’s close, it was down to $3.35.

Hexo’s revised fourth-quarter outlook was also announced at between $14.5 and $16.5 million, significantly less than the $26 million in its previous outlook.

„While we are disappointed with these results, we are making significant changes to our sales and operations strategy to drive future results,” said St-Louis in his statement.

However the problem of lower than expected cannabis sales is industry-wide, and as legal pot nears its first year anniversary, the reasons are becoming clearer.

Statistics Canada has put the value of the cannabis market at $5.7 billion, and yet Damas said that by the end of 2019, it will have only produced a little over $1 billion in first-year sales.

That suggests that in the new era of legal pot, the black market’s presence is still keenly felt.

What’s more, a federal government report suggested that the total amount of dried cannabis held by cultivators, distributors and retailers stood at 347,171 kilograms at the end of July — more than 30 times the amount of total sales that month.

„We have an inventory glut, and we’re adding to it at a rapid pace,” explained cannabis analyst Craig Wiggins.

A Health Canada report released last October suggested Canadians could consume 920,000 kilograms of recreational and medical marijuana in the first year of legalization.  However, Wiggins said the legal industry has sold just 14 per cent of that projected supply to date — while producing four-fifths of that 920,000 kilograms.

„Think of the market as a glass of water, and it’s full. And we’re pouring more water into it. That’s our harvest,” he said. 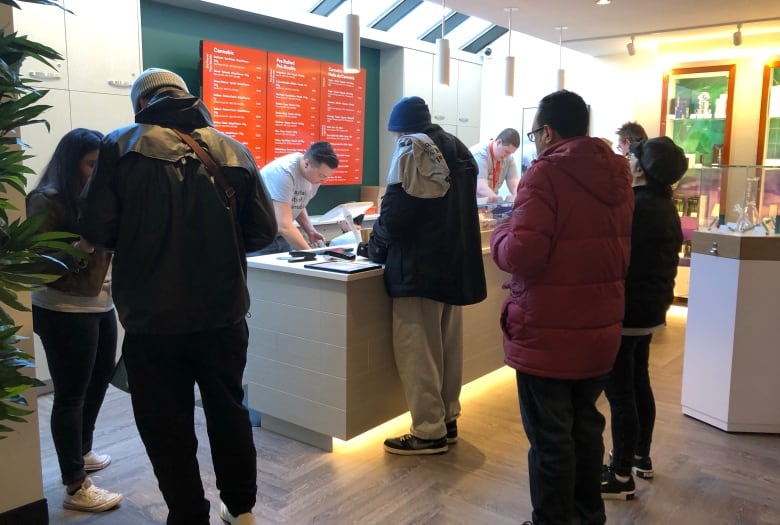 The statement from St-Louis also pointed to the difficulty of getting the product to market, something other licensed producers have complained about — particularly when it comes to opening stores in Ontario and Quebec.

Per-capita sales are higher in provinces like Alberta where there’s a large network of stores, said Keith Merker, CEO of WeedMD.

„Every challenge as this industry grows up has an impact,” Merker said.

Damas said Ontario should have roughly 1,000 stores to serve its population, noting Alberta has approved 284 store licences as of September while also having roughly 10 million fewer people.

„It’s been a catastrophe,” said Damas.

Hexo still has a contract to provide cannabis to stores operated by the Quebec government, as well as a deal to produce a cannabis-infused drink with Molson Coors when edibles become legal later this year.

However, when the company says in its statement it will focus on „profitability,” they could be eyeing cuts to their roughly 800-person workforce, said Gilles Levasseur with the University of Ottawa’s Telfer School of Management.

„The first thing you got to do,” said Levasseur, „is cut the costs. And cutting costs usually means cutting salaries.”

Hexo did not respond to CBC’s request for more details about their statement.

Wiggins also said the downturn in stocks across the industry will likely mean a shakeup, and he wonders whether there are now too many players making too much pot that no one wants to buy.

„The tide has rolled out,” Wiggins said. „And now we’re seeing who’s swimming with no clothes on.”