Gregory Rodriguez thought he had the flu when he went to the emergency room on Sept. 18, feeling feverish, nauseated and short of breath.

He woke up four days later in a different hospital, with a tube down his throat connecting him to a ventilator, and two more tubes in his neck and groin, running his blood through a device that pumped in oxygen and took out carbon dioxide. The machines were doing the job of his lungs, which had stopped working.

“I was basically on the verge of death,” he said.

Mr. Rodriguez, 22, a college student, is one of the nearly 1,300 people in the United States who have become seriously ill because of vaping. Like him, about 70 percent are young men. And also like him, many vaped THC, the psychoactive ingredient in marijuana.

Vaping is odorless and easy to hide, and Mr. Rodriguez slipped into doing it constantly, inhaling enormous amounts of THC and craving more. He decided to talk about it in the hope that his story might be a warning to other people under the false impression that vaping is safe.

“I want people to stay as far away as they can from vapes, especially THC vapes,” he said.

Lung illnesses linked to vaping were first recognized during the summer. The exact cause is still unknown. Toxic chemicals released from vaping fluids, or from the battery-powered vaping devices themselves, are among the suspects.

So far, 29 deaths have been reported. The youngest to die was a 17-year-old boy from the Bronx. 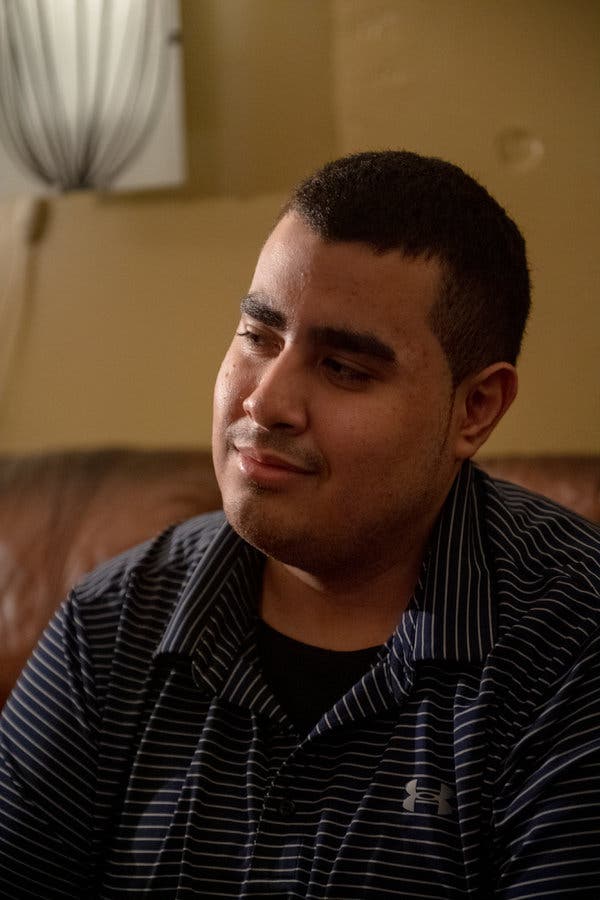 Gregory Rodriguez has been home since Sept. 30. “When I climb stairs, it feels like climbing a mountain,” he said. “When I run a couple of steps, it feels like I ran a marathon.”CreditHilary Swift for The New York Times

The lung damage looks like a chemical burn, the kind of injury caused by industrial accidents or the mustard gas used as a weapon in World War I, according to researchers at the Mayo Clinic.

So far, no vaping product is in the clear.

Mr. Rodriguez said he started smoking marijuana toward the end of high school. He has struggled with anxiety and depression, and marijuana, he said, “gave me some relief.”

But the smell gave him away, and his parents would not allow it in the two-bedroom apartment he shares with them and his older brother in Jamaica, Queens.

After about two years, friends suggested that he try vaping THC. He ordered a few vaping devices from Amazon, and found local THC dealers.

“When you’re in college, you always know somebody who knows a guy,” he said.

He would text a dealer and they would meet, usually in the dealer’s car. A cartridge holding a gram of THC oil cost $40, which Mr. Rodriguez would pay in cash, money he had earned from a part-time maintenance job at Kennedy Airport.

Vaping THC was “like a miracle,” he said. The high came on faster and felt more intense than when he smoked marijuana. Best of all, he said, “It was discreet.” There was no odor, so he could vape in his room, at school, on the street, just about anywhere, and no one would know. The device was small enough to hide in his hand. He also thought vapor would be safer for his lungs than marijuana smoke, even though it sometimes made him cough violently.

Vaping made it easy to take in more and more THC. When he smoked marijuana, a joint or blunt or pipe lasted only so long. But with a THC cartridge, he could vape for hours, with no need to roll a new joint or reload a pipe.

Eventually, Mr. Rodriguez was vaping much of the time. “I was never without it,” he said. His favorites included flavors like Fruity Pebbles and Sour Patch Kids. The few times he ran out, he could think about nothing but getting more, and sometimes, one of his legs would start shaking. A cartridge that would last most people four or five days, he would finish in a day or two.

“It was a habit, an addiction,” he said.

It is possible to become addicted to marijuana or dependent on it, according to the National Institute on Drug Abuse.

A computer-science student, he explored the dark web to find THC vendors with lower prices than he paid on the street, and turned money from his bank account into Bitcoin, to make purchases that would be encrypted and untraceable. On the electronic order forms, he requested the best and strongest THC available.

Boxes of cartridges, 25 for $400, started arriving in the mail early last summer. The return address was a house on a residential street in Ventura, Calif.

The products had a variety of labels, including Dank Vapes, the same name reported by many other people who got sick. It is not actually a brand, but a label that sellers can put on any product. Some of the other cartridges may have been counterfeit versions of brands that are legal in some states. No one knows what is in the knockoff products or who makes them, health officials say.

In August, distraught over the death of a dog his family had for 13 years, Mr. Rodriguez began vaping even more heavily.

In September, he started feeling ill, with headaches and severe nausea, vomiting and diarrhea. He waited several days, hoping to recover, but did not. He felt too sick to vape.

On Monday, Sept. 16, he went to the emergency room at Long Island Jewish Forest Hills Hospital, part of Northwell Health. Doctors said he probably had a stomach virus and sent him home.

Two days later, he felt worse, and had become alarmingly short of breath. His father, on the way to work, dropped him off at the emergency room at about 5 a.m. Embarrassed about vaping, and worried that it was illegal, Mr. Rodriguez did not tell anyone.

“I was hesitant to believe the vapes could be the cause of this,” he said.

The oxygen level in his blood was way below normal. He was given oxygen. Doctors suspected a lung infection, though they were puzzled because he was young and healthy and had not traveled overseas recently.

His mother, who works nights, arrived at the hospital a few hours later. She insisted that he tell the doctors about his vaping.

His condition deteriorated. By afternoon, he was on a ventilator. He still did not improve. By the next morning, his blood oxygen had sunk to levels low enough to cause organ failure, or even stop his heart.

“A 22-year-old gentleman, and he was, essentially, dying in front of me,” said Dr. Syed H. Iqbal, a specialist in pulmonary and critical care medicine at Long Island Jewish Forest Hills Hospital.

It fell to Dr. Iqbal to tell Mr. Rodriguez’s family how dangerously ill he was.

“It was terrible,” Mr. Rodriguez’s mother, Martha, said. “I will never forget the doctor’s face. I prayed, ‘Please, God, don’t let him go.’” She told the doctors to do anything needed to save her son.

Dr. Iqbal recommended a desperate measure called ECMO, a machine that would pump oxygen directly into Mr. Rodriguez’s blood and take carbon dioxide out — breathing for him while, if he was lucky, his lungs recovered. The hospital in Forest Hills did not have it, but the main campus of Long Island Jewish Medical Center did, and sent out an emergency team with the machine in an ambulance. As soon as Mr. Rodriguez was connected to it, his blood oxygen shot up to normal levels, Dr. Iqbal said.

Mr. Rodriguez was transferred to the main campus of Long Island Jewish Medical Center and was on the machine for four and a half days.

“Gregory was in danger of dying,” said Dr. Mangala Narasimhan, a lung specialist there and Northwell Health’s regional director of critical care.

“I think he was our 19th case,” she said. “It’s hitting us pretty hard, and that’s just the ones who are severe enough for us to know about.”

Mr. Rodriguez had extensive damage to the air sacs in his lungs, and widespread inflammation.

Dr. Narasimhan’s team treated him with steroids to quell the inflammation, and other medicines to open his airways. They also performed procedures to wash the secretions out of his lungs.

“The stuff coming out of his lungs looked like flan or custard, it was so thick,” Dr. Narasimhan said. “It was a lot of inflammatory cells. We had to do multiple rounds of washing his lungs out every day. After a few days, his lungs started to heal, and started working again.”

She said doctors do not understand why Mr. Rodriguez, like many other patients, had vomiting and diarrhea before the lung symptoms set in, but she said it may be a systemic response to a toxic substance or irritant that moves into the bloodstream after vaping and spreads around the body.

Mr. Rodriguez spent 12 days in the hospital. He has health insurance, and the family has not seen a bill yet, but they imagine the cost of his care will be astronomical.

“When I climb stairs, it feels like climbing a mountain,” he said. “When I run a couple of steps, it feels like I ran a marathon. The doctor said that what will help is I’m still young and I can get back into shape. Every day I get physically much better. It becomes easier to walk. I practice my breathing exercises.”

He went back to classes at Queensborough Community College a week and a half after leaving the hospital.

But psychologically, he is having a tough time, feeling anxious and depressed, and unable to sleep. His mother has taken a leave from her job to stay with him while he recovers, and his distress worries her.

“I feel like I am, in a way, going through withdrawal,” Mr. Rodriguez said. “I am going to therapy for substance abuse, and getting the help I need.”

He thinks marijuana products should be legal and regulated, so that people can be sure they are safe.

While he was unconscious and attached to the machines, his mother took a cellphone photo of him, so that she could show it to him later.

“The doctors and my parents told me the severity of my case,” Mr. Rodriguez said. “As you can imagine, I was a little bit shaken up. I had no idea what I was putting into my lungs.”