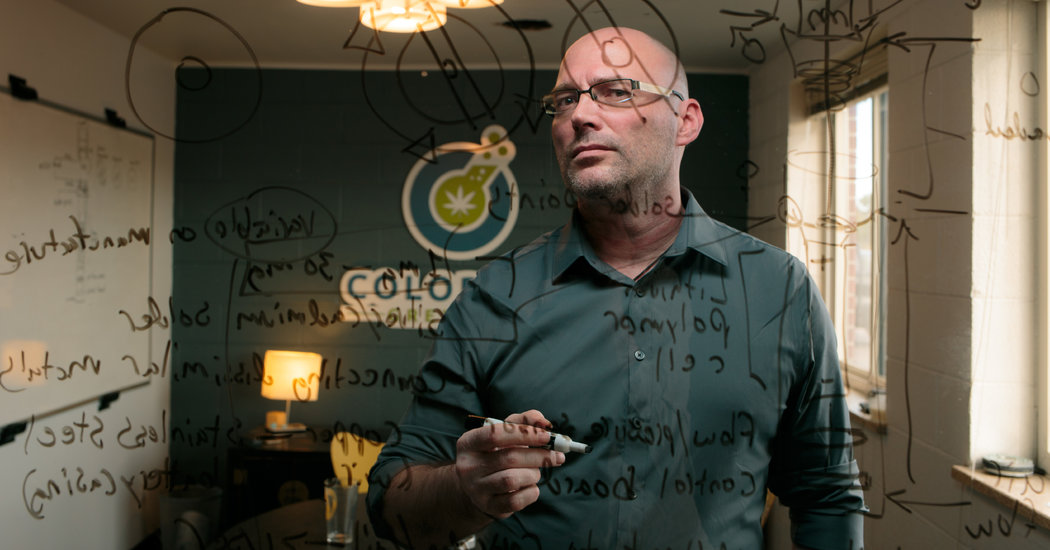 In June of 2018, Mark Pennington received troubling news from his ex-girlfriend, with whom he shared custody of their 2-year-old son. She had taken a hair follicle from the boy, she said, and had it analyzed at a lab. A drug test had returned positive for THC, the intoxicating compound in marijuana; evidently their son had been exposed to it, presumably in Mr. Pennington’s presence. He was told that, from then on, he would be permitted to see the child only once a week, and under supervision.

“I was mortified,” Mr. Pennington recalled recently. “My jaw hit the floor. I just knew from the bottom of my heart I hadn’t gotten any THC in my son’s system.”

However, Mr. Pennington had been providing his son with honey infused with cannabidiol, or CBD, a nonintoxicating compound that, like THC, is found in varying amounts in the plant known as cannabis. THC is federally illegal, and until recently so was all cannabis.

But last December, the Farm Bill legalized hemp — cannabis that contains less than 0.3 percent THC. With that, CBD became legal. It can now be found at stores across the country, in everything from tinctures and massage oils to coffee and makeup. Mr. Pennington, who lives in Colorado, where growing hemp for CBD has been legal since 2014, worked for Colorado Hemp Honey, a company that sells CBD-infused raw honey across the country.

Mr. Pennington was despondent about possibly losing custody of his child, until he spoke with Frank Conrad, the chief technology officer and lab director at Colorado Green Lab, a scientific consultant to the cannabis industry. Mr. Conrad directed him to a little-known study published in 2012 in the Journal of Analytical Toxicology that showed that a common forensic drug testing method could easily mistake the presence of CBD for THC. In short, the drug testing lab may have erred; it was entirely possible that the CBD Mr. Pennington had given his child had caused the drug test to produce a false positive for THC.

Two chemists with Cascade Chemistry in Eugene, Oregon, independently reviewed the study for The Times and confirmed the validity of the potential drug testing problem.

With Mr. Conrad as an expert witness, Mr. Pennington won equal custody. Now, on behalf of his son, he plans to sue the lab that did the drug test, to raise awareness of the problematic testing method, which could have broad implications for average Americans as CBD becomes mainstream.

“I can’t even estimate how many people this is going to screw over,” said Mr. Conrad, who has worked on a handful of cases similar to Mr. Pennington’s. (He is not working with Mr. Pennington on the lawsuit against the lab.) In one case Mr. Conrad consulted on, a couple in Florida was charged with marijuana possession after a CBD-infused gummy bear tested positive for THC. Another client was arrested for violating his parole after testing positive for THC, when he claimed he had only used CBD.

In every court case in which Mr. Conrad has explained the problem with this specific drug testing method, prosecutors have dropped the charges. “Anyone who’s on probation getting a random urine test — if this happens to them and they’re taking CBD oil, they’re going back to jail,” Mr. Conrad said.

Bruce Houlihan, director of the Orange County, Calif., crime lab and chair of the emerging drugs and opioids committee for the American Society of Crime Lab Directors, expressed concern. “If any labs are using this method, they’ll have to be careful,” Mr. Houlihan said. He added that there was no way to estimate how many drug testing labs might be accidentally mistaking CBD for THC, because forensic labs generally determine their methodology in house.

It is also difficult to estimate how many people in a year have suffered negative consequences, such as the loss of a job or parental rights, after testing positive for THC, because most drug testing data is private. Even data that is public can be difficult to parse. For instance, in many locales, official statistics around “drugged driving” do not distinguish between drivers who test positive for THC and those who test positive for other drugs, such as cocaine or methamphetamine.

Nonetheless, a drug test that identifies CBD as THC could have serious consequences. Even in states that have legalized marijuana, it remains legal for employers, child protective services, public housing authorities and other entities to test for THC. And in a survey conducted earlier this year by the investment bank Cowen, 7 percent of adults in the U.S. — 17 million people — reported using CBD.

The drug testing method in question involves a common chemical analysis device called a gas-chromatography mass-spectrometry, or GC-MS, machine. Most such devices require the drug testing lab to add a chemical to a sample in order to identify trace amounts of illicit compounds, in a process called derivatization. Labs can perform derivatization using a variety of chemical agents, but one of the most common is called trifluoroacetic anhydride, or TFAA.

According to the 2012 journal article, TFAA when used by a GC-MS machine was unable to discern between CBD and THC. If a person who used only CBD were given a drug test that employed this device, method and chemical, the results would falsely report the presence of THC.

Many labs have upgraded from GC-MS analysis to a more precise technique called high-performance liquid chromatography, Mr. Houlihan said. But tests using GC-MS are still common, he said, and many of those may be using TFAA.

“Most labs using GC-MS toxicology, you have to derivatize,” Mr. Houlihan said. “TFAA is a common derivatizing agent.”

Barry Sample, the senior director of science and technology at Quest Diagnostics, the biggest purveyor of drug tests in the country, said he was familiar with the problem outlined in the 2012 paper, but said Quest Diagnostics did not use that methodology. “We use a different analytical procedure,” Dr. Sample said.

However, a woman who was fired from her job last year following a urine drug test from Quest Diagnostics has claimed that a CBD product caused her to test positive for THC. Because she is in ongoing legal proceedings with her former employer, she asked to be referred to only by her middle name, Elizabeth.

Elizabeth had been taking the CBD product for a few weeks when she went in for a scheduled drug test. The company that produced the product is based in Colorado and appeared to be legitimate, she said, so she was shocked when she failed the drug test. “They were reputable,” she said. “They had their lab results on their website.”

Elizabeth has been in touch with Mr. Conrad, but he is not serving as a witness in her case.

CBD products sold outside of state-licensed marijuana dispensaries are not yet regulated. As a result, many products that claim to contain CBD in fact do not, or they may contain more than the legal limit of THC, according to testing done by the Food and Drug Administration. This could cause some CBD users to test positive for THC, and adds to the confusion surrounding THC testing generally. Dr. Sample said that this was most likely the problem with the CBD product Elizabeth had been using, and likely why her Quest drug test showed that she had used THC. But Elizabeth insisted that the CBD product she purchased did not get her high and did not have any THC.

“I didn’t break any rules, so I should not be losing my job,” she said, adding that she has struggled since her termination. “I’m nowhere near making the amount of money I was before, and I’m not really working in my field, either.”

False positives in drug tests are just one of many issues that have arisen as law enforcement authorities attempt to catch up with the rapidly shifting laws around the cannabis industry.

“Prior to opening up this whole industry, there was really no research done on these compounds, because it was illegal to do the research,” said Rodger Voelker, an analytical chemist in Oregon who helped develop the state’s regulations for the types and amounts of pesticides that can be applied to cannabis crops, as well as how to test for their presence in consumer marijuana products. “These compounds have been around for a long time, but people did not know much about the chemistries. Regulatory agencies are the slowest to move. It’s always reactionary.”

For instance, there is no accurate test or threshold to measure intoxication from cannabis; the best available tests can only show whether an individual has used marijuana within the last few days. This makes it nearly impossible to determine whether a person is driving while under the influence of THC.

“As the laws change and as policies change, we’re having to adapt our testing to keep up,” said Matthew Gamette, former president of the American Society of Crime Lab Directors and director of forensic services for the Idaho State Police. “That takes resources.”

Mr. Gamette has experienced the challenge firsthand. In early January, an Idaho state trooper seized nearly 7,000 pounds of cannabis from a truck, assuming it was marijuana. But the source of the cannabis, a company based in Colorado, insisted the plants were legal hemp, rich in CBD but not in THC.

The company sued the Idaho State Police, and the state spent almost a quarter-million dollars on new instrumentation to figure out how much THC the plants actually contained. The shipment remains in quarantine as the case moves through the courts.

“Even the states where it is legal for recreational use, like Colorado, are really struggling with this, because they’re trying to develop the methods, they’re trying to get up to speed on what they need to be able to do to comply with their laws,” Mr. Gamette said.

Back in Colorado, Mr. Pennington is also eager for law enforcement to better understand the science behind cannabis laws. Although he is grateful to have won his custody case, he is determined to use his son’s lawsuit against the drug testing lab to make sure no one else experiences what he did.