As a growing number of U.S. states legalize the medicinal and recreational use of marijuana, an increasing number of American women are using cannabis before becoming pregnant and during early pregnancy often to treat morning sickness, anxiety, and lower back pain. Although emerging evidence indicates that this may have long-term consequences for their babies’ brain development, how this occurs remains unclear.

A University of Maryland School of Medicine (UMSOM) study using a preclinical animal model suggests that prenatal exposure to THC, the psychoactive component of cannabis, makes the brain’s dopamine neurons (an integral component of the reward system) hyperactive and increases sensitivity to the behavioral effects of THC during pre-adolescence. This may contribute to the increased risk of psychiatric disorders like schizophrenia and other forms of psychosis later in adolescence that previous research has linked to prenatal cannabis use, according to the study published Oct. 14, 2019, in the journal Nature Neuroscience. 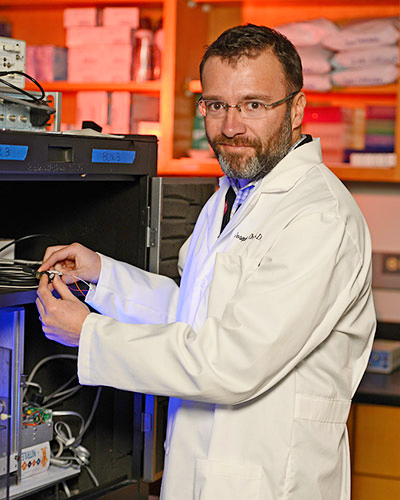 Joseph Cheer, PhD, a professor of anatomy & neurobiology and of psychiatry at the University of Maryland School of Medicine.

The team of researchers, from UMSOM, the University of Cagliari in Italy, and the Hungarian Academy of Sciences in Hungary, found that exposure to THC in the womb increased susceptibility to THC in offspring on several behavioral tasks that mirrors the effects observed in many psychiatric diseases. These behavioral effects were caused, at least in part, by hyperactivity of dopamine neurons in a brain region called the ventral tegmental area (VTA), which regulates motivated behaviors.

More importantly, the researchers were able to correct these behavioral problems and brain abnormalities by treating experimental animals with pregnenolone, a U.S. Food and Drug Administration-approved drug currently under investigation in clinical trials for cannabis use disorder, schizophrenia, autism, and bipolar disorder.

“This is an exciting finding that suggests a therapeutic approach for children born to mothers who used cannabis during pregnancy,” said Joseph Cheer, PhD, a professor of anatomy & neurobiology and psychiatry at UMSOM. “It also raises important questions that need to be addressed such as how does pregnenolone exert its effects and how can we improve its efficacy? Do these detrimental effects persist into adulthood, and if so, could they also be treated in a similar way?”

The researchers concluded that as physicians caution pregnant women against alcohol and cocaine intake because of their detrimental effects to the fetus, they should also, based on these new findings, advise them on the potential negative consequences of using cannabis specifically during pregnancy.

“The risks associated with maternal use of cannabis should not be underestimated, and this new research highlights the importance of studying the pathways that lead to neurodevelopmental adverse events,” said E. Albert Reece, MD, PhD, MBA, executive vice president for medical affairs at the University of Maryland, Baltimore and the John Z. and Akiko K. Bowers Distinguished Professor and Dean, UMSOM. „It is also important, however, to keep in mind that this is preclinical research and that the findings should be replicated in humans to the fullest extent possible.”

The study was funded by an international collaborative program on marijuana research issued by the U.S. National Institute on Drug Abuse, the National Research, Development and Innovation Office of Hungary, and the University of Cagliari as well as private European foundations.