Aside from the obvious disparities in size, Canada’s older adult population, like that of the US, is increasingly discovering medical marijuana. And CARP (formerly the Canadian Association of Retired Persons) has a long-running and multi-faceted advocacy approach, including a discount program with the nation’s leading cannabis LP, to help members understand and access cannabis medicine.

I spoke by phone with Moses Znaimer, President of CARP, about the work they do on behalf of older adults, and his view of the process as the country’s legal cannabis program enters a new stage.

Abbie Rosner (AR): Is CARP Canada’s version of our AARP?

Moses Znaimer (MZ): We are the analogous organization, although AARP has been around much longer. CARP is about half the age of AARP. And the US has a much larger population, so it has more velocity from that. In addition, the biggest reason to join AARP used to be to access health insurance coverage after retirement. But in Canada, we have had socialized medicine for decades, so that’s a very important difference.

AR: AARP recently took a very vocal stand about the need for education on medical marijuana for seniors. What has CARP’s record been on this issue?

MZ: CARP has been well ahead of the curve regarding cannabis. As far back as a decade ago, we endorsed the idea of decriminalization first, and then legalization. And, even before that, I myself was active in the movement that led to that coming about politically. Beyond that, we have polled our members from time to time and learned that they are comfortable with cannabis, especially from a medical point of view.

Right now, we have an arrangement with the largest marijuana producer, Canopy Growth, so that, if you are a CARP member, you can receive certain strains of medical cannabis that carry the CARP recommended seal for a significant discount (20% off). For patients who may spend as much as 4 to 5 thousand dollars a year on this medicine, this can represent a savings of a thousand dollars a year, or more.

AR – Can you explain about that CARP-recommended seal and how it got applied to cannabis?

MZ: There is a CARP seal we are willing to grant, like the Good Housekeeping Seal of Approval, to companies that offer either products that are created with our gang specifically in mind, or, for which they offer a substantial advantage, like a big discount.

With cannabis, for many years, we had a well-developed gray market system in Canada that provided very high quality product from reliable providers across a broad range of choice and price points…. So those were the halcyon days of the informal market.

Then the legal authorities came in and birthed a bizarre system of wholesale distribution and retail which is baffling and sometimes flat-out stupid, especially in the province of Ontario. This has impeded progress, because there is a pent-up demand behind legalization. Many people were curious but didn’t want to be on the wrong side of the law. So now we have the law begrudgingly delivered, but people who want to have access are hampered on every side.

AR: And yet, many older adults who don’t want to be on the wrong side of the law do have the opportunity to try medical cannabis. In spite of all the obstacles, do you see that happening?

MZ: Yes. I do. At that point, when they seek advice, they turn to an organization like ours where they can get that information in various forms. Because CARP is aligned with ZoomerMedia, which has not only a great magazine like AARP, but also radio and television stations that focus on this demographic. Zoomer magazine has two million readers per issue and is just about the only magazine in Canada that is actually growing.

MZ: Zoomer stands for Boomer with Zip. There’s a lot of gusto left in these people. Most of us are living healthy and longer and have decent means. We must take care of all those who don’t, but portraying the entire demographic as decrepit and broken down, and sapping the national treasury, is just wrong. So we also spend a lot of time in projecting the vitality of this demographic, and the necessity to keep moving.

AR: And ZoomerMedia has programming on cannabis?

MZ: Yes. We originate a channel called ONE: GET FIT that is ramping up its focus on cannabis right now. It currently specializes in yoga, meditation, healthy living and cooking, but we are turning it into more of a marijuana information channel, with various program components, short and long, with the overall positioning of “Cannabis for Beginners.”

We’re all treading softly because the legislation is ambiguous, the application erratic, and the local authorities somewhat disorganized. So it makes us all hesitant when we should be fully engaged in a robust explanation of how this all works.

The reason everybody is interested in our demographic is that it’s the one that is actually familiar with marijuana from the good old days. People know that they can have a toke and not end up in the gutter, and that it can be useful for various medical needs that people have discovered for themselves.

They might have been active tokers in the 60s, 70s and 80s, but as they entered a more mature period of life and were around people who didn’t smoke, they stopped. But now they want to go back and they look to organizations like ours for information and advice. 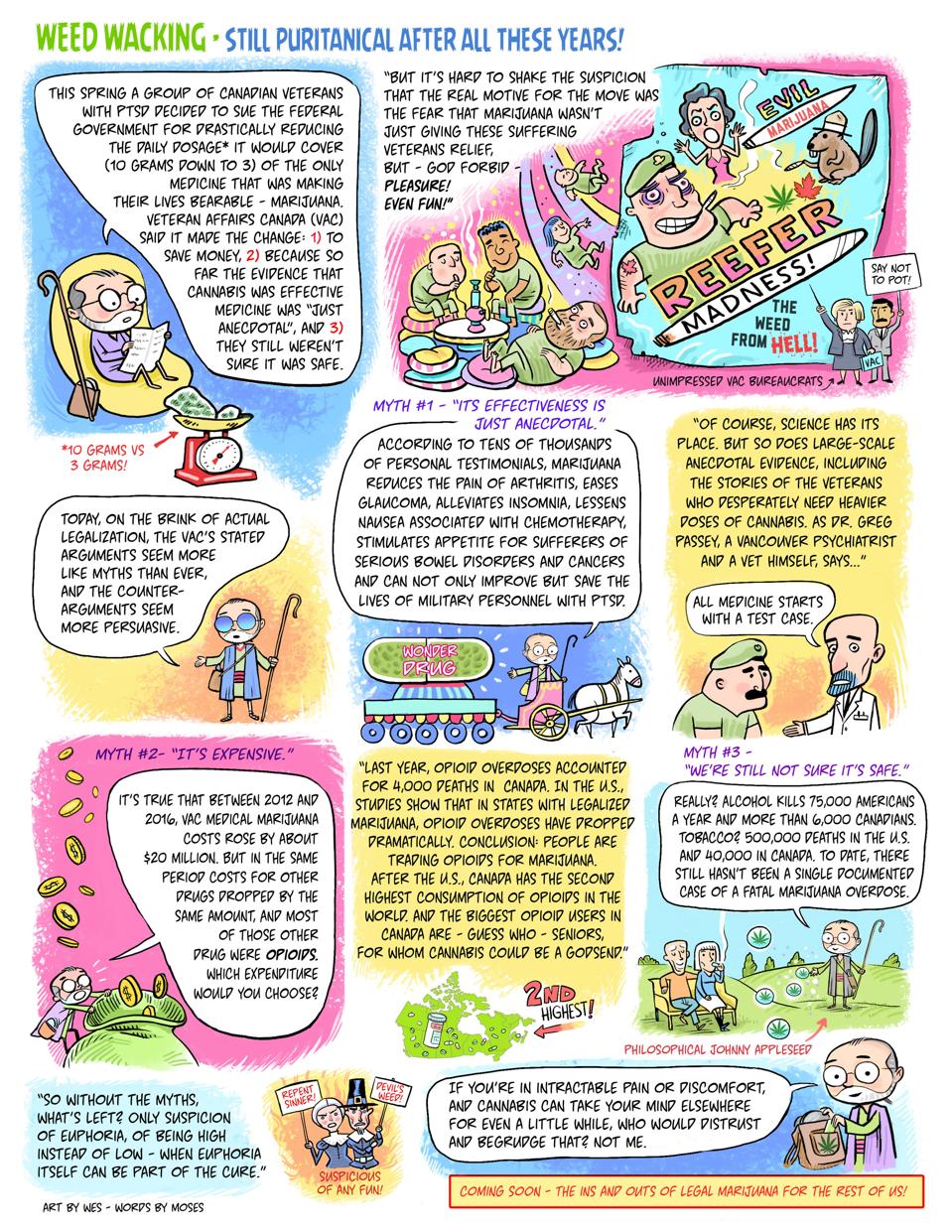 MZ: Yes, because I think too great a reliance on too many conventional drugs can be debilitating. Taken one at a time, these drugs can be miraculous. But many older adults are taking handfuls of them, all at once. So anything that can take you off one of those, and put you on something that is herbal and natural, and well-documented to be less harmful, that’s a good thing. If you can have a puff or two instead of taking a sleeping pill, that’s a good thing. Among Canadian Armed Forces Veterans with PTSD, an increase in the use of cannabis has correlated almost perfectly with a decrease in the use of opioids.

AR: In the US, the AARP is a force to be reckoned with, but it seems that CARP is too. You are looking from close up and complaining, legitimately, about how the legislation in Canada is unfolding. But I’m thinking of the situation here in the US, with Federal prohibition and a patchwork of state legalization. So Canada may have growing pains – this is new territory – but maybe we should be more forgiving because you are leading the way in terms of cannabis legalization, and pioneers will always make mistakes as they blaze the trail. It’s the nature of the game I think.

MZ: Well, there’s probably some truth to that, and we will keep punching away at it.